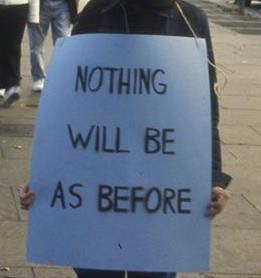 OccupyLanguage is a working group that encourages the staging of readings in public spaces, and especially via public transportation.

What works/text would you wish a public to hear read aloud? Which may overturn or redistribute a common sense? Which may lead to argument, debate, provocation?

OccupyLanguage meetings are held Sunday evenings at 8pm at 60 Wall St., after the Poetry Assembly general meeting. Each week, a new project proposed by a member of the collective will be performed based on a set of guidelines.

We will reconvene weekly to consider the effectiveness of the texts read aloud, and the kinds of interactions the readings open up in different public spaces. Treat it like a workshop. What worked and what didn’t? What did people find interesting, and why? What led to dialogue, emotional response, enjoyment? We want to invite a certain kind of cooperation in "reading," avoiding traditional styles of unidirectional address which lead to distracted listening and/or echolalia. We might also consider if the readings act as a kind of public service announcement. Not soapbox-style diatribe, but the limited broadcasting of texts that have been carefully considered in advance as something you would want a stranger to attend.

The committed citizens occupying Zuccotti have made us believe again that public space so-called is worth occupying: putting our bodies into it, holding conversation and symposia there. And that such gatherings in the spirit of commons—to be among one another in debate, discourse, and struggle—are a good unto themselves.
Posted by Thom Donovan at 5:46 PM