For The Mobile Archive

In space forming between
The people and the
Multitude the people

For so long but which
Hasn't defended me
Art becomes a defense.


Checkpoints and time
Which embodies you
If they have tried

To disaggregate your
Collective experience
Of time perhaps it

Is this disaggregation
Which becomes common
A bond formed

Where we could not
Be the constant
Impossible transit

Pass that was our
Imaginary the ghost
Of those who couldn't

But had to pass through
Solid walls the loss
Of those who wouldn't.


I hear your blood
It will not be like

My blood through this
Wall it will be like

The world disappeared
And for a moment

We discovered a new
World where our blood

Should have been
A trace where those

Bodies won't be out-
lined a place where

The bombs don't
Continue to strike in

Our minds for zero
Sum games these

Softer powers of
Diffusion having no

Tarrying with what
God could be instead.


But there are not
Even videos here
Which could account

For those ruins
But if there were
Videos which could

It means to be
Ruined they would
Be here they would

Be here a million
Miles from nowhere
In the desert of

Our conversation
The certain distances
Of our discourse.

We're fucked if all we're doing
Is saying things if we're only saying
Them in the way they're supposed
To be said our love's all talk.
Posted by Thom Donovan at 8:51 PM No comments:

Based far from New York and each other—Poland, Los Angeles and Chicago—Metro Pictures brings together new work by each for this season-opening exhibition.

Paulina Olowska's 5 large-scale collages use an autobiographical narrative featuring a young couple riding in a vintage Volkswagen convertible under a large umbrella that shields them from the dynamic and dangerous: taxes, former loves, desires, doubts and the past. These images relate to Olowska's 2007-2009 sculpture Car Mobile, a large Calder-esque steel mobile that will be installed in Miami in December. The collages are silkscreen on paper and fabric, with gels, tape, foil, oil marker and crayon.

Stephen G. Rhodes combines video, painting, sculpture, photography and drawing to weave history and memory, reality and fiction in ambitious and complex multimedia installations. This new work is based on the Disney theme park attraction The Hall of Presidents and centers on dual video projections mirroring each other inside an upturned Oval Office. Each video features the remains of Animatronic versions of Presidents Lincoln and Washington enduring numerous indignities including being bullwhipped. Also in the installation are two of Rhodes' Vacant Portraits, paintings that reference the dull portraiture found in local banks, country clubs or The Hall of Presidents. Rhodes paints the sitter as abstracted ghostly residue. This series was introduced with a cacophonous installation shown in New Orleans as part of Prospect 1 in 2008.

Catherine Sullivan's new single-channel film LULU – Or: To What Ends Does the Bourgeoisie Need Despair is based on the 1978 affair between silent film star Louise Brooks and British theater critic Kenneth Tynan who was also the creator of the erotic musical review Oh! Calcutta!. Sullivan's work consists of original film as well as appropriated footage from a televised 1971 production of Oh! Calcutta! and Brooks' 1929 film Pandora's Box. Sullivan restages the climax of Pandora's Box (a scene in which Brooks' character Lulu is murdered by Jack the Ripper) portraying Kenneth Tynan as Jack and the elderly Louise Brooks as Lulu. Characters derived from Oh! Calcutta also inhabit the interior where this scene takes place. The film fuses all of the footage through overlays and dissolves, hoping to create the effect of Tynan's sexual imagination.

Stephen G. Rhodes was born in 1977 in Houston and lives and works in Los Angeles. He attended Bard College in New York and Art Center in Pasadena, California. He has had recent exhibitions in New York, Los Angeles, Tokyo and Berlin and was included in Younger than Jesus at the New Museum (2009) and Prospect 1 in New Orleans (2008).

Catherine Sullivan was born in 1968 in Los Angeles and lives and works in Chicago. Her numerous one-person exhibitions include the Walker Art Center, Minneapolis; the Tate Modern, London; Secession, Vienna; Kunsthalle Zürich, Switzerland and The Renaissance Society, University of Chicago.
Posted by Thom Donovan at 2:38 PM No comments: 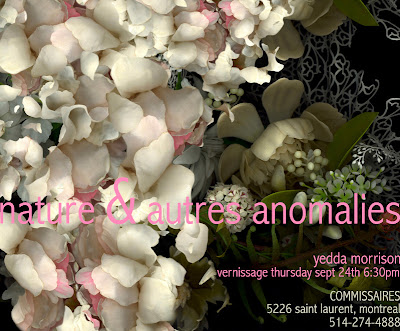 Check out Yedda Morrison's website featuring works from her upcoming show in Montreal, "Nature & Autres Anomalies." Among a hand-full of younger contemporary poets and visual artists, Morrison is pushing the envelope of her visual and language-based art practice, which is devoted to an examination of natural exploitation in relation to the subjugation of women and "others." In her work, the treatment of nature (both imaginal and real) becomes a thin limit for a viable human rights and fair labor practices. Her work proves language (both visual and word-based) to be utterly complicit with ecological welfare and justice as it extends justice among a potential multitude.
Posted by Thom Donovan at 11:08 AM No comments: 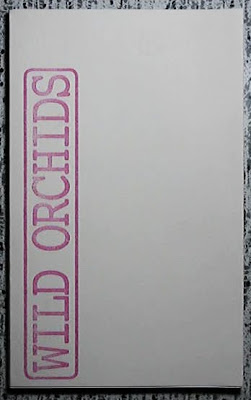 Check out the debut issue of Wild Orchids, edited by Robert Dewhurst and Sean Reynolds here. The first issue is dedicated to (Herman) Melville and features writing by Kim Evans, Benjamin Friedlander, Jennifer Scappettone, Stacy Szymaszek, and many others. Being personally invested in what Dewhurst calls "affected/inspired forms in literary criticism" I am looking forward to reading what the editors have in mind.

"WILD ORCHIDS is an annual journal of affective/inspired forms in literary criticism. Our issues hope to reencounter, write close to, and trace the unlit flows of our favorite writers, in volumes centered around single authors.

We are currently reading submissions for our second issue, which will take shape around the life and writing of NYC poet HANNAH WEINER. Unsolicited submissions are encouraged, but please have a look at our first issue before offering to contribute. Thanks to my Bard College Language & Thinking students this summer for making it the best workshop yet. I am still listening to the CDs from our mix swap and preparing a mix of my own for an eventual care package. Special thanks to Becca Franks for sending along the above group photo.
Posted by Thom Donovan at 12:58 PM No comments: