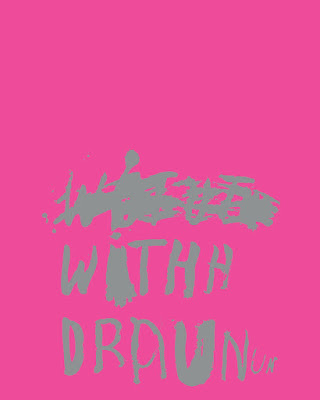 Composed between 2009-2012, Thom Donovan’s Withdrawn engages a social and political landscape through a densely speculative and intertextual lyricism. Proceeding through dedication and interlocution, the poems are ones of encounter (with art works, with specific individuals and communities, with social configurations and political events) where friendship, sociality, and politics interarticulate one another. Not unlike Arthur Rimbaud’s poetry in relation to the Paris Commune of 1871, the poems in the second half of the book write through the Occupy movement, resulting not so much in ‘Occupoems’ as meditations on a collective enunciation in the midst of its emergence. These poems might be said to be “meta-political” (or “meta-social”) inasmuch as they are reflections on the potential for (as well as the failure of) sociopolitical subjects to come into being. Through the proper name, others are called into urgent relation, an expression of both the actual (the world as it is) and the prefigural (the world as one would want it to be). In its non-discursive proclivities, poetry withdraws from meaning, taking flight into prosody (stress, sonority, noise) to record a politics without a proper locus—anterior, preposterior, post-expectant.


Excerpts from Withdrawn: a Discourse (Shifter 23):

Let’s remember that singing is the most complete of the physical endeavors, it unites body and soul like nothing else—this is why it started on the fields, there, where the spirit evaporates under the fusion of the temperature of the air and the pain of the body, and in the interstices, a strange feel of freedom takes place. What keeps Thom’s world convincing is his profound conviction that “the possible doesn’t end with words”. But we have words (most often, nothing else) and we use them, some of us, capable of doing it, create songs, “songs the object, and songs the subject”, and ripples are sent, going the goddess knows where!


I still don’t know how to talk about Withdrawn, but I want to say that it mystically catches us “Dreaming when we cannot see / Waking from the archive again.” That it is here Thom’s complicated we that itself is the archive: we, unaddressable, in an inverted state of apocalyptic address. We, the bodies in whom all speaking is dispersed. In the face of a total vacuum of meaning, Withdrawn asks, “Who will resurrect / What we could not feel / The first time?” Bearing witness to “The way this tear in the eye / Becomes commodity,” it begins to propose the structures of a sadness beyond the reach of commodity. To “The mind bludgeoned / By a force without grace,” it offers the specter of a world where the relationship between grace and force has been reversed.
—Ian Dreiblatt


How do we orient ourselves, or fail to orient ourselves, in a moving and ever-changing surround? What are the conditions that withdraw us from any grasp of the society in which we live? How to find a pathway that leads forward, and not back, or worse, around in circles? These questions gripped me physically last week, behind the wheel. And I find myself asking them once again today, while reading Thom Donovan’s book of poems, entitled Withdrawn—a book in which I am somehow encrypted, and which I perceive as a subjective refraction of the experience of an entire political generation, those who traversed the Occupy movement. Faced with the demand to respond to the book, I wonder about the “post-expectant” moment in which Thom’s feeling of self now seems to be situated.
—Brian Holmes


With cover art by Harris Johnson.

Support Compline by preordering Withdrawn and receive the book early at 20% off the cover price, plus free shipping!


Thanks for your support!
Michael Cross