Eternity then / Inseperable (Tears Are These Veils) 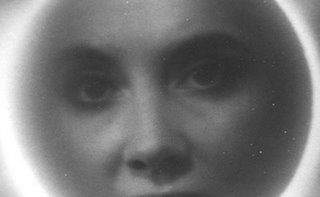 As stars superimposed
That face expresses
Nothing is lost there is not
Time enough for these tears.

Crying like machines
And animals crying out their eyes

Of night
The ritual

This night
Of the world

From the animal
Disgusting

From pools
Around the lenses

Is this making any sense?

The turbines swell again
a relation to mind.

Cries assemble
and blend around the face

a fashion of grace.
The portrait distorted

for there is nothing
time can't do.

of visions to mind

is ear to this occasional
swelling

Will we lie down
in that field

without sublation from which
we fall

to our senses recalling them

a dialogue of sorts
from which

around a single
spire a cathedral supreme.

The eyes, the eyes, the face
The face, grown inwardly,
Outward, for falling, our sympathy

As real stars, real images
Of stars fall, falling from her
Face, the eyes, the eyes of

The face, the growing inwardly
Until there is a voice for this,
Until there are two voices each

Each other's mine, the one
For the one, the one and
One somehow making one.

Eternity is then
Inseparable
From what it can do.

Histories of eternity
Like labor churns
Affected stars.
Posted by Thom Donovan at 12:32 PM No comments: 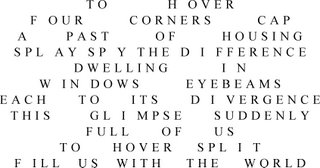 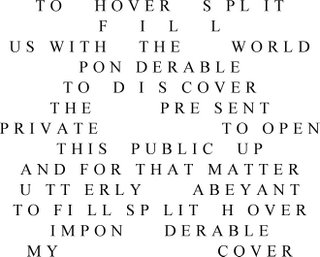 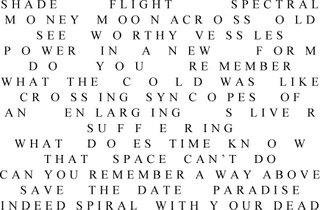 *forthcoming in Sarah Campbell's P-Queue.
Posted by Thom Donovan at 7:00 PM No comments:

"for whom pictures are paradise"

Children's books do not serve to introduce their readers directly into the world of objects, animals, and people, into so-called life. Rather, if anything remotely similar to Platonic anamnesis actually exists, it would take place in the lives of children, for whom pictures are paradise. By remembering, they learn; what you put into their hands should have, insofar as human hand can impart it to paper, the color of paradise, just as a butterfly's wings have their patina. Children learn in the memory of their first intuition. And they learn from bright colors, because the fantastic play of color is the home of memory without yearning, and it can be free of yearning because it is unalloyed. In that sense, the Platonic anamnesis is not quite the form of memory specific to children. For it is not without yearning and regret, and this tension with the messianic is the exclusive effect of genuine art, whose recipient learns not from memory alone but from the yearning that it satisfies too soon and therefore too slowly.
-Walter Benjamin
Posted by Thom Donovan at 11:30 PM No comments: 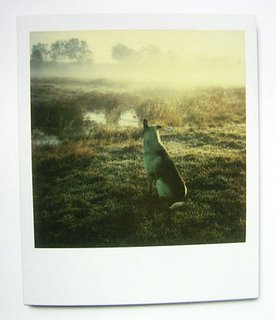 As if they were a moment
Ahead of the things we are
Waiting for an idea of
Our bodies so dispersed.

You have made an angel disappear
Through the most mundane
Means -- so what remains?

A mist, a kind of sheen,
As objects themselevs disappear.
A glass for the worlds we have been.
Posted by Thom Donovan at 7:41 PM No comments: 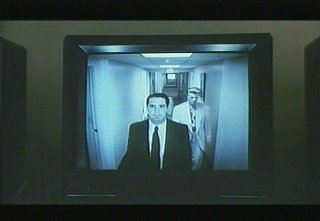 In an interview in 1992 by Michel Denisot on the French cable station Canal+ for the release of *Fire Walk With Me*, Lynch was asked about his taste for textures and materials, including things which are considered compulsive, like the series of dead flies he used in compositions. He answered that it is the name we give, the associated word ('dead flies'), which prevents our seeing them as beautiful, and that all we have to do to see differently is to erase the word.
--Michel Chion

I.
The erasure of names approaches paradise where a name once was and all that remains is the thing itself resonant and destroyed.

Paradisical beauty is this resonance -- silence beyond sound. The thing resounding no longer attached to a name.

III.
The signs of paradise remain not only in polesemy but in the dissociation of sign and signifier.

The mind itself cleaves the body as it says the word and a word as a body itself whether said or expressed -- fluent in telepathy.

A ceiling fan, a turbine in slowest motion.

Eternal as our sex-changing.

V.
The red in blood -- blood red.
The red that can't be destroyed and the red that can.
The word red -- hovering.
Bodies hovering in secret judgment.
A red room -- the blood in red.
That are both symbols and images and sound-images.
The image of blood resonant around a word.
The whirring of words like leaves and the leaves of leaves leave-taking in a single ear.
The rushing, like a rushing of liquid -- a falling of the image upon eyes.
A liquid sense of eyes -- ear conscious.
The reflection of a fan whirring for all time and no one fascinates.
Substantial is this.
Wired for a body made only of blood and useless cuts in time.
The heart of the heart of the motor in these incisions.
In becoming a word the word becomes not merely a word.
Paradise is the renunciation of this word having only its one sense.
The denial of the denial of the doubleness of words.

VII.
Words like literal hallucinations of a general voice.

VIII.
Literally words are tearing us apart.
They go down like gifts towards another who is not exactly us.
It is as though these voices were in the next room on a monitor and not here.
Voices rushing in like angels resounding around the fullness of any place, a portal in the ear.
I want them flung, the blood torn, but I literally can't.
How can't can become literal.

IX.
Connecting a sound to a sound movement resumes and we are here before it listening in.
This literal scene metaphorizing only a mood of blood.
Waiting for an image to connect image sound connects what image can not.
We rest in this failure like an eternal word.
An angel rushes upon us again missing the moment it would otherwise grasp.
Red and the word red, blood and the word blood.
Absent-mindedly reciting the world as if it could remain still.

X.
A towel, for instance covering, an angel.

The horizontality of afternoon light
as it falls on the wall.

Signs of a longing
for home follow us afterward.

Icons, like actual homes, alight in our
hovering.
Posted by Thom Donovan at 6:49 PM No comments:

Anything That Moved ('Immobile Growth')* 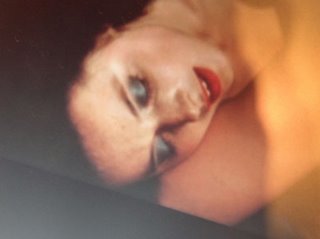 Not yet velvet
Not yet this light please
O please
Not yet please, please O
Unclasped this
Night not yet of wind
Unclasped around
A verb to fuck

If a light went out in the world
I would hear only
The lips the patient slap
Of flesh as spirit
A final chase of
Speed and chance
The revolving movements
Of two faces under
The dark light of a parked car.

*composed Spring 2005 to Zack Finch and Michael Cross, after lines from poems by Mike Kelleher and John Taggart and watching again David Lynch's *Blue Velvet*.
Posted by Thom Donovan at 11:45 AM 1 comment: