The following is a call C.J. Martin and I are making for work regarding John Taggart's poetics. The call is one part of the feature we recently curated together at Little Red Leaves vol. 4:

"When C.J. Martin and I originally put out a call for the works collected in this feature, we had intended not only to include poetry ‘after’ Taggart, but also to gather critical responses to Taggart’s body of work thus far. For a future print volume, Martin and I would like to publish works having to do with the critical reception of Taggart’s work. These works may proffer scholarship about Taggart’s various sources, which derive from visual art, literature, theology, philosophy, music, and natural history. They may also address Taggart’s work through approaches in art history, cultural studies, political economy, ethnomusicology, literary theory, comparative religion, and gender studies (in other words “across fields”). While Taggart’s project continues to be served by festschrifts, Martin and I believe it all the more important that more criticism and scholarship be generated about the work itself. Robert J. Bertholf has compiled a comprehensive bibliography of critical responses to Taggart’s work, which we include here in the interest of soliciting submissions for the projected print volume. Bertholf’s contribution is an excerpt from his full Taggart bibliography—to be featured in its entirety in that volume—which includes (among other things) an exhaustive (and fascinating) record of Taggart’s journal publications. To be in touch with us with submissions and inquiries please contact tadonovan [at] hotmail [dot] com and littleredleaves [at] gmail [dot] com."
Posted by Thom Donovan at 10:17 PM No comments:

writing about Eric Baus, Christian Bok, Grand Piano, Bhanu Kapil, and Gertrude Stein:
This is Your Brain on Poetry!
Posted by Thom Donovan at 10:54 AM No comments:

Here is a wonderfully informative article by Dorothea Lasky on object-based learning for 21st century art education.
Posted by Thom Donovan at 12:37 AM No comments:

Copp and Reines at SEGUE series

Ariana Reines is the author of The Cow and Coeur de Lion. Her first play, Telelphone, ran last February at the Cherry Lane Theatre.

Corina Copp is the author of the e-book Carpeted, and chapbooks Play Air and Sometimes Inspired by Marguerite. A staged reading of her performance text, “OK” was produced in 2008 by Theatreworks, and her play “A Week of Kindness” appeared in the 2007 Tiny Theater Festival. She is the editor of The Poetry Project Newsletter.
Posted by Thom Donovan at 11:21 AM No comments:

"We still do not know what a body can do." (Spinoza/Deleuze)

Arguing that theories of activism need to frame activism as essentially a theory of time, the presenters propose that the time of change not be defined chronologically but qualitatively. Rather than sequential time, they propose measureless time. But how can we think and experimentally work with qualitative time today? How do we take into account the ruptures, swerves, emergences, and folds of becoming that sweep us far beyond identity, being, and the logics of critique? What are the new possibilities and techniques of activism and activist art that develop out of these logics of the event? This is an evening to debate and develop new models of time, and in so doing to rethink and propose new ideas of artistic practice.

A presentation by Iain Kerr, artist, theorist and founding member of the research collective spurse, is followed by discussion with respondents Brian McGrath, architect, writer and Associate Professor of Urban Design at Parsons The New School for Design; Petia Morozov, architect, writer, educator and urban explorer; and Nato Thompson, writer and Chief Curator of Creative Time.

Presented as part of "Streaming Culture / Art and Politics," a new interdivisional initiative organized by Victoria Vesna, Visiting Professor (UCLA) and Director of Research, School of Art, Media and Technology, Parsons The New School of Design, in collaboration with the Vera List Center for Art and Politics at The New School, on occasion of its 2009/2010 program cycle on "Speculating on Change."
Posted by Thom Donovan at 11:02 AM No comments: 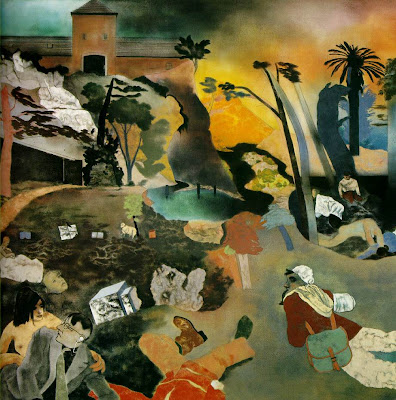 C.J. Martin and I coedited a feature for the new Little Red Leaves, a gallery of poets writing in relation to John Taggart. The feature also includes an introduction I wrote for the gallery, a new long poem by Taggart, "Kitaj Angels," and a selected bibliography of John Taggart criticism and scholarship compiled by Robert J. Bertholf. More details below!

Featured in this issue is a festschrift for John Taggart, edited by Thom Donovan and C.J. Martin, with poems from Theodore Enslin, Pam Rehm, Eléna Rivera, Joel Chace, Kevin Holden, Frank Sherlock, C.J. Martin, and Thom Donovan. Also in this section is a new long poem from John Taggart, "Kitaj Angels," as well as a selected bibliography of works by and about John Taggart, compiled by Robert J. Bertholf.