Sound blows the armor off
And love remains from fire
Or rather phonemics
Like they were making space up
As they went along phonemics
The place where the voice
Is playing me a prosody of disaster
The regret in this light
Too bright like bad faith
Discovers command—
Expropriated camp and blues,
A reappropriation you can feel, pours
This discovery over horns
And chicken scratch skronk
Of a voice circa 1979
Birth certificate of No Wave
Apotheosis of punk
Posted by Thom Donovan at 8:46 PM No comments:

The rap act that would turn out to have gotten the decade right was another regional product—Virginia Beach, Virginia’s The Clipse. Lauded and derided for their uncompromising “coke rap” approach, the duo’s lead single for their 2006 album Hell Hath No Fury was called “Mr. Me Too.” Whereas early Clipse videos (like “When the Last Time” and “Grindin’”) featured “local” spots like pizza parlors, bars, and projects, in the “Mr. Me Too” video the action is decidedly nowhere. Or, more precisely, it takes place in the sublimely blank world of capital circulation. The three major locations for the video are on the tarmac in front of a jet, in a blank white room, and, where else? Standing in front of $100 bills (see fig. 4). Like the Neptunes production that defines The Clipse sound, the video is vacant, full of empty spaces. The city is nowhere to be seen—the closest thing to it a stove sitting on the tarmac, a metonym for the cocaine that is itself just a metaphor for money. Elsewhere in the video women dance in front of different candy-colored screens like echoes of the iPod advertisements, circulating in the tumbler of image consumption in the age of digital music reproduction. In a different song on the album the chorus chants “Hello new world / here we come on our Twinkie Trains / with my man screaming ‘we’re on our way.’” Where we’re going isn’t the point, any more than where we’re from—what The Clipse understand, what is clear as day in the globalized present, is that the world is new, and movement is the only thing left resembling life.
Posted by Thom Donovan at 5:09 PM No comments:

Posted by Thom Donovan at 2:18 PM No comments: 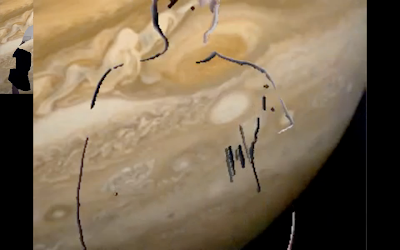 CAConrad made an episode of Jupiter88 with me this morning. Check it out, here!
Posted by Thom Donovan at 12:09 AM No comments:

An Archive of Eyes (@ Stretcher) 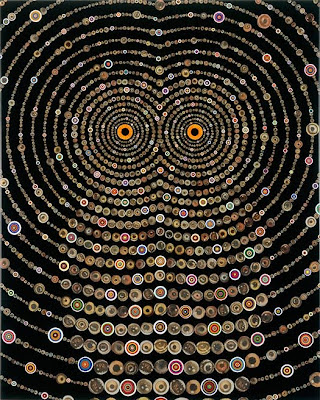 Here's a link to a little poem I wrote after Fred Tomaselli's paintings, at the invitation of Stretcher.org. Part of a larger feature of writers on artists called See/Saw.
Posted by Thom Donovan at 9:05 AM No comments: 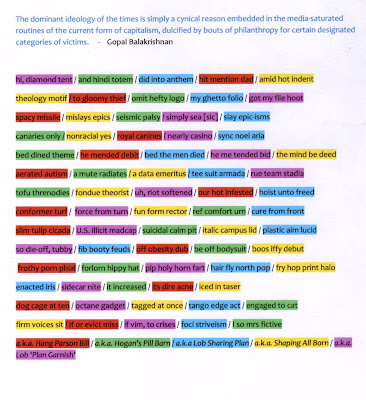 Check-out the latest Others Letters, featuring poems and correspondence by Steven Farmer and Nathan Johnson, who via an anagram generator called "Anagramania" mediate a current semiotic terrain of NeoCon fascism in the US, with warm and exuberant interludes about baseball, friendship, and much else.

"Two friends, recently reconnected after over ten years apart, begin an online correspondence: one in California (Farmer), the other (Johnson, a Seattle native) in Budapest, Hungary. Shared interests lead to an ad-hoc collaborative writing project involving constraint-based texts on the subjects of baseball, expatriate-ism, and the recent rise of the Tea Party in the US."
Posted by Thom Donovan at 2:01 PM No comments:

I want to be in a band,
A poetry band, this is for you
This wreckage Bruce and
Melissa, unlikely pair
Of you tonight

Materiality of sound,
We are shock effects,
Hypnosis heard through
Orange command, holes we were
Sucked through

On our way to being,
Into another future, I want
To get this armor off
But rhetoric sticks
To substance

Like a permanent
War of subjects, where it wasn’t
Clear who or what was subject,
Just that sense ignited
Some sense of us.
Posted by Thom Donovan at 12:38 PM No comments:

I want to be in a band, man
Like Rimbaud wanted to be in a band
Or more likely wanted to be like all this stuff
The barricades were filled up with
During the Paris Commune, or so I imagine
After Kristin Ross’s The Emergence of Social Space
Which my friend Dana turned me onto,
All that we are the lived duration of our sociality is like
Those barricades made in such a way
That all of these meanings—the meaning of
Our work and life—seem temporary, mutable and arbitrary, yet full.
I want to be in a band
I want to be full like those barricades are full
I want my life to have meaning—or measure?—
Like those barricades have meaning and measure
The whole world thinking about how it is being made
That would be a politics to strive to create.
The whole world represented by its being made, through its being made.
Gives up art to be a worker.
Gives up art to be an (art) worker.
Gives up politics for life.
Because life becomes politics.
I want to be in band, not just a group, definitely not just any public.
Because, as Fred Moten says, there has never been a public
That wasn’t denied to most of us, most people.
The public is what has been historically defined
By its exclusion of certain people and not others.
What would be a public
That didn’t exclude us and others?
A band then? A really big band?
Posted by Thom Donovan at 4:08 PM 2 comments:

But I want to be in a band, still
Some unresolved, unforeclosed sociality
(That singing is) (That being in a band is)
Going down like Rimbaud, say
To announce an end to which pronouns
To announce the organs unformed by work
That begin in our play—
To prove that these hands are made and unmade
By the music any one makes
Who is not just ‘me’ singing
Through the violence of that voice
Or a name we impose
On something when we feel
It is special, particular—like a band
Needs a name, like one feels they need to
Distribute this feeling for being in a band
Protean form of revolt, like a public
Not quite public yet, in an assembly of notes—
Like a ‘people’ forms a public—these notes.
Posted by Thom Donovan at 4:15 PM No comments: