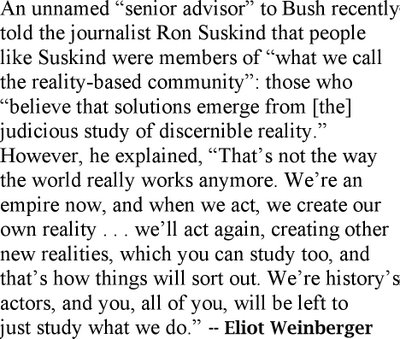 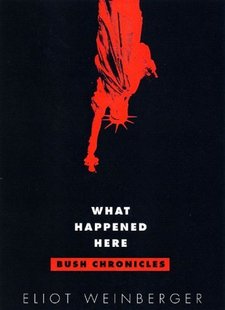 "Republicans do not like children. A little girl asked Richard Riordan, Secretary of Education for the State of California, if he knew that her name, Isis, meant 'Egyptian goddess.' 'It means stupid, dirty girl,' Riordan replies."

The above is taken from Eliot Weinberger's 2005 book *What Happened Here*, an essential chronicle of the W years. It is one striking example among many of the disturbing facts collected and arranged in the book. In *WHH* Weinberger sounds a political-ethical script after Charles Reznikoff's *Testimony* volumes and *Holocaust*, where hearsay and primary document reflect the antinomies of a hyperbolic (post-"Postmodern") political babble. If the hysterical pastiche of Flarf (or other individuals and groups currently taking up the problems of New York School and LANGUAGE communities) risks collusion with its contents--speech acts and cultural propositions riddled with hegemonic strategy--in an ostensible quest to call them into question, it may be interesting to counterpose the ironical effectiveness of a Rezi or Weinberger with those of a (Michael) Magee or (Kasey) Mohammad. The contradictions in the Bush admin are so rife, as Weinberger's "poem" proves, that one need only quote the administration's statements back, and arrange them with a kind of maximum torque of contradiction and rhetorical violence, to capitilize upon the cracks in the embedded U.S. political real (a terrifyingly banal surrealism surpassing Google's all-too-entertaining Boolean one). In Weinberger's book I sense the limit of what a poem can do during ever darkening times, if not a formal prescription to those who would write poetry to change the present face(s) of American politics: NOT APPROPRIATION, BUT FACTUAL ARRANGEMENT. *What Happened Here* is a necessary call to the direct action of collecting and collating Totalitarian facts and presenting them as poetic ones as the U.S. passes from a semblance of democracy to the blatent simulacra of Noble Lying.
Posted by Thom Donovan at 5:01 PM No comments: 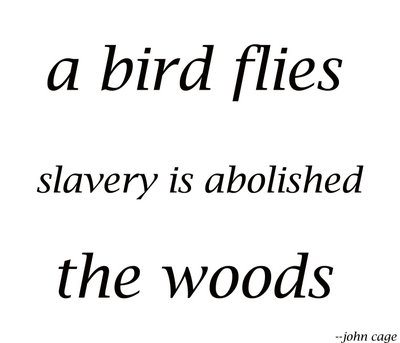 Posted by Thom Donovan at 2:18 PM No comments:

Pretending this isn't the end of the world 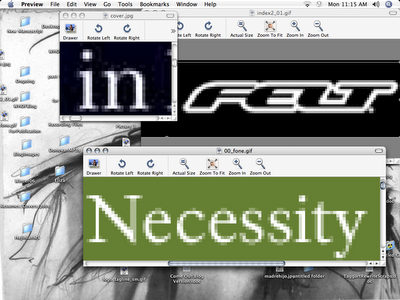 *with Eliza Newman-Saul
Posted by Thom Donovan at 1:11 PM No comments:

You Are Still The Universe* 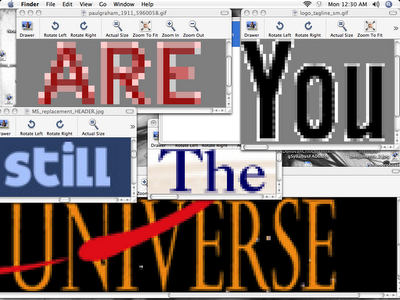 *image courtesy of Eliza Newman-Saul
Posted by Thom Donovan at 12:38 AM 1 comment: