NO RAINBOW STICKERS ON MACHINE GUNS

Read and sign CA Conrad's "Gays Against Gays in the Military" petition here:
http://www.petitiononline.com/queers49/petition.html
Posted by Thom Donovan at 1:37 PM No comments:

Carlos Soto just added me to his wonderful Elective Affinities blog, a project which intends a "map where affinities, differences, and unexpected connections coexist in an ongoing, collective construction." Posts consist of bio, poetics statement, poems, and tags of five contemporaries.
Posted by Thom Donovan at 12:12 PM 2 comments: 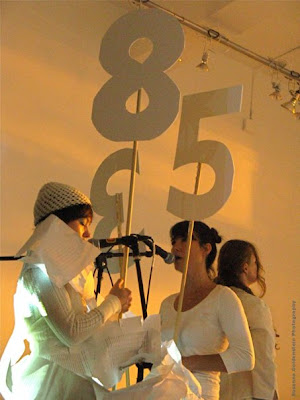 As we gather here, politics is failing us again. It is failing us, in particular, at the current Copenhagen summit on climate change. If there were ever a feeling of “now time” in our era it would seem to crystallize around these past two weeks. Reading the reports on Copenhagen, we are told repeatedly that we must act in decisive ways now to prevent a catastrophic rise in global temperature of 3 degrees Celcius. Politics is failing us because, as Naomi Klein says, the United States is “holding hostage” the rest of the world by attempting to broker a 'take it or leave'-style deal in terms of its willingness to provide aid. Such is our politics of the worst.

M. Mara Ann’s Containment Scenario: DisloInter MedTexId entCation is a book of hyper-appropriative poetry cum performance score written in emergency. It is an attempt to presence now time, to make now time felt through the urgency of words that defy normative-linear syntaxes to produce an emotive, political grammar of environmental crisis. Given the challenging legibilities of M. Mara Ann’s text—the fact that her book is as graphically complex as it is wildly abstract—I am very curious how she will read it aloud, and what it would mean for such a text to be read aloud. M. Mara Ann’s work requires that the reader learn not simply how to read the work, but how to relate its layers of understanding—its senses of becoming world.

Utterance is so important here because it sounds into the commons what is available as information to all—the Kyoto Protocol, the 1997 “Climate Change” summary, the Global Green USA & Green Cross International reports on “Confronting Climate Change”—yet which is withheld from our distracted attention spans, our reified lifestyles and senses of work. Partly incantatory, partly didactic, definitely a sincere shout into a void of citizens who will not have heard, Containment Scenario is ultimately consciousness raising. Mediating primary documents of the climate crisis, it wishes to refocus our attentions by underscoring key phrases from the aforementioned documents; yet it also wants to attune us to the ways that we could view becoming—a more global and heterogeneous eternal return of the same—beyond our outmoded and cynical views of economy, ecology, and justice.

Without thought—without thinking through what has brought us to this point of emergency—ecological problems will only persist whether or not we avert this particular crisis. M. Mara Ann wants us to hear this too—amidst the din of her insisting. That thinking as the ultimate emergency—thinking in motion, thinking in relation, thinking thinking—becomes more important than ever before. And that this thinking should be heard as much as it is seen and read. It should be felt, and this would be a kind of medicine for things in relation. What Parmenides originally imagined as becoming, and what M. Mara Ann reinvents for a politics of human-animal subsistence.
Posted by Thom Donovan at 12:27 PM No comments: