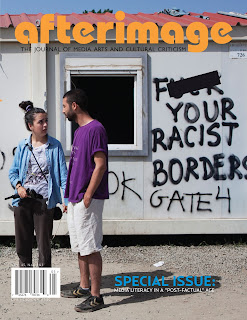 The new Afterimage double issue features an essay I wrote about Corina Kennedy's "Tender for All," an exhibit which appeared at PC4 gallery in Yonkers in the fall of 2016. The following is from the essay:

As Thomas Gokey remarks in conversation with [Chris] Kraus in the pamphlet Lost Properties, “Debt is such an immaterial thing, but I feel it in my body. I feel the stress of it, I feel the weight of it.” By laboriously scoring the language of debt—both in its Canadian and United States contexts, and in English and French, and English and Spanish respectively—Kennedy registers debt as an immaterial force weighing upon our consciences, organizing the subject through ressentiment—Frederick Nietzsche’s term for ways of remembering that prevent action, creativity, and conatus. Related to this effort is a sustained attempt to capture debt’s mood or tone. Encountering the language of debt writ large, albeit in hushed shouts, Kennedy reestablishes a distance necessary for experiencing certain uses of language as endemic to our emergence as subjects within the debt economy[.]

Posted by Thom Donovan at 3:06 PM No comments:

The following is from a review of Renee Gladman's Prose Architectures written for Hyperallergic:


Gladman imagines writing in English (would the experience be different in an iconographic or hieroglyphic language?) as a form of drawing, a sequence of lines. She recalls Gertrude Stein’s preoccupation with the “continuous present” of composition, and her frustration with repeatedly “beginning,” a quality she associated with the 19th Century Novel and which she attempted to transcend with her word portraits. Through the cube, a form that is both Platonic and ultra-Modern, Gladman begins to think about sentences and, eventually, paragraphs architecturally. “Were you building the present?”, she asks, closing this section of Calamities with the statement: “For a while, I hadn’t actually been writing but doing a transcription that fell in the deep space between drawing and landscape.” What links writing and drawing (in English) is their sequentiality — one word or line leads to another — as well as their essentially architectural character. Crossing over from writing to drawing, as Gladman does in Prose Architectures, therefore seems no crossing at all.

Posted by Thom Donovan at 10:19 AM No comments: