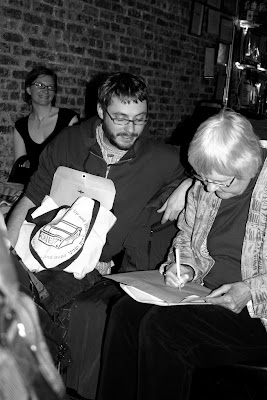 X Poetics, one of my favorite "critical and constant" blogs, has been collating some excellent material by Beverly Dahlen, and in tribute to her work.

Check out some of that material here: http://xpoetics.blogspot.com/2009/02/poetry-by-beverly-dahlen.html

and here: http://xpoetics.blogspot.com/2009/02/tributes-to-beverly-dahlen.html
Posted by Thom Donovan at 8:46 PM No comments:

"Into the Open" at Parsons

EXHIBITION
"Into the Open — Positioning Practice"

16 American architects-activists go beyond building to define a new form of social architecture. Join us to celebrate the U.S. Pavilion at the Venice Biennale at Parsons The New School for Design.

“Into the Open -- Positioning Practice” is presented by Parsons The New School for Design, in collaboration with Slought Foundation and PARC Foundation, with media partner The Architect’s Newspaper. Generous support for the project has been received from the Bureau of Educational and Cultural Affairs, U.S. Department of State, Washington, D.C., in cooperation with the Peggy Guggenheim Collection, Venice 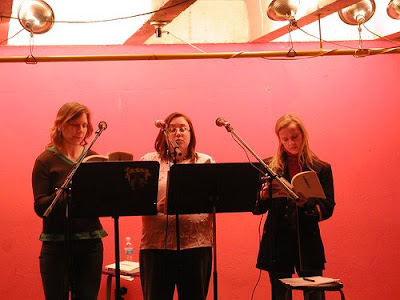 ADAM GOLASKI has some new work in Little Red Leaves, Torpedo, The Lifted Brow, and an anthology of horror stories called Exotic Gothic II. His story "They Look Like Little Girls" won the Supernatural Tales readers' poll--$35! Some of his translation of Sir Gawain & the Green Knight-called "Green"--will be reprinted in the next Drunken Boat "Mistranslation" feature. He edits Flim Forum Press books with Matthew Klane. Adam's review of There Are Birds, by John Taggart, appeared in the January issue of Open Letters Monthly, and has been receiving some very nice attention. His daughter Elizabeth can recite most of the alphabet, loves the letter "W," and is learning how to jump.

JENNIFER KARMIN curates the Red Rover Series and is a founding member of the public art group Anti Gravity Surprise. Her multidisciplinary projects have been presented nationally at festivals, artist-run spaces, community centers, and on city streets. She teaches creative writing to immigrants at Truman College and works as a Poet-in-Residence for the Chicago Public Schools. Recent poems are published in Cannot Exist, MoonLit, Otoliths, and the anthologies Come Together: Imagine Peace (Bottom Dog Press), Not A Muse (Haven Books), and The City Visible: Chicago Poetry for the New Century (Cracked Slab Books).

MATTHEW KLANE is co-editor/founder of Flim Forum Press, publisher of the anthologies Oh One Arrow (2007) and A Sing Economy (2008). His book is B_____ Meditations from Stockport Flats Press (2008). His latest chapbooks include Friend Delighting the Eloquent, Sorrow Songs, and The- Associated Press. Also see: The Meister-Reich Experiments, a sprawling hypertext, online at http://www.housepress.org. He currently lives and writes in Albany, NY.

FLIM FORUM PRESS provides space to emerging poets working in a variety of experimental modes. Flim Forum volumes include two anthologies Oh One Arrow and A Sing Economy, and just out, The Alps by Brandon Shimoda. for more info:
http://flimforum.blogspot.com and http://flimforum.com

PEACE EVENTS is committed to presenting emergent work across disciplinary boundaries and against categorization. For past listings and documentation check the right-hand column of Wild Horses Of Fire weblog: whof.blogspot.com.
Posted by Thom Donovan at 11:08 AM No comments:

Deafens plenitudes occupies our ears
Like some world the other dreamt
Surpassing the body before it was I.
Posted by Thom Donovan at 11:50 AM No comments:

To Patrick Durgin: on Disability Theory

The following is a version of a letter I wrote to Patrick Durgin this past fall after his reading at St. Mark's Church:

One of the first sources to get me thinking about disability (the term at least) in some of the ways I still find it useful to think about it is Martin Heidegger’s philosophy. In my copy of Being and Time the translator uses the term "dis-ability" to indicate a situation of anti- or non-instrumentality. This non-instrumentality is central to Heidegger's philosophy inasmuch as to “dis-able,” that is, for technology (or the "self" as a technology) to break down or become inoperable, demands one think again what one does: what they are (Being), but also how what they are is mediated technologically and/or socially (however I realize Heidegger wld never deign use a word like "social").

Reading very little of the actual theoretical literature that has emerged through disability studies, I wonder if the term "technology" here could not be replaced with the term "built environment"—the disability theorist's sense of the environment as something socially conditioned, and therefore naturalizing. To be anti-“ablist” or pro “disablist” would then be to want to orient (or not orient) one's world through the non-instrumental—through a sense that all are better off (in a variety of senses: ethical, legal, political… for instance) when everyone has to continually rethink (their) embodiment in relation to environment.

In this way (and this is why I think movement research/dance, design, and architecture in particular should have an enormous stake in disability culture's/theory's future) a disablist orientation also becomes the primary orientation for thinking. To think proceeds from a defamiliarization or interruption of habitual embodiments, and therefore of the ways ideology extends from embodiment, and vice versa.

As Robert Kocik has noted of the Nonsite Collective’s emergent curriculum about disability, Nonsite's wager tends to be an aesthetic one. Something that has interested me in your critical offerings at the Nonsite Collective’s website, and your focus on my talk, as well as Joyelle McSweeney and Johannes Göransson's "Manifesto for the Disabled Text," is how metaphors do not do enough to think through how a discussion of disability based on the experience of the disabled could engage, and be complicated by, aesthetics.

Having now read Tobin Sieber's book Disability Theory, I realize that I have a number of stakes in disability culture/theory which extend beyond the metaphors I may have offered in my talk “Allegories of Disablement” this past summer, and which Joyelle and Johannes offer in their “manifesto”.

First of all, I think disability culture/theory/aesthetics could radicalize a discourse that has been ongoing for a long time now, but recently (only in the last twenty years) has become a “hot topic” for theoretical discussion. This is the one that's been established by the Slovenians (Zizek et al), Alain Badiou, Jacques Ranciere, Judith Butler and others concerning the place of the subaltern within politics, and the question of what constitutes the subject as an "event" (Badiou's term).

One of the crucial things that interests me in regards to Tobin's book is the way it singles out disability as a metadiscourse of subalternality. The disabled, in his account, are the oppressed of the oppressed insofar as images of the disabled (and ways disability is metaphorized) figure against every oppressed group historically. In this sense, underlying disability theory is a new messianic discourse, or (in secular terms) discourse of liberation. At the core of any particular identity politics is already a metadiscourse of cooperative struggle, and of the ways that hegemony functions. Among struggles that (unfortunately) don't cease to be ongoing and therefore matter (Feminism, Black power, post-colonialism, etc.) disability injects a whole new set of challenges and reluctances on behalf of the dominant power structures, as well as existing liberation struggles.

Though I come away with many things from Tobin's book, the other major thing that the book made me think about are the limits of embodiment itself (and this seems an understatement as I write it). Before I left SUNY-Buffalo most of my research was actually veering towards a discourse about affect and embodiment. Some of the books
I liked most in this discourse were Charles Altieri's The Particulars of Rapture, and the work of theorists such as Judith Butler, Elizabeth Grosz, Alphonso Lingis and others. That a lot of attention has swerved back to both (post) New York School genealogies in poetry, and the New Narrative movement of San Francisco and elsewhere convinces me that affect and embodiment are "of the hour" (as if they were not always of the hour for people whose bodies are threatened and challenged on a daily basis) insofar as our world is longing for new affective models, cultures and commons.

In fact, recently I read a transcription of some dinner conversations between artists in 2005, where someone was speaking of the need for new "affective cultures" (you can find this exchange in Creative Time's book Who Cares). I think disability culture, at the risk of overly aggrandizing or cathecting it, poses a limit discourse of affective culture/embodiment studies.

When I spoke in San Francisco last summer at Rob Halpern's and Lee Azus' house, the poet Amber DiPietra was in the audience. While DiPietra and I didn't get to talk all that much during the evening, she had many insightful things to say during the conversation and Q&A following the talk. What she said, in particular, that has stuck with me, if not become somewhat of a refrain for me as I think about disability and poetics, was her phrase "my body is the problem". The context for this comment was a discussion about Bhanu Kapil’s teaching, wherein Amber stated that what she took-away from Bhanu’s practice was a commitment to proceeding through problems rather than formal investigations.

I am struck by DiPietra's statement, her proposition if you will, as a heroic moment of an emergent discourse about disability and aesthetics. Partly because it was said so resolutely—from a position of conviction and experience. But also because it expresses exactly what I think about any body (whether legally disabled or not) that would claim disability: that it demands to occupy a position where every body is thrown into question in all senses of "question" (legal, ontic, aesthetic, practical, ethical...). Is the body in fact "the case of everything existing" (Wittgenstein)? DiPietra's statement also gives a new force to Spinoza's proposition (another refrain for my thinking): "we have not yet determined what a body can do". It is only in relating how ability and disablilty are constituted that we have any real knowledge of what doing or a problem, for that matter, are.

If I could come back to just one connection before concluding here it would be wanting to connect this sense of the disabled body as "the problem" to the messianic kernel of disability theory. Which is that the disabled body, interpellated as such (and I do think the term interpellation is most fitting here, especially when it comes to the problems of “visibility” you identify in your work; or "drag"—who "passes" or is noticed/identified as being disabled), become the very limit case of the social itself, and of the socius/public sphere as it is constructed ideologically and practically. So that, when DiPietra says that her body is "the problem"--a proposition that she means as an aesthetic one, which is to say: my body creates the very problems that art is to evidence, if not resolve--one must take this as a political-ethical statement too. Here the particular, the most particular bodies our society chooses to acknowledge, presences what is missing from the universal, or serves as the universal's structural counterpart. For every "I" to identify as "disabled" then, is to want to be one subject, or assume a universal subject through what would perennially be conceived as the least valuable social member/subject position.
Posted by Thom Donovan at 11:22 AM 4 comments: