The new Big Bridge includes features on Slow Poetry (ed. Dale Smith) and George Oppen (ed. Eric Hoffman), the latter of which includes a review I wrote of Oppen's Selected Prose, Daybooks, and Papers in the winter/spring of 2008.

"Last summer when I began writing about Slow Poetry, I wondered if poetry that dramatized the dark and stupid could matter much longer. So I began framing raw questions that might help myself and others respond meaningfully to these dark and stupid times. I wondered how I could make sense of what's happening around us through poetry, through art? Perhaps Slow Poetry could be a way to help orient attention again in art to the world. I liked the term, too—Slow Poetry—because it associates with Slow Food and that now-global movement's linking of pleasure for food with a commitment to community and the environment. If we can enjoy poetry—itself an essential form of nourishment—why not also take into account the contexts of its making and reception?"
--Dale Smith

"...I asked contributors to provide essays approaching particular Oppen poems, focusing primarily upon Oppen's aesthetics and prosody, together with critical reactions to recent Oppen scholarship (in particular Cope (2007), Heller and Nicholls (both 2008)). This was only the most general of requests as I wanted as little restriction as possible discussion of the work. As Oppen himself wrote, he could not bring himself to write poetic "exercises," nor did not want my contributors to be forced to contribute critical ones. It was therefore with great pleasure when I received these essays, which I believe represent a significant move forward in Oppen scholarship, marking both the distance Oppen scholarship has come since the work of Cuddihy and Hatlen at the same time pointing the way forward for the Oppen scholarship to come."
--Eric Hoffman
Posted by Thom Donovan at 2:52 PM No comments:

check it out! I love the poems Conrad has selected for a new Weiners EPC author page, like this timely one:

Without personal burden
only refuge denied
such taking allowed
as federal government
Posted by Thom Donovan at 10:23 AM No comments:

I am extremely skeptical of the rise of "green" capitalism, yet this organization seems a necessity for responsible consumption given our current global economy:
http://www.climatecounts.org/about.php

"The limitation is us" 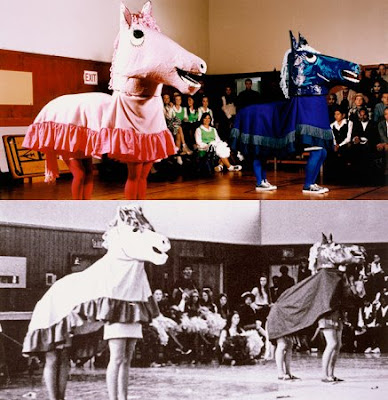 Rereading Mike Kelley's book Foul Perfection, I came across this passage, which seems a wonderful parsing of two discrete definitions of the sublime and the sublime's relationship to objectivity. The passage is quoted from an interview Kelley conducted with Thomas McEvilley in December, 1992:

"Thomas McEvilley: Along with formlessness, the theme of the sublime in recent art involved a sense of the human individual possessing in a hidden way a potential for vast spiritual greatness. [Barnett] Newman is again the obvious example. But clearly you approach it differently.

Mike Kelley: Right. I have a big problem with that reading of the sublime. My reading is more Freudian, involved with notions of sublimation. I see the sublime coming from the natural limitation of our knowledge; when we are confronted with something that's beyond our limits of acceptability, or that threatens to reveal some repressed thing, then we have this feeling of the uncanny. So it's not about getting in touch with something greater than ourselves. It's about getting in touch with something we know but cannot accept--something outside the boundaries of what we're willing to accept about ourselves.

TM: You're not concerning yourself with what's on the other side of that limitation.

MK: The limitation is us. I'm not interested in what's not us. But to keep talking about it in relation to the threat of physical annihilation separates the project too much from aesthetic discourse. And I want that also to be a part of it. It's about one's interaction with an object, not just one's interaction with one's self. The focus is on the object."
Posted by Thom Donovan at 7:49 PM

Stephen Burt's eccentric genealogical construction of contemporary potery after Objectivism, "The New Thing," seems yet more evidence that the Objectivist nexus is not one, but many. And all the more reason poets themselves should take responsibility for making the work of their peers legible to each other, and help to reveal its place within larger historical continuums and trends (a work too often reserved for professional critics).

Having grown up among intense communities of poets and artists (as well as critics!), and having studied Objectivism as a graduate student, I am struck by how distant Burt seems from my own senses of an Objectivist continuum in present-day poetries (however much I enjoy reading many of the poets whom Burt mentions).

Citing Burt's statement, "For [C.D.] Wright, as for [Juliana] Spahr and [Mark] Nowak, poetic attention to facts and things—emulated, reclaimed, quoted, re-framed—speaks to the material conditions a left-wing politics works to change. For other makers of the New Thing though, the solidity they seek is not so much economic as phenomenological: the poem finds, and emulates, some permanence—it is, and describes, something with weight and “measure,” small enough to hold in the hand" I wonder: must the political-economic and the phenomenological be partitioned? Many of the most rigorous poets I know today work through political definitions of the phenomenological and vice versa.

The emergence of political subjects through the incommensurably singular presents a contemporary definition of Objectivism to which I am beholden. Looking back at Oppen and Zukofsky in particular, I believe much of their work allegorizes the emergence of the subject as it struggles to act as a political being via a phenomenology which foregrounds textuality as an extension of various forms of social mediation (the fact that writing has an objective existence and this existence mediates a reader's reality). Oppen's engagements with Heidegger's "arduous path of appearance" comes to mind most readily here; but so do the uncanny convergences of his poetics with Hannah Arendt's thought, for whom the political was also fraught with ambivalence and difficulty. "Left-wing" content, or any content for that matter considered properly subaltern, does not separate itself from matters of form (because it simply can't). Rather, through the subaltern--or that which is made illegible, invisible, or impossible by its situation within the social--form and content constitute an inseparable unity because they coappear within a single event.

"Which example applies to you?
Right now your profile may be confusing. Please choose how we should refer to you.

Please select either Male or Female
Thom edited her profile.
Thom edited his profile."
Posted by Thom Donovan at 3:15 PM

Here's some welcome press for ON1, compliments of the University of Arizona Poetry Center's July newsletter .

"ON: Contemporary Practice is a forum for writers to exchange ideas about their contemporaries: writing that takes place now. In their preface to the inaugural issue, Cross, Donovan, and Schlesinger describe a collection that is “not edited, per se, but the accretion of response to the emergency of the present.” These are potent words, and the essays and conversations in ON do feel high-stakes, nervy, and engaged. Tenney Nathanson on Beverly Dahlen, Dale Smith on Hoa Nguyen, Jonathan Skinner on Julie Patton, Tim Peterson on kari edwards, and Jen Hofer and Sawako Nakayasu on each other are just a few of the pairings. Collaboration vibrates through the pages like electricity, and it takes the form of analyses and enactments. ON is great conversation and great theory, protean and visceral."

Copies of ON1 may be purchased at LULU.

ON2 is on the way with contributions by Corina Copp (on Rodrigo Toscano & Poet's Theater), Robert Dewhurst (on Dorothea Lasky), Robert Kocik (on Stacy Syzmaszek), C. J. Martin (on Rob Halpern), Evelyn Reilly (on Rosmarie Waldrop and contemporary women's writing), and Tyrone Williams (on Erica Hunt) among many others.
Posted by Thom Donovan at 1:59 PM