“They want to pile up as many civilian dead as they can. […] They use telegenically dead Palestinians for their cause. They want the more dead, the better.”
--Benjamin Netanyahu

Who shot ya? It's just like ashing,
So ashy it’s like the ash of this song
What thinking does a universalism
Becomes singular, all tragic with its hands

Up, suffering this long exhale, living on
In which phrasing won’t it be enough
To keep living the way we have
Telegenically dead but still dead

Or like ash undead, and song-like ash,
Like thinking does, come shadow come
Until we are in it, the street suddenly open
Put your middle fingers up, suffer this,

Kills you, fucks you up, when the cop
Is not a cop, is in fact a soldier,
A fascist, when revolution is not a luxury
“the luxury of my disbelief”

The students demonstrate the
Presupposition of their interpellation
That "You're always already in the picture,
it's always you, already"

And LeVar Burton offers advice about how to act
While a wounded preacher shows us
Her wounds, the wounds of Mike Brown
And Eric Garner, and Trayvon Martin

Thomas the Train rolls by, fucking with
The open, the truce among the
Gangs and who is really looting Ferguson
Ferguson, Israel; Gaza, USA

Homologies of power and Puff’s reenactment
Twenty years later, uncanny like the third
World has always been (with) us, always
Coconstitutive, reflected like those triangles

In Rick Ross’s aviators, tragedy and then
Farce, symbolic death and then the real death,
The real and its simulation, how we never
Were post-modern, the new old slavery:

“Where the thugs at?”
“Where the street tribes when we need y’all?”
“Who was present at the burned down QuikTrip”

“When you’re suddenly in the middle
of an inhuman situation that’s repeated
itself over and over and over for 400
years, you have to act fast.”

“looking the part doesn’t help you brother […]
You create your own fictions.
To survive, to live. I understand.”

“The police, black and brown bodies, war.
Can they ever be thought apart from one another?”

Why There’s A No-Fly Zone Over Ferguson, Missouri?
Why #IfTheyGunnedMeDown? #iftheygunnedmedownedburnitalldown
What picture would they use? WhiletheFedsWatch

“Turn the other cheek
now means
here are our collective asses to kiss.”

“Suddenly I found no new words.”

Posted by Thom Donovan at 7:02 AM No comments: 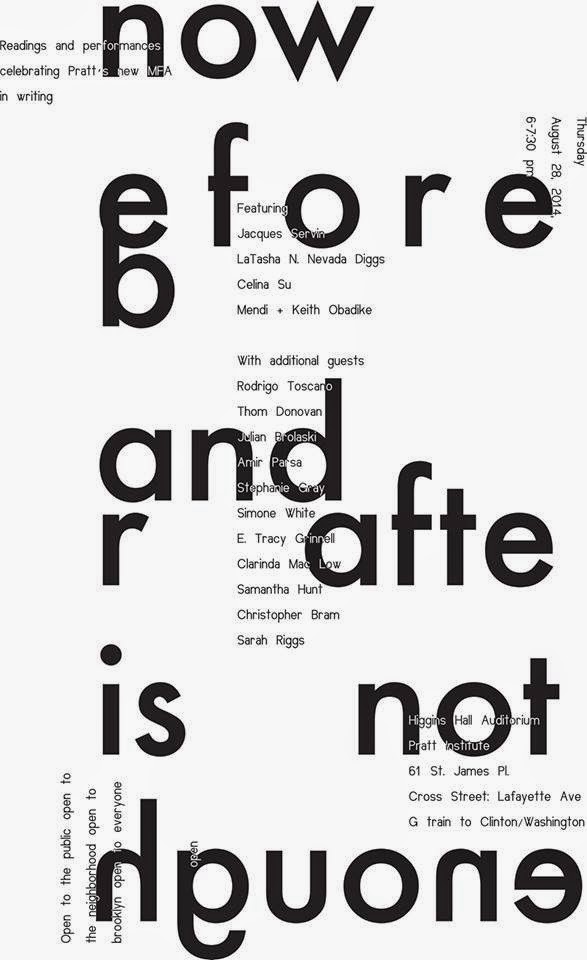 https://www.facebook.com/prattwritingmfa
Posted by Thom Donovan at 9:01 AM No comments:

What does the masochist have to teach us—about subjectivity, and capitalism, and feminism, and the possibility of a post-sovereign existence? Using online classifieds ads, and chatrooms, and email as her theater, Cassandra Troyan interrogates the dynamics of power (and sex as an extension of power) that structure our world. Where to maintain a self, to fortify one’s ego, is actually where the problem lies ('I can’t wait to get away from myself'). And where the constraint and humiliation of the masochist produces the promise of a world beyond the control society where bondage equates grace, and weight elicits happiness charged with a difference ('Voluminous happiness is never light / if it’s lifted it isn’t true'). Alternating between strategic reappropriation and a brutal lyricism, Kill Manual assumes a persona total in its world-destroying and creating powers. Relations of intimacy and commons emerge from (to use a phrase of Leo Bersani’s) 'the prospect of the breakdown of the human itself in sexual intensities.' Where, during an endgame of austerity plans and plans to expropriate every last resource remaining to human survival, the last thing they can take from us would appear the possibility of giving everything away.
Posted by Thom Donovan at 1:04 PM No comments: