Knowing Not Knowing (Alone With the Alone)* 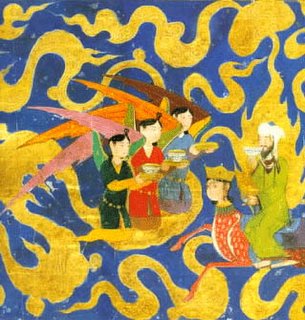 The ‘interlocuted Same’ is a voice of ‘inner discourse’ (consider Lacan on Judge Schreber) of which we all perhaps partake, a voice interlocuting, circulating or circuiting in Generality. …Or the voice of God talking to Itself (Toufic); the ‘middle’ or ‘neutral’ voice of literary ontology (Blanchot).

Re: your “caring” or “uncaring” in an event of exchange or “communication” between “people”… I’m not sure that what I wish to address through our project is communication per se – whether something is “boring” or “of interest,” “private” / “solipsistic” or “inclusive” / invitational / dialogic. I want to attain the moments everyone should / does care about because it concerns no one in particular – a deepest interior shared in exteriority, a non-numerical thirdness of all entities / “parties”.

It is a genuine withdrawal beyond “performance” -- not experienced because experienced by no one -- that is a call to listen or to silence rendering interest / boredom out-of-the-question (expression or silence as “pure” interest: interest that stays interest?).

So perhaps it shouldn’t matter whether our video has a soundtrack or not: soundtrack should be silent, should evoke a silence, and that silence should be expressive / interesting in this sense and not merely non-invasive (avoiding interference with image-track). It is this silence that is not contingent on “actual” sounds.

Yet all this seems something different from my original proposition and your response. The thing I want to return to is “knowing,” compensations for “knowing” and “not knowing” (should we not also have to compensate for knowing if we should have to for not?).

As a precedent for our collaboration, what comes most readily to mind are David Antin’s transitional works between ‘meditation’ and ‘talk’ in which he and his wife proceed by a series of tape recorded ‘exercises’ by which they defer a unity of narrative intention and conclusive interpretation through conversation (and all that conversation entails in terms of interruption, distraction and circular modes of attending).

Only we may start less determinately and without so much “ironic flair”. To experiment with the consequences of beginning somewhere (anywhere?) in a series of texts, and to relate these texts interpretively to produce knowledge (however elliptical or circular) about them. In compensation for not knowing them we may perhaps come to know something else. A know how of ourselves, of poetics, of thinking itself opening beyond both the drudgery of textual authorities and the interiorities of private fancies and fantasies not nearly interior enough (not so interior that they produce an exteriority in which the different becomes equatable, if not Univocal). An ethics of commons.

*composed Jan '06 to Eliza Newman-Saul towards a series of collaboratve video performances w/ the artist. "Knowing Not Knowing" is a follow up to the post on this blog, "Compensations for not Knowing".
Posted by Thom Donovan at 12:28 PM No comments: 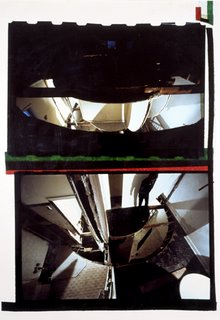 A time to come

See and saw see and see


Texture without beginning i.e. the there of a plan jigsaw a plan to begin again in this frame to produce an outside moving within

No longer are there windows to simply see out of

Must being have an above or below

Moving to see the simultaneous saw too much


For time once out of this frame 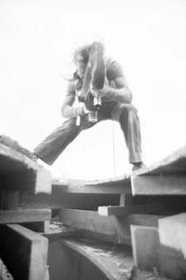 *composed Winter '05. An offline version of "Matter Ark" and an accompanying essay on Gordon Matta-Clark will appear in the forthcoming issue of Sarah Campbell's journal, P-Que.
Posted by Thom Donovan at 1:22 PM 2 comments: 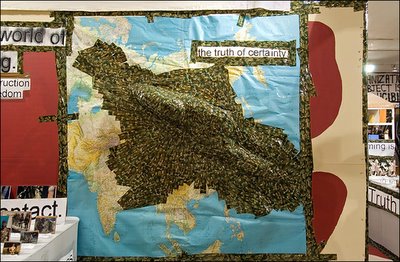 3.
Or the particular / the particularization / of conflicts / in their generality / specificity or uniqueness / of bodies lost or mutilated / defaced beyond recognition / or twisted / disappeared (in total appearance) / dehumanized by a Western / specificity to lose specificity / in violent diffusions (a “mass / media” imaginary) / lacking what we always have of course / this violence / and the ambivalent / an all-important ambivalence / of artworks may be the only / means to show the mess we are in / clearly / the noise that should yet effect clarity.

This violence / the occupation of Iraq / and of “the world” by the United States / or last gasps of empire / the general “human war” / engagements like contracts / are often violent / “en-“ a prefix of war? / to engage or put into relation / albeit violent / it turns the stomach / (it twists) / the face turns / (it untwists) / to hear / to turn to God in the human / animal / one must listen to see / accretion / the conflicted / messages of someone / existing in it (our “mass media” / imaginary) / if to see is to have at a distance.

If I use / the prose / or conflicted forms / of / a constructivist / it is because / I am the unassimilating yet / in-formed mirror / of Thomas Hirschhorn / whose newest “public monument” / or "installation" / at Barbara Gladstone / gallery in Chelsea / presents a new challenge / to an ever growing / resurgence of "meditational"-"fantastic"-"psychadelic"-"imaginative"-"hallucinagetic" works currently fashionable.

For a few years now / I have imagined making / a longer / poem / using Paul / Sharits’s film / *Piece Mandala End War* / as a formal analogy / this longish poem / as I have conceived of it so far / would have / for its number of words (and/or lines) / the same number / of frames / from Sharits’s film / (something like 1,275) / only instead of individual colored frames / the poem would employ / words for their tonal values / certain words / replacing / the pictorial content of the couple / from the film / engaged in sexual intercourse.

These later words / I had always imagined / as having a “violent” / “shocking” / or sublimating effect / interdispersed / among the tonal words / an effect / that would cut / utterly against / the meditational inwardness / of the tonal words in pseudo-numerical arrangement / and / however simplistic / I have long-thought of this / unfinished project / as one possible solution / to the problem of effectively conveying / radical social-political contents / through forms which may be said / to be ethical / insofar as they instance / divine verticality / and spiritual inwardness.

It would be / I have always hoped / an ambivalent negotiation / of spiritual necessity and socio-political exigency / agit. prop. didacticism / and ecstatic mystical practice.

What reminded me of this / abandoned (or hopefully deferred) / project this past weekend / were Hirschhorn’s juxtapositions of photo print-outs/ of mutilated corpses / (low res. however / graphic / to the point of being revolting / making this / viewer at least / turn away) / with a variety of geometric / color pencil drawings/ and kinetic paintings (also low res. photo print outs).

Hirshhorn’s juxtaposition / of drawings by / Swiss Theosophist / & artist Emma Kunz / and images from the synaesthetic instruments of / Richard Land with images / from the ongoing American- / Imperial “engagement” / in Iraq / and ubiquitous and stealthy / “war on terrorism” / dramatizes a central ambivalence about / artistic response to / geopolitical violence / where currently the “art / world” turns inwardly / towards a spiritualist imagination and an imagination of / popular media / counter to the materialist urgencies / of more direct critique / and intervention.

So perhaps / what we must value / in Hishchorn is / his ability to show this ambivalence / thru / the determined / messy-ness of his installations / where conflict / reigns over resolution / and where messages (headlines in / this case / like “immaterial witness”) contend for the viewer’s attention / among a host of other / cathective points / mannequins with / screws driven into them / CD’s with jewel case covers made by kid's “spiral art” kits / large pine coffins / covered by ironic messages / of mourning and / “cheesey” de-cals.

As if all of the current art trends / "art data" if you will / were swept / into Hirschhorn’s angelic storm of installation-work/ and put face-to-face / the very urgent / and yet incomprehensible or unpresentably / present data of war / an "engagement" the artist might like/ to particularize / to make "specific" / but which becomes obfuscated / by an unmitigating rhetoric of headlines / and the repetition of violent facts.

Walking Chelsea this past / weekend / among so much art / lacking both necessity / and rigor / I could think of no work more necessary / for our current moment / in its mode of presentation / a mode as indeterminate as it is urgent / as monumental / as it is ephemeral / as noisy as it is clarifying / in its ambivalences.
Posted by Thom Donovan at 8:17 PM No comments:

1.
If installation was environment
And environment public monument
And monument non-
monumental
And the non-monumental
the nearest
Approximation to the realities
of culture
Subsumed by superstructures and the horizontally
Striated the gallery
walls wouldn’t appear
To build themselves white and formed
eternally Out of air
we would tend to be heir to These histories
of malice
and violence incalculable.

As human nature is
to the animal, the Mind (human
mind
or immanently
creative force) within
nature
is to culture, culture
which can only eventually surpass
what it is to be human
animal and animal.

The shape of this war – this particular – war and these particular images – of corpses images – of the dead no one – can show them all – no one cover – the unique particulars – no one can show – the unmutilated – universal yet we must to rest – to act within this war – to partake of human nature as culture – inaesthethic presentables
Posted by Thom Donovan at 2:40 PM No comments:

Locus of power but reversed

The name we share a dispersion
to what effect.

Owe or words shower else


Registration drive this most simple
division

the motor of the heart of the motor

Duration that began her life-work.

To presence what is happening each book.

The not so voluptuous silence and the blank voluptuous – both imaginary.

Make evident the shape of interest formal appearing when there is an active famine or whether.