Here we are forgetful
An archive, your archive, is specific not general
Because it is made of flesh and blood

A swarm it takes to the streets and
Like events is not foreclosed
The composite of a few specific questions,

Of research, it tries to keep a promise
When the dead can’t
The person/people who organize it

It’s excluded or lost—to the collective struggle
To remember, the threat of disappearance
This struggle represents.
Posted by Thom Donovan at 1:39 PM No comments: 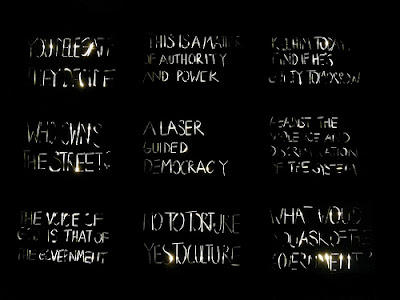 One of the biggest mistakes we often make is to believe in the monolithic category “ART IS,” which I believe is at the root of the debate (and skepticism) about the political efficacy of art. I don’t think art “IS” one thing in particular. It shouldn’t be thought in the singular, but rather embraced in the plural: Art(s), rather, are, whether objective and social, symbolic and didactic, pedagogical and entertaining, etc. I don’t mean to relativize or to dichotomize these categories, but to insist that a plural frame of mind produces a positive, inclusive, and liberatory rhetoric that resists the dominant and reductive forces of the art market and art history which have through the forces of authoritarianism, paternalism, and capitalism staked their claims over art.
Posted by Thom Donovan at 2:32 PM No comments: