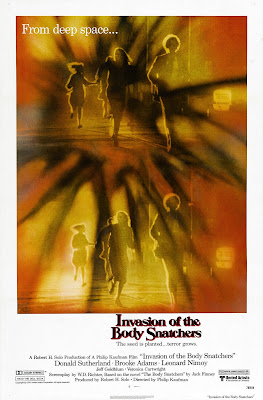 Thinking, Leslie, of your favorite movie—Invasion of the Body Snatchers. I have often revisited this film, Philip Kaufman’s remake of Don Siegel’s original, wondering why it was your favorite movie. The film begins with these gauzy, cotton objects drifting in outer space (the pods!). They are making their way to planet Earth—San Francisco to be specific. There they will undertake their ‘invasion’ by releasing a substance into the atmosphere. A substance humans/citizens will take into their lungs while they sleep, mind-altering like a psychotropic drug redolent with late-60s utopian longing. This film, released in ’78, looks forward and backwards. Backwards at the socio-political struggles of the 70s, of which I consider you a part—and the environmental movement in particular (in the film the would-be protagonists, Donald Sutherland and Brook Adams, work for the EPA). Forwards to a particularly dystopian decade, the decade in which I grew-up replete with Reaganomics, late-Cold War imperialism, culture war, and the replacement of erstwhile public servants and citizens with ‘pod people’—people seemingly soulless; an exaggerated version of the people our public institutions and policies would often seem to want us to be. The backdrop to all of this, like in the Dirty Harry movies also set in San Francisco, are these residues of social progress and struggle, forces represented by the counter-cultural non-conformism of Jeff Goldblum’s character; the flakey pop-psychology of Leonard Nimoy; and the subtle, yet inevitable, romance of Sutherland and Adams. Like the pods of Invasion of the Body Snatchers something threatens our humanity essentially. Only this force, mediated by the film, is not from outer space, or even really from outside us. And it is this fact to which your own work bears witness, phenomenalizing it through a syntax which gives form to the primal rupture between ‘inside’ and ‘outside’—where ‘person’ begins and socius ends; where interiority becomes radicalized by an external pressure of events, if not an empathy which overwhelms any account of individuality without exteriority (the need for friends, compatriots, lovers, neighbors, countrymen; the encounter with those inexplicably and mundanely ‘other’). What I am saying—something I would like to say, rather—is that conspiracy infuses your work, rendering it potent. A conspiracy, on the one hand, which threatens the social frameworks and communities through which ‘we’ have no choice but to exist. And a conspiracy, on the other, of knowledge that any interior is hopelessly dependent on the irrevocable connection of all beings, a fact underlying your particular brand of Buddhism, and your commitment to Gertrude Stein’s experimentalism, and a landscape exceeding in its reality any visual or aural description one can make of it. The pods, and the pod people, and the network—the original ‘social network’ called city—partaking of ‘us’. Dear Leslie, who invented an uncompromising grammar—a daring language practice—to embody our ceaseless correlation and conflict.
Posted by Thom Donovan at 12:57 PM No comments:

I, you, and we,
We have become dis-
enfranchised equals this
Desire to see your actual-
statuary-backside
Of the face you are naming
Power with
Speaking truth to sunset
By seeking out shadows
Folds of your robe
If with a backward look
Took'd from that flatbed.
Posted by Thom Donovan at 4:41 PM No comments: 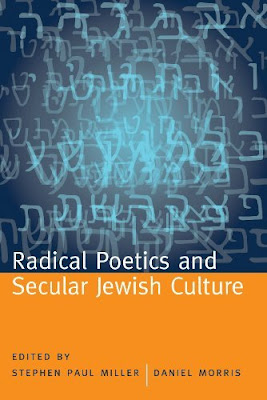 Last spring ZEEK asked me to write a review of Radical Poetics and Secular Jewish Culture (U of Alabama Press, 2009). Just today they have posted the review along with poems by anthology editors Daniel Morris and Stephen Paul Miller:

This Jewish influence begs the question: could Robert Creeley or John Cage not be considered Jewish practitioners in regards to the qualities expressed by their work (as a student at SUNY Buffalo I recall Creeley repeatedly making the remark that he was in fact Jewish in his heart). To what extent, I might add, could Language writing, though many of its practitioners are not ethnically Jewish, be considered an aesthetically Jewish practice? Language writing’s roots in Objectivism, Gertrude Stein, Laura Riding Jackson, European and Russian avant gardes, and poets such as Jackson Mac Low, David Antin, Larry Eigner, and Hannah Weiner definitely suggests this case of elective affinity, if not kinship itself.
Posted by Thom Donovan at 2:50 PM No comments: