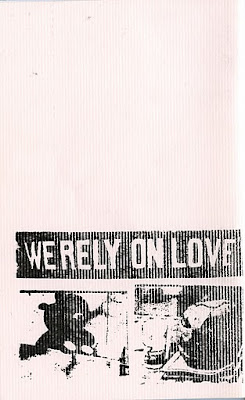 The first intention is embodied fully by a project Rigo 23 has been making in Madeira Island, Portugal, where he is originally from, which involves the making of a statue to commemorate a dispute between the local community and the Catholic Church of Portugal (This the People Will Never Forget). In this project, the artist erects a statue of the Virgin as seen from the back of a pick-up truck, commemorating the fact that locals were slighted by the Church authority by not being able to host the statue, and were treated instead to a passing glance of the statue’s backside upon the truck’s flatbed. Rigo 23 also foregrounds the community’s sense of injustice by employing local embroiderers to embroider all the signatures from a petition to the Church upon strips of raw linen —an act which, as the artist tells us below, also reflects the conditions under which the embroiders labor.
Posted by Thom Donovan at 3:14 PM No comments:

SLOPE 47: THE INTERSECTION OF POETRY & FILM


That little limit
Of the distance
Between ourselves

And the world,
Ourselves and event
Witnessing the haptic

Sense of the hand
Touching you,
The nipple tugged

And toggled
Beside one’s self.

Busses loop this place
We would be, this city

That might identify the body
If it were here

Or the crowd
Would not disperse.

A form of living with
Death inside a present
The words one writes
Withdraw us from.


Like a camera
Swoops in - it
Swoons and we
Are not unlike
It - gliding in
A sense of one’s
Own appearing
Among others.


Where we meet
Where the body
Touches other
Bodies,


Come to your senses
Come up from air, for air
From all this mumbo jumbo

The distribution of the senses
We are living in a grammar
Of commons, the most beautiful

Does not grasp it, reassembles
The surround called sunshine
Already lapsed to an idea

In this event, not on the inside
Are you beautiful to me
For all time, but being

What we are when we are
Not writing, social substance like
A tracking shot makes 'me' area

And moment and movement
--a type of twice dying one
Experiences before their death.
Posted by Thom Donovan at 6:26 PM No comments:

Recall Russian filmmaker, Andrei Tarkovsky’s 1979 film Stalker. In one early scene of the film when the three men are exploring that seemingly supernatural territory called “the zone” the camera tracks through an open field, then through the window of an abandoned car, until finally the stalker and his two companions pass in front of it. One perceives the shot to be subjective—from the point of view of one of the men. Then who’s perspective is it really?

Renee Gladman, whose 2007 book Newcomer Can’t Swim includes a poem called “Zone” written after the film by Tarkovsky, puts her readers in a position similar to Tarkovsky’s audience with regards to narrative chronology, space, and point of view. And Gladman’s writing is indeed a kind of zone—labyrinthine, looping (“circling” as she refrains throughout all of her books), evental. Where one makes it ‘through’ (as it were) only to not quite know how they got there. (As the narrator of “Untitled Colorado” says, “What happened back there?,” to which her lover replies, “Could have been anything.”)

In the narrative spaces of Gladman’s work one feels one’s self constantly at a horizon of events, jumbled by the dense gravity not of a black hole, but of our own social relations. In Gladman’s 2003 book, The Activist, the map of the activists “mutates” just before they are to deploy their plan. In the second text of Newcomer Can't Swim, the narrator searches for her destination—a hotel where a lover lives—constructing a kind of cognitive map through things she remembers the lover saying about her neighborhood. Cities are not just cities, nor a home simply a residence—but prostheses which extend and point back to ourselves, demarcating boundaries, time-sense, communal thresholds.

Underlying much of the content of Gladman’s texts is a unique sense of skepticism about one’s ability to be in common. This skepticism is a singular one, irreducible to a commentary about “identity.” Through it, Gladman discovers the “subject” in the breakdown of things—and principally of communication itself. But also, particularly in Newcomer Can't Swim, of a body. Throughout the book, Gladman alludes to an accident scene. Her character is lying on the ground, waiting for paramedics to arrive. Yet, as a result of the accident the narrator discovers where it stands in relation to others—lovers, strangers, the French EMT whose English begins to falter at the chaotic accident scene.

What I guess I am trying to say, is that Gladman—through the language forms which she develops in each one of her books—is finding a way to locate the self deictically, in negative; at the various points where a self would seem to be absent, whether negated by physical pain, or exile, or some more obscure, but equally profound, unworlding. In the misunderstandings, the misperceptions, the botched schemes, Gladman defines who her characters ‘really are’ within a set of social relationships.
Posted by Thom Donovan at 5:16 PM No comments: