Antonioni (a point of indiscernibility) 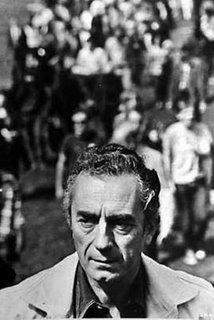 Across Antonioni’s filmmaking, there is a recurrent moment of perception that may allow us to reflect on an emergent imagination after cinematic images. I believe that Gilles Deleuze touches on the potential of these perceptive moments when he considers Antonioni’s filmmaking in terms of what he calls “any-space-whatever” and Op and Son images in his *Cinema 2*:

"As for the distinction between subjective and objective, it also tends to lose its importance, to the extent that the optical situation or visual description replaces the motor action. We run in fact into a principle of indeterminability, of indiscernibility: we no longer know what is imaginary or real, physical or mental, in the situation, not because they are confused, but because we do not have to know and there is no longer a place to ask. It is as if the real and the imaginary were running after each other, as if each were being reflected around the other, around a point of indiscernibility."

The scenes of “any-space-whatever” that most interest me in Antonioni’s films, and which I would like to appropriate for this project, are ones construed too easily as hysterical. Beyond a clinical or “common sense” diagnosis of hysteria, the bodies of many of Antonioni’s most significant characters may be telling of a condition of psychic-bodily dissociation related to our present post-cinematic condition. What is sense and where is it located in space when the image one has of bodies related in space is elsewhere: withdrawn, discoordinated, psychastheniac (Roger Caillois)?

Continually this is the question I ask myself watching Antonioni’s films until his post-’68 work, Zabriskie Point (1970). Curious as a film after American counter-culture and social movements in the late-60’s (and not so different than any numbers of films in this regard: Hal Ashby’s The Landlord, Peter Watkins’ Punishment Park, etc.), Zabriskie is of particular interest to me as it presents a clairvoyant and senseless imagination in the face of social despair and political-judicial distopia -- the “states of exception” of the late-60’s/early-70’s American polis and a “globalizing” polis now.

Like any number of Antonioni characters, the female protagonist of Zabriskie puts the viewer into an ambivalent situation of perception, a point of indiscernibility (Delueze), in the final scene of the film: is she a terrorist in actuality, or does she only imagine the detonation of a bomb at the hotel? How does this scene form a mirror for the perceptive lapse earlier in the film that forces the viewer to adjudicate whether the male protagonist has in fact shot a police officer or if he is merely a hapless innocent? Moving from a meditation on such images shall we consider particular tactics for revolutionary violence not in terms of sensory-motor coordination achieved in purposive movement, but in terms of an eidetic imagination imminently destructive in virtuality *and* reality inasmuch as the real is increasingly determined by the virtual? If this project risks creating a critical fiction it does so only to mobilize factuality towards a new situation of demonstration and thought we currently bear witness to in the wake of “Terror” and other geopolitical quilting points.
Posted by Thom Donovan at 11:32 PM No comments: 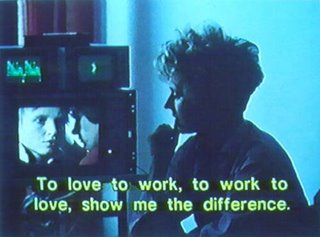 Or why are we still working in this factory?
to Sasha Steensen

To come down by a movement in which gravity plays no part. . . . Gravity makes things come down, wings make them rise: what wings raised to the second power can make things come down without weight?
– Simone Weil

And love why are we
Separate
And why don’t we turn
Why do we
Still work
In this factory
Do we still love
The sight
Of paint as it lights up? 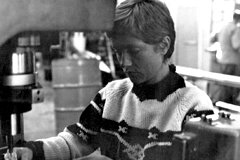 Currently I am trying to take WHOF off blogger.com. I am doing this out of want to not support a corporate site such as blogger, as well as to organize the blog more effectively. Here are two prototype images for the new weblog-site: 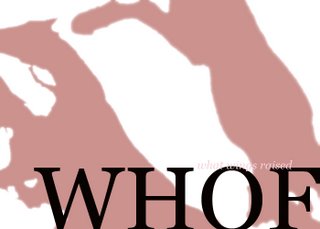 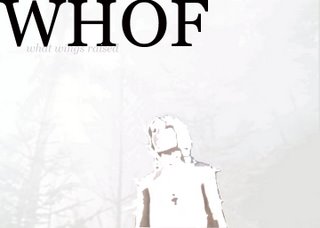 Posted by Thom Donovan at 2:39 PM No comments: 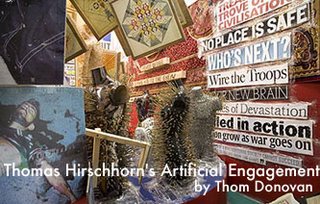 Check out my review of Thomas Hirschhorn's "Superficial Engagement" and other featured works at Casey McKinney's online journal, Fanzine (www.thefanzine.com).
Posted by Thom Donovan at 1:42 PM No comments:

Michael writes of sun, but all I can think
of is sunsickness, too much in the sun
never a daughter. As if God’s
light still shone on we who have shaded
our eyes.
– Charles Bernstein


Hardly veritic
a bold sun
moves below
(a sun, the son)
assuming place

Emptier
than light itself,
more weightless than any
two year old
mule.

What wine won’t
pass and
bread any longer,
commoner solarized?

But there won’t be
this reckoning,
pilgrim
let it be said ...
no birds surprised, no sun arrived
in this film’s unmaking.

Surprise us we are
still
trying to wake
up from ourselves this history
of night sunlight
burns
caesuras half-deferred
flies in the appointment.

Up-late with
Descartes
the owl flies by night
but we are still here
(We are
we are still
still here)
chiasmic as
the present is long
and hangs
like the hives of deixis
in hell’s
equal reverse.

We are still here ...
the bandage eventually
becomes
the face the mind
has concrete
for ears the better
to cover us with

The poetry must give shade as well.
It was always gonna rain
(when it should not). 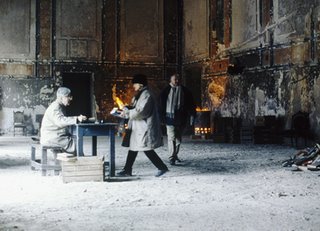 Nuns submit, children throw
Bunker stones
Striving
To love the one
An anti-love
Come to me and flee to come
Numeric bits of stones

"Thank you for
telling

art with this kind
of rituals

I will check
it out

I was reading
your blog yes the

in Islam is really

very different
from the Christian

actually I
am not sure

if it is right

cultural traditions
with whatever

is a secular country
but has extremely

and traditions
in Turkey

the dead
are buried under

the soil
with no

in a white linen

the idea behind
is that

but the soul has
so the flesh

should combine
with the soil

as soon
as possible

if there are flowers
spread
from that soil

and the relatives
of the dead
water

these flowers
on the tomb

the faster
the body becomes

one with nature
the better
it is

as for my project
being close to home

well yes and no

today's
Konya is a very

place I was born
and raised in Ankara

the capital
which is a very modern

difference between these
two cities

although the physical
difference is only

Sufism is
an other world

the 'Asia minor' then
was much
more

and much
less political

than the 'Asia minor'
now

many people
are happy to associate

with recent politics
and with

something
I cannot stand

mentions the issue
of life

& death in his poetry

it is not
exactly a chair
but

a reading table
it has

and you place
a book

the person who reads
from rahle

on the cushions
I don't know

if you can find one

in this country or

at least
for sale

but I
was thinking
of

one DIY”
Posted by Thom Donovan at 1:22 PM No comments: