Kocik in ACTS Eigner Issue (The Extent To Which)

John Sakkis just sent me a photocopy of ACTS magazine's Eigner issue, which contains a feature by Robert Kocik. Here are two of my favorite consecutive paragraphs from the 3 page, typewritten feature:

If lines roughly the same length all share a left margin, one rectangle (the poem) has been placed onto another rectangle (the page). In L.E.'s early work, this page-bound "deadset" appearance was broken up by leaving blanks at the beginnings of lines where words had been deleted to gain immediacy. Interior and end-line lacunas were developed by dropping commas. Erasure such as this is now a matter of habit--the revision, initial. [my italics]

The question 'how much can things go together?' is asked along with questioning the extent to which poems can be made to cohere.
Posted by Thom Donovan at 6:49 PM No comments: 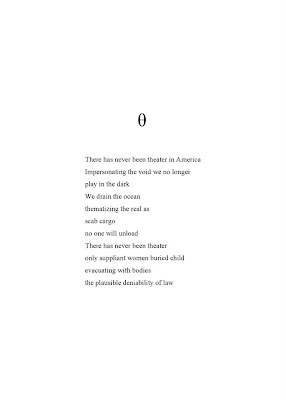 Here is a review of Eleni Stecopoulos' Autoimmunity (TAXT, 2006) that I wrote for Jacket magazine: http://jacketmagazine.com/36/r-stecopoulos-rb-donovan.shtml.
Posted by Thom Donovan at 12:13 PM No comments: