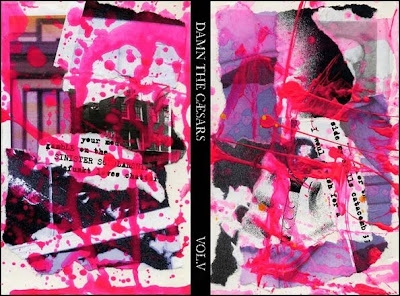 Check out the fifth volume of Rich Owens' Damn the Caesars, which includes a gallery featuring new work and an interview by Brenda Iijima and Tyrone Williams.
Posted by Thom Donovan at 2:37 PM No comments:

Blood of the Beasts

--for Dorothea Lasky and Brenda Iijima, after Temple Grandin

There is an automation of the eyes
That brings the whole to peace when
The animal is touched and not whipped
Ritual is what survives them the soul
Is anything that remembers this.
Posted by Thom Donovan at 1:30 PM No comments: 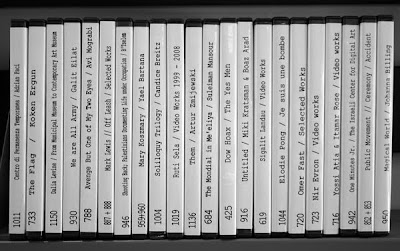 ...at Art in General. Here is an excerpt from an interview I conducted with Mobile Archive curators Galit Eilat and Chen Tamir, which will appear in FANZINE soon:

Thom Donovan: Do you see an evolution to the archive based on the different places it's traveled to? Do you perceive moments when the archive has changed dramatically? Moments of sea change in the collection?

Chen Tamir: It's always changing because each institution adds up to twenty-five DVDs. By definition it changes each time because it has to with each stop.

Galit Eilat: But I think the archive also depends on which institution is curating it, and making decisions about how to deal with it, how to present it. So it's not just the content, but also the form. What discussions will come with it? Discussion can arise around different issues related to the archive. So we are not only talking about the video works themselves, but how they become articulated. That's what I mean by "form."

TD: So each different institute articulates the meaning of the archive in its unique way?

GE: It's a different context. Different curators choose to show different works to a particular audience.

TD: Why are archives which cross international boundaries important?

CT: I think it's about facilitating dialogue and cross-cultural exposure. The work that's in the archive is coming from very personal perspectives, but together they create evidence of certain mind-frames within cultures, certain issues important to particular cultures. The more these videos are watched the more understanding we gain. For example, a lot of the works in the archive are from Israel or Palestine, the Middle-East and Eastern Europe, and for them to come to New York right now while the US is at war with Iraq and Afghanistan and in an economic war with the entire world makes it extremely urgent that we establish dialogue between cultural producers from those parts of the world.

GE: For me, it started with the permanent archive, and using videos from the archive in presentations. The traveling archive grew out of a desire to share with other places and also out of the idea that other institutes would contribute something we were not aware of or we don't have the possibility to communicate with because it is from another country, continent or nation. All of this was especially important given the geopolitical context where I come from, where there is not much dialogue between countries. By having the archive travel it is easier to engage in dialogue. Already the archive has contributed quite a bit in this way.

CT: It's also interesting to think about the economy of these archives. A lot of artists don’t upload their videos online because this is not a framework they'd like their work shown in--they would prefer exclusivity for their work, for it to be presented in a gallery--but they do want the exposure a traveling, exhibited archive provides for. And the archive is more like a library since none of the works were purchased, but given to the archive by artists for distribution. You could think of it as a library of viewing copies of these works which otherwise would have market value but do not because they are not editioned. But they do have value. They are physical things, and we have them. Someone may have paid $5,000 for them, and it's in their house, or a museum may have purchased them. It's sort of a parallel economy.

TD: So it's somewhere between the YouTube model and the exclusivity of a private collection?

GE: The archive foregrounds the symbolic value of art works. In fact, we may distinguish a collection from an archive in terms of an archive's symbolic value. The former is dealing more with market value, the later with symbolic values. This is one way to imagine a different economy. What if we distribute works without instruction, without a manual? How then to communicate with the artists and between institutions? The value of works of art become determined more and more by how they are shared.

TD: Could you clarify the term "symbolic value"? I think I know what you mean, but just wanted to make sure.

CT: Cultural value vs. economic value. You can't put a price on it.
Posted by Thom Donovan at 11:50 AM No comments:

David Wolach on his Occultations

David Wolach has made interesting mention of the Nonsite Colletive in relation to his Occultations, a book which I would recommend, especially for those interested in intersections between cultural politics and visionary poetics. Here is an excerpt from Wolach's full essay, which can be found online here:

The work of those who have contributed to Nonsite Collective—Rob Halpern, Taylor Brady, Kaia Sand, David Buuck, Jules Boykoff, Thom Donovan, Eleni Stecopolous, and others--gives us a related, but higher-stakes and, I think, richer poetics in this regard. A couple years into exploring these questions, Rob Halpern invited me into the conversations that Nonsite was (is) having. The discussions have been enormously generative, as Nonsite was (is) asking, in various ways, those very questions: what the use of our explorations might be, how metaphor (here, in contemporary experimental poetries) obscures and yet has the potential to reveal that which is obscured—those sites and nonsites (i.e., systems of power/powerlessness mapped or made perceptible) that are socially invisible (Zukofsky: "As the eyes / near wreck / to create"). In their draft proposal, Nonsite affiliates write: "[Nonsite] will activate affinities between an array of efforts to make perceptible, apprehend, map, or narrate consequential social phenomena and occulted disasters." Reading this, having a book called and dealing with occulted disaster, really excited me, and nearly immediately Nonsite conversations complicated the project. And so Occultations, indeed the poems here, have become more than insular explorations; they've become conversations and at times critique of how and whether poetry is in a position to "make perceptible" or "narrate" "occulted disasters."

So, beyond the more obvious interest in the occulted disaster—here, in these poems, the languages of "news by internet" and "poetry while fucking" and "shotgun healtcare" and “pharmaceutical discourses” rehearse a flaccid attempt to lay bare to a capital-driven wartime suffering and know if not acknowledge the econsystems of those who are completely other—I'm also interested in poetry as occulting itself, or, perhaps more precisely, the degree of inertness the contemporary western poetic black market expresses in the face of systemic/global disaster—what Buuck (The Shunt) dubs “war dash time.” Are we, in fact, in asking these questions, our own category errors?
--David Wolach
Posted by Thom Donovan at 11:10 AM No comments:

-for Galit Eilat and Rachel Zolf

Beyond speech are
We so far behind
What could have
Possibly been said.


I am thinking of
Walls differently now
Than when they came
Down as a result
Of your gun site
As a result of your fist
Pounding against
The doors of the powerless
Your Sawzall cutting
A hole to the other
Side of the wall
We have stories to
Prove this and
All of them are false
Never was there
Salvation in not
Being captured.
Posted by Thom Donovan at 11:25 AM No comments: