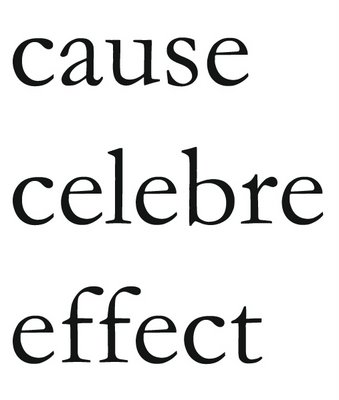 Posted by Thom Donovan at 2:56 PM No comments:

Partisans, reality makers, History with a capital "Is"

In the eyes of song the present goes on

The wager knows the bow of suitors

When become must suffer six strings

My native piece
Blind to our
Plate-glass-nation

Floats by
A kind of lapse
Which one

There is your
Body like my eyes
Alive because they doubt

Two bodies lean
one against the other

absconded from the enjoyment
of its earthly bounty.

one's guarded
the other's a martyr

of global multiplicity
fair game for the shady.
Posted by Thom Donovan at 1:21 AM No comments: 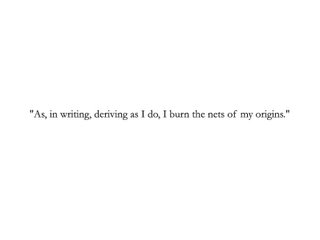 "The poets were all reading Machiavelli when they should have been reading Clausewitz."
Posted by Thom Donovan at 11:39 PM No comments: 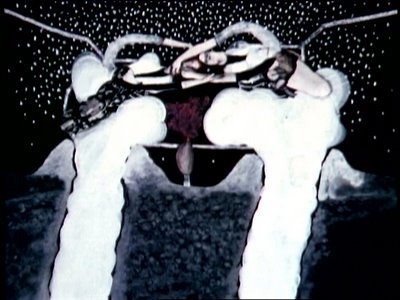 In David Lynch’s third shorter film, *The Grandmother*, seeds give birth to human beings who behave as dogs in accelerated and non-linear generations. Is *The Grandmother*, then, not a film concerning rhizomatic deterritorialization? A nomadology of seedlings? “The wisdom of the plants: even when they have roots, there is always an outside where they form a rhizome with something else – with the wind, an animal, human beings.… Follow the plants: you start by delimiting a first line consisting of circles of convergence around successive singularities; then you see whether inside that line new circles of convergence establish themselves with new points located outside the limits and in other directions. (*A Thousand Plateaus*, 11)” Perhaps. But then the cinematic universe Lynch establishes in *The Grandmother* seems “archetypal,” preformalist or Occasionalist more than anything else. Lynch often says of his first film, *Six Men Getting Sick (Six Times)*, that he came to it in an attempt to make his paintings "move"; that is, to animate them. What is animation but a limit of cinema as false generation of movement (Bergson), or as an atomization of time per frame? False time, false movement, false generation.

*The Grandmother* is the second of two films that move from the painterly animation of Lynch’s first towards an original blend of diegetic “movement images” (Deleuze) with extra-diegetic and animation techniques. In the film, seed growth belies an inorganicism of the falsely generated, non-linear and preformalist. We can oppose the false generations of Lynch’s films to the non-organicism of Deleuze’s “crystal images,” where such images are generated by the bifurcating movements of actual images reflected in the uncanny opacities of their virtual counterparts: “This is unequal exchange, or the point of indiscernibility, the mutual image. The crystal always lives at the limit, it is itself the ‘vanishing limit between the immediate past which is already no longer and the immediate future which is not yet . . . mobile mirror which endlessly reflects perception in recollection’. What we see in the crystal is therefore a dividing in two that the crystal itself causes to turn on itself, that it prevents from reaching completion, because it is perpetual self-distinguishing, a distinction in the process of being produced; which always resumes the distinct terms in itself, in order to constantly relaunch them.”(*Cinema 2*, 81-82) These “powers of the false” of crystallic-virtualism—a virtualism which rests on Bergson’s crucial distinction between the dyadic terms real/possible and actual/virtual—we should distinguish from a preformalist organicism underlying that of Zoroastrian-Islamic aesthetics. Where crystallic-virtuality presupposes Bergson’s method of philosophical “intuition”—to locate form tendentially in irreducible temporal movements (or Durations)—preformalism assumes organicity as a consequence of the realization of preexisting potential forms (“templates” or clichés). Here, realized forms are the “copies” of possible forms as in Plato; however, per the magic of Surrealist exquisite corpse collage and primitive montage, ages and spaces (not to mention generations) may also meet in highly fortuitous assemblage. Counterposing the irony of Gertrude Stein’s statement from her lecture on “Portraits and Repetition”--“the only thing God can not do is to make a two year old mule in a minute”--such a view of creation assumes (following Jalal Toufic’s own Atomistic view of cinema in his essay, “Before thy Gaze Returns to Thee”) that Being is non-continuous, renewed during each “subsequent" instance: “Out of the clash of any two images, but even more clearly of any one image, do not arise, as in Eisenstein, many concepts (even if, as in Einsenstein, beneath them all be the concept of the dialectic itself or of class struggle), but a *dhikr* (invocation, remembrance) of the one necessary Being, who is beyond concepts; or the notion of the absolute dependence of the myriad entities. The jump cut, 'the sound of one hand [or image] clapping,' is a silent *dhikr*. Forgetfulness of God is a molar illusion, since creatures, not having their substance in themselves, are always returning to that which alone has subsistence, God. (*Forthcoming*, 121)”

In an early animation sequence from *The Grandmother*, the grandson ascends from his sprout-bed in order to abscond from his belligerent father. Analogously, throughout the film, the grandson negotiates what appear to be the three stories of a house: a bottom floor in which the grandson’s demonical, canine parents sit around a kitchen table and taunt him; a second floor where the grandson's bedroom is, and where he is periodically punished for wetting his bed; and a third in which he “grows” his grandmother, and he and the grandmother subsequently visit with one another. In ascending and descending the stairs of Lynch’s set, the grandson presents a typical movement from Angelosophy—the higher floors indicating subtler and thus more perfected degrees of Being, the lower the more demonical-animalistic. The shock of Lynch’s false generations is finally heightened by a passionate kiss shared by grandmother and grandson, as well as by a high-pitched whistling sound emitted from the grandmother’s throat, reminiscent of the sirens from *Six Men Getting Sick (Six Times*), and premonitory of Lynch’s first feature-length film, *Eraserhead*, in whose soundtrack many have claimed to hear super- and sub-audible pitches. Are the effects we know Lynch to have produced with fellow sound designer, Alan R. Splet, during the making of *Eraserhead* not evidence of a paradisical subtlety available through rigorous experiment in film soundtrack?

The problems of generation and temporality endemic to *The Grandmother* look forward to later Lynch films, and especially his most recent ones—*Lost Highway*, *Mulholland Drive*, and *Rabbits*—in which one encounters countless conundrums of narrative temporality. How, for instance, the protagonists of *Lost Highway* and *Mulholland Drive* are bifurcated by identities indicative of multiple temporal universes; likewise, how the characters of *Rabbits* occupy the same space/set however speak distantly, as though from different points in time, the lines of a mock situation comedy. That they are rabbits—those uncannily prolific creatures—who become the ostensible subject of one of Lynch’s most recent films, adds a comic dimension to his ongoing problem of generations ahistorical and “false”.

*a previous version of this text may be found among the March 2006 postings of this blog.
Posted by Thom Donovan at 11:37 PM No comments: