The Next Big Thing (survey)

1. What is the working title of the book?
Withdrawn

2. Where did the idea come from for the book?
My next book, provisionally titled Withdrawn, like my previous book, The Hole, concerns how lyric valuables emerge through a discourse. But also how one wants the poetic content to disappear and discourse to take over. I wonder sometimes if we should not throw away the poems after we are done using them. To amuse and seduce and draw-out others. They are relics and ruins as soon as we write them, so what if they turn to dust? I don’t know how to write such a book, so right now I am grappling with how it could possibly appear in the world. “Grappling” means sending it topeople who can help me understand it, and who might become its co-authors in turn. What I want to risk through these modes of production is not the fetishization of collaboration—a trend in both poetic and aesthetic discourse—but rather a becoming vulnerable to the input and aid of others. There is want for dialog, but also more than ever for disagreement. I imagine the blurbs of the book (if it should have any) being deeply ambivalent, perhaps even entirely negative. The poems express a longing for collective enunciation. The book ends with the Occupations of 2011-2012 tellingly. It mourns the death of Leslie Scalapino and others along the way. Death being the ultimate withdrawal.

3. What genre does your book fall under?
N/A

4. What actors would you choose to play the part of your characters in a movie rendition?
I would like to think that one could strike a balance between Joss Whedon's emo/camp and Bresson's deadpan coldness

5. What is the one sentence synopsis of your book?
Our feelings are an apocalypse.

6. How long did it take you to write the first draft of the manuscript?
5 yrs

7. Who or what inspired you to write this book?
Friends, comrades, other muses. A constant oscillation between feeling another world is/was possible and something more ambivalent.

8. What else about your book might pique the reader’s interest?
Possible contributions from others.

9. Will your book be self-published or represented by an agency?
Neither, I hope.

Posted by Thom Donovan at 2:11 PM No comments: 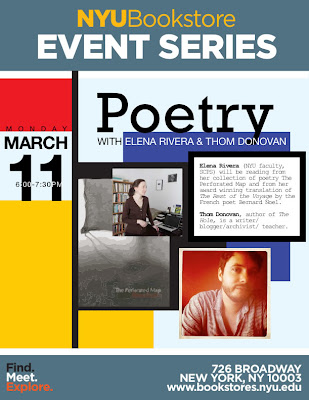 Posted by Thom Donovan at 1:59 PM No comments: