In Search of African-American Space at Pratt Institute 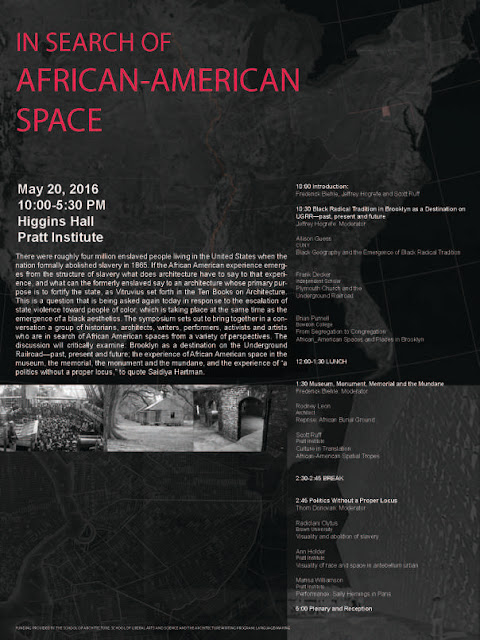 There were roughly four million enslaved people living in the United States when the nation formally abolished slavery in 1865. If the African American experience emerges from the structure of slavery what does architecture have to say to that experience, and what can the formerly enslaved say to an architecture whose primary purpose is to fortify the state, as Vitruvius set forth in the Ten Books on Architecture. This is a question that is being asked again today in response to the escalation of state violence toward people of color, which is taking place at the same time as the emergence of a black aesthetics. The symposium sets out to bring together in a conversation a group of historians, architects, writers, performers, activists and artists who are in search of African American spaces from a variety of perspectives. The discussion will critically examine: Brooklyn as a destination on the Underground Railroad—past, present and future; the experience of African American space in the museum, the memorial, the monument and the mundane, and the experience of “a politics without a proper locus,” to quote Saidiya Hartman.

10:30 Black Radical Tradition in Brooklyn as a Destination on UGRR—past, present and future
Jeffrey Hogrefe: Moderator


In Saidiya Hartman’s seminal Scenes of Subjections, Hartman takes-up Michel De Certeau’s notion of “practice” in order to document and analyze daily acts of resistance and redress by slaves. Through “practice” slaves expressed, in Hartman’s words, “a politics without a proper locus,” which is to say, political actions and expressions unrecognized by the official politics of the dominant society. If, to quote De Certeau, space denotes a “practiced place,” what are the consequences of reproducing space without a proper location and thus remaining, in Ann Holder’s words, “improper”? This is one of the central questions our panel pursues today, in relation to the experience of slaves and ex-slaves in North America. Despite the formal extension of civil liberties to African-Americans (and the limited enforcement of those liberties by the US justice system) I wonder to what extent the practice of a politics without proper locus remains essential to Black spatial practices and architectural design. Today’s presenters have so far discussed the spaces and places of the Black Radical Tradition and of the Underground Railroad. The following presenters will link these spaces and places to what Fred Moten calls “ante-politics”—the politics of the outside, of being anterior, of Black collective research and fugitive planning. By attending Black spatial practices, I believe we might contemplate what architectural and spatial propositions issue forth from a Black Radical Tradition. We might also imagine, following Frank Wilderson, what might be gained by “remaining in the hold,” which is to say, tarrying with spaces intrinsic to the slave experience, whether that be the hold, the plantation, or the spaces of flight and temporary refuge along the routes of the Underground Railroad. To what extent should rupture with Anti-Black civil society, what Aime Cesaire articulated as “the end of the world,” remain the guiding principle of Black spatial and architectural practice? What might a Black “ontology”—the specific capacities that extend from the experience of slavery and the continuance of its effects and structures in our era—offer to those wishing to intervene in and revolutionize the built environment? How, in Frantz Fanon’s words, do “zones of non-being”—spaces of forced labor, natal alienation, general dishonoring, and domination—not only necessitate rupture, but also produce desirable, if not ideal, spaces for cohabitation, socialization, and commonality? Given this panel’s critique of occularcentrism, I wonder too how Black spatial practices both resist the white gaze by facilitating what Simone Brown calls “dark sousveillance”—a passing under the gaze of white civil society—but also radicalize an ensemble of the senses. What are the sonic, olfactory, and tactile spaces of Black life and the Black Radical Tradition and how might these spaces, again in Moten’s words, “cut” and “augment” one another, thus conceiving an outside to dominant incarnations of political and social space? If, following Eduardo Glissant, Black aesthetics is defined by the artist’s “right to obscurity,” to what extent should architecture also aspire to be obscure, opaque, and illegible? Inasmuch as fugitivity and flight are intrinsic to the experience of slaves and ex-slaves, how can and does Black architectural space persist in motion—both a monument to and the embodiment of stealing away with one’s self? How too might architectural design embody what Neil Roberts calls “sociogenic marronage”—the ongoing collective practice of freedom that extends from the struggles and modes of life of slaves?