An End to Nostalgia* 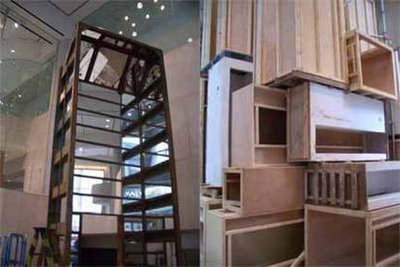 Mirrors are
For hiding in

The light too
Of incubations

Towering
Interiority of our

Curves
In the large

Universe this is
Remarkable

An obsession
With image-

Are to hide
In

A sympathy
Of radiant

They make
Images of

The creator
Occulted not yet

At sympathy
With itself

Nostalgic in this
Sense

A sense for
The creator itself

Absconded
To heal itself

By its created
The passion

And ruin
Of this hearth

This fire for
Coming

To Shamim Momim, upon touring Rob Fischer's *Living Will*.
Posted by Thom Donovan at 12:28 PM No comments:

"This ethic of resurrection..."

This ethic of resurrection, to which we have already referred (as an ethic of struggle against a retard, against a being-surpassed) shows us each adept supporting the responsibility of the whole Temple of the Imamate. By virtue of this responsibility the adept does not merely live *in* a fragment of measurable and measured time. He is himself the total Time of his own measure, and that is why the entire combat constituting the essence of cyclical Time is carried on in the cycle of his own life. Since this Time is a retard, the gap between the fall and the reconquest of angelic rank is the Time of the combat for the Angel. This expression (which results from our situation and reverses the famous image of "the combat *with* the Angel") is to be understood in a twofold sense. It is a combat *for* the person of the Angel of mankind (the third Angel who has become tenth), for the Angel does not carry on alone the combat which is to lead to the final reabsorbtion of Iblis-Ahriman, whose form reappears throughout the cycles of Occultation. But, since they have assumed his repentance and his nostalgia, his fellows, made in his image, become responsible in their own person for the combat that they wage *for him*. It is their own Iblis that they must hurl into the abyss, and in doing so they wage battle for the Angel who is in them *in potentia*. To reflect in oneself the Temple of the eternal Imamate is to anticipate the consummation of the aeon; it is here "to become aeon," to produce in oneself the mutation of cyclical or measured Time, and for each adept this consists in assuming in his person an increasing exemplification of the Angel's being. This implies that what occurs in and by the person of each adept also affects the being of the Angel who is their archetype and who finds exemplification in them.(49)
--from Henry Corbin's *Cyclical Time and Ismaili Gnosis*
Posted by Thom Donovan at 3:28 PM No comments: