To John and Taylor

There are walls that
Do fall because in

That falling we are
A community without

ster we must carry
With us everywhere

A protuberance this
Remaining which

Was never the given
ness of form or in

novation our various
complicities with the

Real a sky for your
Crying a hell for your

Song but as you also
Say birdsong some

where in between
Falling and rising in

Its different motions
We live & die by this.
Posted by Thom Donovan at 11:50 AM No comments:

Suzanne's Reply to My Meme 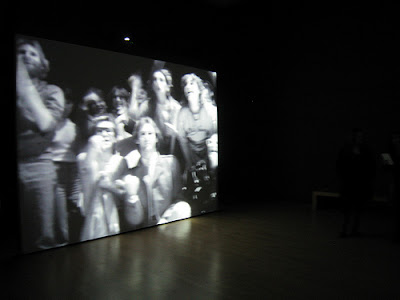 Suzanne Stein has replied to a meme I sent to her about a month ago after a reading she gave at St. Mark's:

My response is pending due to end of the year business, but thank you Suzanne!
Posted by Thom Donovan at 11:46 AM No comments:

“…an unforgiving, inchoate world.”
“No mold to make…”
“…I cannot tell you because it is not known.”
“But the body will not be buried there”
“Hands are scarred, almost dead.”
“You write “grandmother” and cross it out.”
“Finger pointed at the body and then at the sun, realized nothing and fell again taciturn”
“…as if I could, but could not”.*

Or perhaps it would be more appropriate to situate Lundy Martin’s negativity in writers closer to our own era, however no less mythical. In a tradition after the Negritude of Aime Cesaire, for instance, Lundy Martin’s work also journalizes her seasons in hell, making them literal joyrides, where to “go down” evokes literal encounter with one's lovers (women, in Lundy Martin’s case), and with the facts of one’s own gendered-racialized body.

“All that has been spoken. All that threatens the legitimacy of that which is attempting to be said. Phonemic struggle—I’ll call it a precursor to blathering. Scintilla. Something dragged in the sand.”

“The fit is tight. Splitting into? Stiff cup. A dark mouth moves, enters the tremor of a voiced, Uh. But, all this is not love, not love in the way one milks the center. Instead, chronic terror stripped to bone grating upon bone. Of down home, twang twang, and promise. My knees pressed behind ears.”

And as in Kim, Howe, Cha, and Lorde, in Lundy Martin’s work any coming into voice presents many difficulties, as it involves the presencing of irreconcilable social antagonisms and considerable personal suffering. But whereas Kim et al broach despair through the voices they undertake and inform through their writing, Lundy Martin’s writing winks at its reader knowingly, as though having already passed through affirmation, or being upon a threshold of that moment so central to overcoming—a conversion where “a no becomes a yes,” as Wallace Stevens might have it. That in her poem “Negrotizing in Five or How to Write a Black Poem,” Lundy Martin references the Negritude and Black Arts movements, Third Wave Feminism, femme ecriture, LANGUAGE writing and Susan Bee’s and Mira Schor’s arts journal M/E/A/N/I/N/G, pays homage to a continuum of radical arts communities while working in relation to these cultural formations from a revisionary distance.

What, in turn, rears its head necessarily in Lundy Martin’s writing is the specter of various struggles for recognition and liberation as they are given form by singularities—by the particular experiences and percepts of one’s autobiography, their life. Through Lundy Martin’s work, a work that can neither be said to be merely “experimental” or concerned with identity politics per se (though experimentalism and a politics of identity both inform that work’s authority), a culture work concerned to presence the stakes of particular identities within larger cultural formations becomes simultaneously legible and ambivalent.

*all quotations taken from Lundy Martin’s poems “Negrotizing in Five or How to Write a Black Poem” and “Unspeaking”.
Posted by Thom Donovan at 11:18 AM No comments: