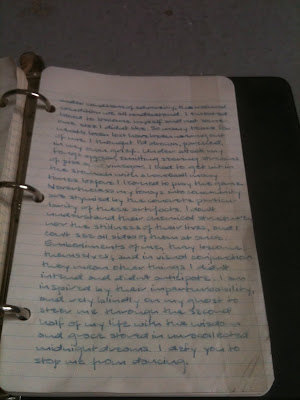 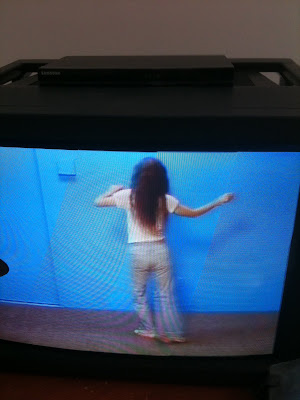 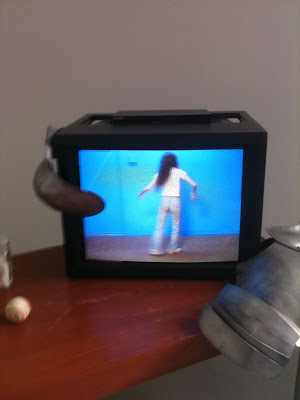 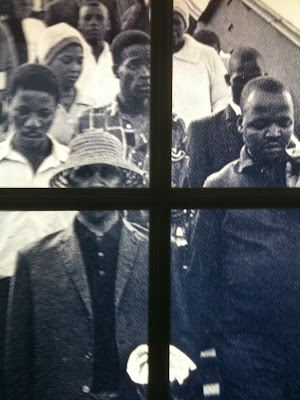 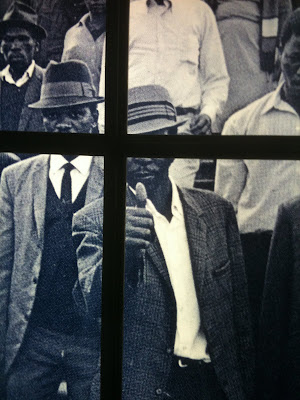 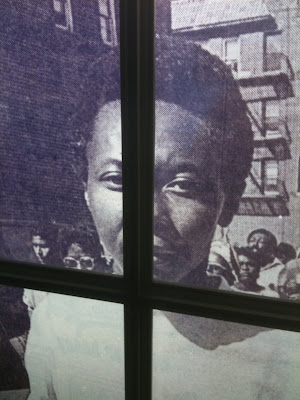 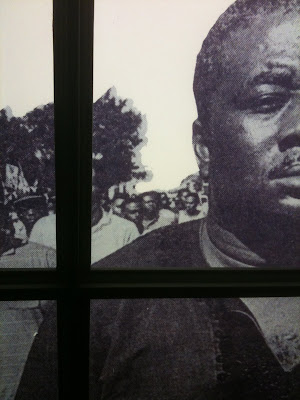 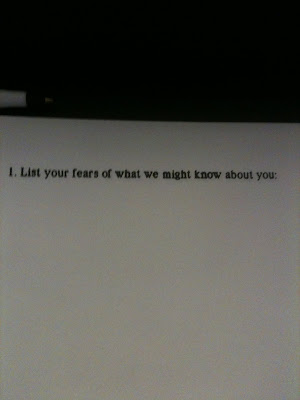 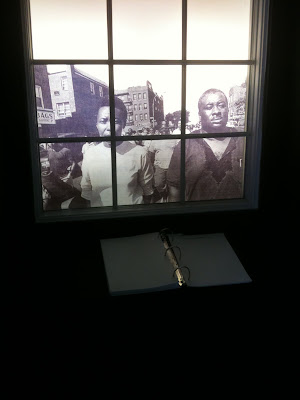 Posted by Thom Donovan at 9:56 PM No comments:

Email ThisBlogThis!Share to TwitterShare to FacebookShare to Pinterest
The legal anomaly of smog passing for unpotentialized fog. Is our actual dream in common. Is our nightmare systems move too quickly. The ocean pumps sound the world grinds to zero sums. Not because there is no consciousness, but because there is. The passage of clouds too quickly in our despair. First they sold-off our hands (remains), now it's time for our lungs, our skin. But I don't want to be a fucking last man. Fear of amor fati when we feel fucked in a global sense. What remains from your cynicism, sloughed-off. Bad affects abound across territories no one has the guts to legislate to regulate to legislate to regulate to legislate so we are all crowned fools. And if the whole world became a grave? And if your universalism led to a little island with perfect waves, a preordained sunset, a pile of cash--would we call this Robinsade or Robincide? Climbing over whose backs to the good life. No one even wants to save the moon. If not for the view from their little windows, which open while a million others close.
Posted by Thom Donovan at 12:59 PM No comments:

What remains if a commons isn’t common? A gust runs through us, an organ on the outskirts or outside this having. A specific body the real estate inside us. Sometimes the air is disguised as being shared. We have given up what has forced us to give up on history. Someone says "you are good" when what they really mean is you are easily fucked over. Docility, like a syndrome, the students respond "my education that’s what disaster surpasses me." My culture, what I have known, gives new meaning to entropy. The Dan Graham-like photo shoot of crystalline houses. Split-entry like a place where the past breaks with the present and ‘we’ becomes compossible. There is no commons, no passage yet within this interior. Except where I made the first cut the ear began its work. Of obligation, patient like the obligation to be sung into silence, the wishes of aporia. When aporia is the only passage, no return, no name across this law, no crossing out. Or erasing the face is enough, or giving back, to bring those bodies back. They want/we want their/our cut of the pie. But only get this cut. Parts of the part in blind sunlight. Shade pulled until there was no world. When what I mean is: don't get used to the night.

Almost soiled my self--is this calculable?--the retreat as ever into being, always being. I can hear their digging like Renfield in Coppola’s Dracula can hear all the insects and animal life underground. Fills me with a dread, telepathy of a thousand cranes developing, making vectors through my heart, my breath, my life, my love. Having harnessed the effort of a billion brutes where the commons is in actuality and what hasn’t been imagined yet? Compossible like gestures, gene pools, muscle memory. Compossible like an affect transmissible in collective expression. The faces reflecting me before speech became lucrative, codified as perceptible song on some retroactive-impossible barricade. There are gestures we are making unawares (true force of multitude?) and rhythms other than having (been) worked. Rimbaud imagined work as the principal source of infirmity, immiseration, anti-sociality. All the things the species has done in spite of this. All the nobility—that specific bodies persist in their dance. Inventing worlds because ‘I’ is what remains from their invention. Because, incalculable, bodies persist specific to their dysfunction. What ruptures us, a fulfillment of communitas.
Posted by Thom Donovan at 10:29 PM No comments:

A Grave In Exchange for the Commons (@ Jacket2) 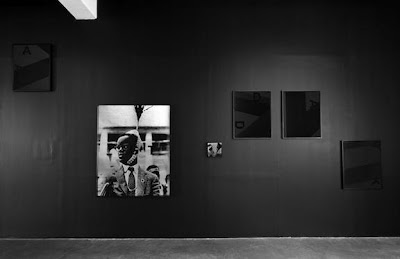 There is so much going on at the newly launched Jacket2, it is a little overwhelming. For my own part I contributed a piece on Fred Moten's poetics with regards to commons and the Black Radical Tradition. With much help from my wonderful editor, Julia Bloch.
Posted by Thom Donovan at 9:28 PM No comments: 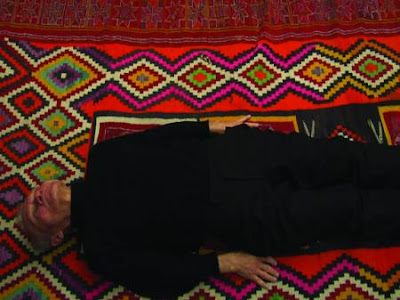 Here is a link to a live interview I conducted with Simon Leung, Sreshta Rit Premnath, and Warren Niesluchowski at CUE Art Foundation in Chelsea, NYC. The second event of the Project for an Archive of the Future Anterior.
Posted by Thom Donovan at 9:18 PM No comments: 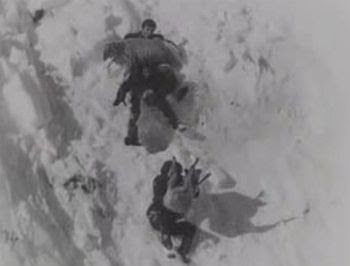 The new SHIFTER just came out, which includes an essay I wrote on "animal communism" with regards to the cinema of Artavazd Peleshyan. Check it out (in PDF and hardcopy) and support a great publication! Thanks to Rit Premnath for his editorial skills and to the editors of Rethinking Marxism where the essay will also appear in a forthcoming issue.

"Something often noted about Peleshian (in the little criticism I have found about the filmmaker) is his use of telephoto lenses—a lens often used for surveillance, and to obtain close-ups from a distance. Film scholars remark that this peculiar use of the camera was to produce candid, documentary/ethnography-style footage. My own take on Peleshian’s use of a telephoto lens is that it has something to do with the filmmaker’s ontology, an ontology that strives to create both a form of closeness and a form of distance through apparent closeness. To use the telephoto lens the way that Peleshian does is no doubt to have at a distance. But it is also to lose at this distance, inasmuch as it is to allow the view to be obstructed in often random ways, thus to break the illusion of proximity. As such presence and absence, concealment and disclosure intertwine—a spiritual modulation."
Posted by Thom Donovan at 7:19 PM No comments:

“AS NIGHTFALL DOES NOT COME ALL AT ONCE…" (@ The Brooklyn Rail) 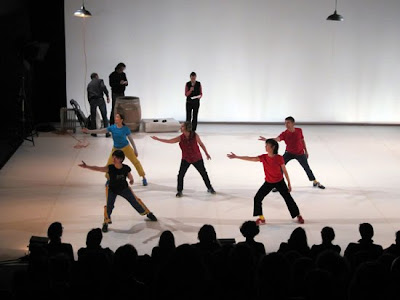 Here is a little review I wrote about Yvonne Rainer's performances at the Baryshnikov Art Center last month. Hopefully a sketch for a more extensive offering about Rainer's work (I had too much to say, and too small a word count).

"During much of the piece the dancers flock, proceeding around the dance studio in a rectangular formation, walking with their hands out as though about to receive a manicure. Periodically a dancer will call out a command—“toast” or “freak-out”—and the pack will respond in unison. Other times a dancer will break off from the group, soloing or reciting a text. As in Spiraling Down, Assisted Living: Good Sports 2 is structured through a series of passages by disparate writers and thinkers, including Lydia Davis, William James, and Rosalyn Deutsch. Many of these passages, which indicate the breadth of Rainer’s reading, are of a political nature, especially the recitation that closes the performance, which imagines political despair as a pair of eyes adjusting to the dark. They play off of the choreography itself, creating various frictions."
Posted by Thom Donovan at 12:35 AM No comments: 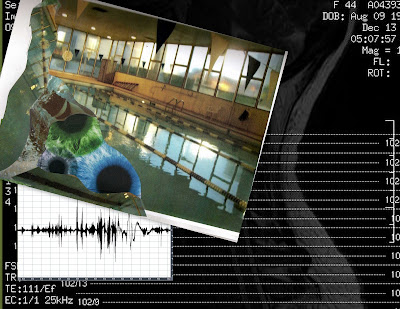 A selection from Amber DiPietra's and Denise Leto's forthcoming epistolary poem, Waveform, is now up at Others Letters.

"We began with conversations about how to hold ourselves in space, as both Denise and I experience considerable trouble getting out of bed in the morning due to our separate forms of chronic illness. We also exchanged images and made collages as part of this collaboration. This collage contains: the waveform (captured with sound editing software) of Denise and I laughing hysterically after a long night of editing, Denise’s MRI, photos of a warm pool where I swim, swimmer torso photo, and a brochure I received prior to glaucoma surgery."
--Amber DiPietra, on Waveform
Posted by Thom Donovan at 12:18 AM No comments:

When I see the Land-Art pieces which could remain like permanent exhibitions, or at least temporal exhibitions for some decades – in the appropriate conditions to be experienced inside or outside the institution –, or when I see that institutions have achieved a system to work and collect non-object works, I ask myself: Why are there no institutions doing the same thing today with art of social implications? Why is there no long term commitment by the institutions when they want to have social insertion pieces in their exhibitions and collections? Why is social art collected in the format of a traditional art medium alien to the demands of social art experience? Why do people want to have a conclusion before their eyes when public art works are not seen but understood, experienced, discussed…?
--Tania Bruguera, Paris, before the project starts
Posted by Thom Donovan at 12:33 PM No comments: