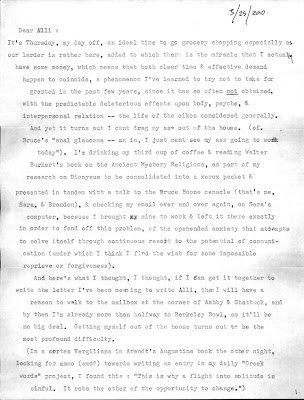 Check-out the second post of Others Letters, the web archive I started last month, which consists of an exquisite 5-page letter composed by David Brazil in response to correspondence with Alli Warren regarding poetry and social/political engagement:

my question/concern for you, david, is a selfish one
lately i have been unable to write because i am unsure of poetry's significance outside of the "community" and i want what i spend my time doing to be socially/politically engaged.
why do i spend so much of my physical, mental and emotional energy on poetry, when it often seems that this energy would be better spent directly engaging the issues poetry talks about/around? is my engagement in poetry a sign of cynicism and escapism? am i running on bad faith?
so i guess my question for you, david, is how do you deal with these questions on your end? how do you think of poetry's capacity to reach people besides poets and to maybe try to do something in the world?
--Alli Warren to David Brazil
Posted by Thom Donovan at 4:02 PM No comments:

Andrea Brady’s Wildfire is research intensive, and conveyed by a dense lyric. The research in the book concerns the history of ways that weapons of ‘fire’ have been used both to accrue and sustain power. All of this involves world history. It involves an account of historical and mythopoetic forces via fire.

Brady is getting at nothing less than a particular genealogy of human values. A la Clausewitz, an ethics of how we can fuck each other up and this can be ok, going back to the Greek discovery of kerosene. I admire how this book contains so much, condensed to the point of intentionally obscuring its contents. Meaning, like conflagration, flashes-up. Through particular names and dates, Brady sends us to 'the books'. But the sense of having to know to what she specifically refers is overdetermined by her lyrical agility, which is consistently on display.

There is another value to this book, which Brady addresses in her "note on the text." What would it mean to create a book that mediated the information saturation of our current moment without betraying the event which that information saturation described or was about? A time Wallace Stevens predicted when he observed the "pressures" of mediated reality during the second World War, and which Brady courageously takes-up in terms of what she calls the “failure” of a previous poem that attempted to approach the then-current Iraq War through appropriational writing strategies. What, more over, if the author could situate their own complicity within a distant geopolitical conflict—as citizen-conqueror; as poet-mediator; as one also given to the deadly fascination incendiary weaponry holds—through "not allegory but the recovery of materialist history, which tests the luxuries of myth and enjoys, but does not endorse, the luxuries of language" (70):

The failure of my first effort to write such a poem, Sweatbox, showed me unable to cope with a rapidly unravelling history. That text attempted to plot the Gilgamesh epic, tablet by tablet, against the daily war (the second invasion of Iraq). Epic fragments were transported by Penguin Classics to a nook in London then out back to a pixellated field sewn with cluster bomblets and the shards of the Nemean lion. I busied myself at the British Museum, reading the blurbs, constellating fragments as a melancholic formal reminder of the fractures and losses in real-time reporting and in the dispersal of a living culture. But I couldn't keep up with the news, couldn't fit that fast degeneration to an epic impasto worth thousands of years. My appropriations showed through: the desire for wholeness implicit in the phrases airlifted from news bulletins; the desire for the right and the position to speak, for consensus and legitimacy of representation. The absence of those rights and places, the mourning echoes of the epic voice, turned the poem all tawdry ironic—better than a barbaric silence, but only just. Besides everyone was doing Gilgamesh that year. I abandoned the project. (70-71)

Through Wildfire, Brady puts forth nothing less than a poethics of lyric corrosion and condensery. A poethics admittedly allergic to ways that the use of appropriation and search engines can reduce immanent critique to "tawdry iron[y]." Among a host of other prosodic and poetic complexities, Wildfire concerns our complicity with how 'found text' is used, aesthetically and tactically. Ironic rhetorical strategy is wrecked by a 'long poem' format that seeks to counter-act its own force, the pyrotechnics in which it participates and at times resembles.
Posted by Thom Donovan at 1:55 PM No comments: