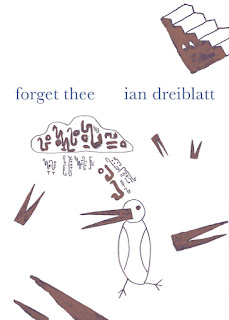 Despite the fact that it is 2020, and nearly 2021 when I write this, I want to remember Ian Dreiblatt’s Forget Thee as one of the great poetry books of the (post-) Occupy era. It arrives as an untimely meditation upon the long 2010s, a speculative, elegiac lyric of hope without hoping, clear-sighted and hearted intellectual pessimism amidst an attenuated collective optimistic will. In the first and last poems of the book I am transported to many conversations regarding (political) friendship after [Frank] O’Hara. To what extent can our most intimate relationships prefigure unacknowledged worlds and worlds of the unacknowledged despite their mediation by the commodity form (and social media specifically as an apotheosis of the commodity form)? And to what extent is a commons salvageable from the unfathomable wreckage of advanced racial capitalism? Assuming a choral mode, Ian forces us to consider a tenuous ‘we’ again despite the wreckage piling exponentially at our feet and the profound disparities concerning whom the disaster most affects. Employing interlocutors from antiquity throughout many of the poems—among them gods, poets, and ancient sovereigns—the task of the consummate translator-poet has never been more urgent, and ludic. Through his interviews with them he clears a space for critique and speculation, but also for a kind of lyric rarely heard nowadays. That specifically of thought’s fugitivity, its delightful fleeing from sense, and of the words of countless others—another mode of chorus—breathtakingly and breathlessly interwoven.

Posted by Thom Donovan at 11:01 PM No comments: