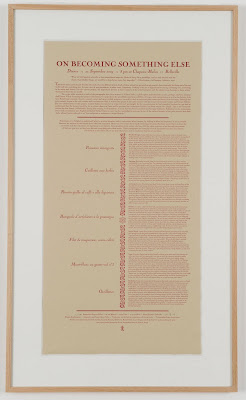 Here is a feature I did for Art21 with Ben Kinmont, a visual artist who also trades in books and culinary marvels.

"At one point, in the late 1990s, I had to decide whether to continue participating in the art world or to become an antiquarian book dealer who devoted 100% of his time to working with rare books. I decided to continue as an artist and bookseller. I stayed in both worlds because I realized that I was from the art world, that its history was my point of reference, and that its community was something to which I felt responsible, even if I was disappointed in it somehow. But to try and go on, I had to focus on connections to things outside of the art world, whether they were notions of social responsibility or exchanges with other disciplines. I was trying to broaden the range of what could be considered art and to open it up to questions from new audiences and participants. The art world was not enough on its own."
Posted by Thom Donovan at 3:38 PM No comments: