http://www.oncontemporaries.org/
Posted by Thom Donovan at 5:39 PM No comments: 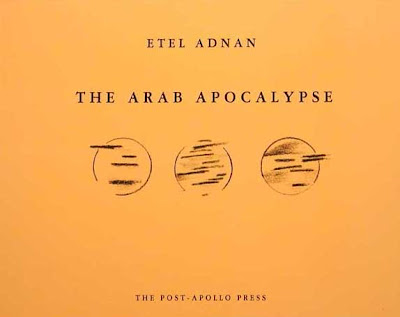 "Opposing the volcanic with the solar, Adnan evokes the power of the immanent as a power outshining the light of the sun. This power will produce a kind of interruption—an apocalypse—of the human that may lead to a night of “peace and knowledge” (a wish the book closes with). The volcanic moon will be brought down to earth—its cratered surface (only recently territorialzied by US astronauts at the time Adnan is composing her book) a mirror of the earth’s own volcanic surfaces—and through this inversion (both a geological one and a mystical one) an apocalyptic solar night will remember those of the Civil War. An impossible remembrance. The remembrance of occlusion, of occult discourse. A remembrance of the body which experiences the pain of the cosmos–the ears becoming little suns, the eyes becoming little suns. What Jalal Toufic calls “undeath”; undeath as a condition of possibility for remembrance, and for bearing witness to human and non-human (cosmic, terrestrial) cruelty. Jalal Toufic in his talk last week at St. Mark’s Poetry Project told me that to deserve the event (the event which is the disaster of the Lebanese Civil War and other all-too-human disasters) requires that one have collaborators. Evoking terrestrial forces–calling them “I,” saying “I” brings them forth–both Césaire and Adnan make the earth their collaborator, their texts/persons solar anuses (little suns shooting out of every orifice)."
Posted by Thom Donovan at 11:06 PM No comments: 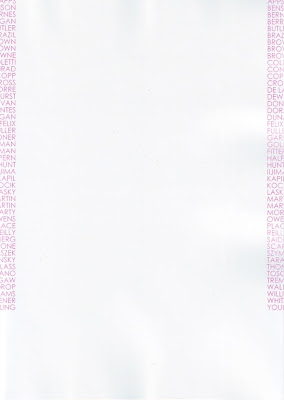 Here's my write up about the event and vol. 2 at Harriet.
Posted by Thom Donovan at 8:04 PM No comments:

To themselves as though
Among others I will not call
This community shouting
Over you all I hear is me.
Posted by Thom Donovan at 2:07 AM No comments: