I am very pleased to annouce that the second issue of Jamie Townsend's and Nicholas DeBoer's Con/Crescent is now available in a PDF. This "music" issue features essays by Matthias Regan, Patrick Lucy, and others. It also features a gallery I coedited on contemporary poetry and Rap prosody, with contributions from Lauren Levin, Alli Warren, Dana Ward, Paolo Javier, Chris Martin, Dorothea Lasky, Garrett Caples, and some notes of my own. Thanks to the editors for inviting me to participate, and to the contributors. My editorial statement for the feature is as follows:

After my suggestion under a post at the Poetry’s Foundation Harriet weblog this past spring that Jay-Z might be read in tandem with Louis Zukofsky in terms of their mutual indeterminations of an English lyrical tradition (the “pentameter” post-Pound), the editors at Con/Crescent magazine solicited me to write a short piece about Jay-Z. My response was that the editors and I might propose creating a gallery devoted to contemporary poetry and Rap prosody, to which the editors responded enthusiastically.

The following collates responses to a call for various friends and colleagues whose work we felt to be somehow determined by Rap prosody to respond to the influence of Hip-Hop on their work. I hope it is just the beginning of contemporary poets engaging more critically with the confluences between Hip-Hop culture, Rap music, and innovative poetries.
Posted by Thom Donovan at 11:31 AM No comments: 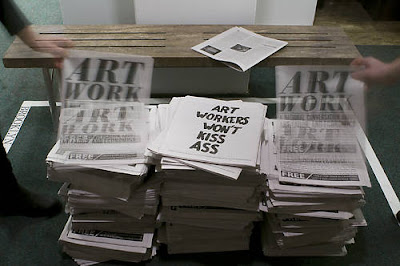 Here goes my first 5 Questions (for Contemporary Practice) column at Art21 blog. Thank you Temporary Services for your amazing responses to my questions, and for the amazing work you do through your art:

I always felt that kind of generation gap…we’re not so many years removed from some of these people, but you know when those artists like Karen Finley…when their grants were rescinded? I always remember feeling like, “They were expecting money from the government to do that work?!” You know? It seemed that they were of a generation in which you used to be able to really expect that, and because of that, sure, they were really pissed off when they had their money taken away. But I always remember feeling like, “How weird that they asked for funding.” And I think that response comes out being involved with underground music and publishing. I wouldn’t expect the government to give money so the Cheetah Chrome Motherfuckers could come from Italy to play in the U.S. [laughs] Of course the government wouldn’t care. Of course they wouldn’t support it, but Karen Finley expected it?
--Marc Fischer of Temporary Services
Posted by Thom Donovan at 4:50 PM No comments:

Or time becomes a general
Intellect within us
The commons in your breath
When I was cast back.
Posted by Thom Donovan at 1:33 PM No comments:

Thank you to Tim Peterson and Unnameable Books for hosting readings by Sarah Campbell and Eléna Rivera today, in celebration of Little Red Leaves editions e-book series. The following I presented by way of introduction for Rivera:

Sitting around a dinner table recently with participants in the Kootenay School of Writing, Rob Halpern, Talor Brady, Stephen Collis and others during a weekend in Vancouver, the conversation turned around sincerity, and the question of what a sincere affect might look like. It was Jeff Derkson who I believe raised this question, recalling situations on his travels in which people had to decide whether or not to trust him, to admit him, a foreigner, into their homes and communities. The question of sincerity in writing obviously resonates with the practices of the Objectivists, and with Louis Zukofsky, Charles Reznikoff, and George Oppen in particular. One of the contemporary practitioners in whom I discover my own senses of sincerity is Eléna Rivera, whose poetry consistency teaches me about the craft and the poet’s relationship to a world of others.

Partly what I believe has made Rivera’s work so sincere is her practice of translation, for which she was recently awarded the prestigious Robert Fagles prize for her translation of Bernard Noel’s The Rest of the Voyage. Even though I am not myself a translator, from what I understand of the task of the translator it is to attend to the idiom of a particular language and make it correspond with another. To translate is a test of sincerity in Zukofsky’s sense, because it is a matter of allowing languages to exist in such a way that the nouns and other parts of speech do not “do violence to their individual intact natures.” Likewise, to translate is to see words as objects in their social and cultural contexts, and to try to convey this context, to bear it across, to another cultural location.

I get the sense of Rivera’s work as a poet-translator when I read her poetry, which always has a certain air of care about it.
The feel of Rivera’s work, is that is has been fashioned by a poet-phenomenologist too, wherein words and worlds relate each other, and disclosure is an endless goal amidst a goalless enterprise. In this work, sensuous and nonsensuous experience, perceptual and reading experiences coalesce. We come to expect quotes around all the words, though there are only quotes around the few and only a few are cited. Conscience insists where we encounter an “I” in bare expressionism. Violence ruptures, as in Oppen’s poem “Power, the Enchanted World,” “at a thousand holes.” Which is to say, violence is ubiquitous, dispersed and effervescent, and our participation in it a constant preoccupation of Rivera’s.

I can trace this preoccupation as far back as Rivera’s first book, Wale, the title of which refers both to the side of a ship, to part of a weave, and to scar tissue; a perfect analogy for Rivera’s writing process, which makes visible genealogies of violence through a synthesis of different languages and modes of experience. One can trace this preoccupation most recently in Rivera’s electronic chapbook with Little Red Leaves editions, Remembrance of Things Plastic, perhaps her most autobiographical, if not ‘personal’, to date. In the brief poems of Remembrance of Things Plastic one discovers a series of short poems addressing cultural violence, and specifically the violence of becoming woman, which is to say, becoming acculturated to a female engenderment.

These poems, unlike Rivera’s other poems which oftentimes are moody, impressionistic, even mystical, would seem to have little to hide. All that hides their content is the historical and personal specificity of their situations of address, which would seem to evoke moments from Rivera’s childhood and adolescence. Rivera’s encounters with cultural violence also take place through her recent sonnet series, in which the fate of others determines a convoluted, twisting syntax, such as in the following poem previously published in The Nation:

When a man is asked to sing of his anger
the risk is that without remorse virtue dies
War then is in the face, in this homelessness,
the despair which couldn’t wait couldn’t ask for

We don’t talk to each other anymore we
email global reach managed minutes morning
to noon in the hospitals we are all old
forbidden to talk of lost sons, asked to smile

Enough, they’ll hear the news, men in photographs
die and nothing will seem simple, their faces
especially where sorrow stretched everything

Maps point to? and defeat looms where? out there where?
Here the naked body is where terror lies
Guilt builds monuments, the way we spend our time

In its care, in its embrace of vulnerability, processural adventure, and sincere modes of address, I have listened to Rivera’s work and continue to learn from it. Please welcome her now to EOAGH’s series celebrating Little Red Leaves editions e-books.
Posted by Thom Donovan at 9:55 PM No comments:

Thanks, Brent for these lovely words about ON Contemporary Practice. We are hoping to get started on the 3rd issue soon!

"Some will say the structure of this magazine, where poets talk about the work of poets, will only add to the feeling that experimental poetry is a small coterie with a secret knock to get in. Others, including me, find ON to be just what was lacking, and will find it far less about in-group backslapping than one might presume (very much like the Attention Span project, which has a lot in common with ON). Coterie is a sword of the two-edged variety, and ON is a much needed venue for poets to not only talk about works by their contemporaries but to fashion a renewed sense of basic, shared critical values."--Brent Cunningham at Attention Span
Posted by Thom Donovan at 9:51 PM No comments: