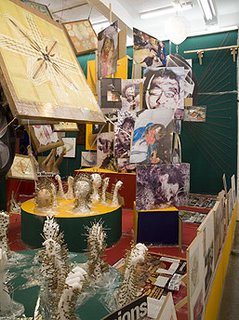 Art is higher than reality, and has no direct relation to reality. Between the physical sphere and the ethereal sphere there is a frontier where our senses stop functioning. Nevertheless, the ether penetrates the physical sphere and acts upon it. Thus the spiritual penetrates the real. But for our senses these are two different things—the spiritual and the material. To approach the spiritual in art, one will make as little use as possible of reality, because reality is opposed to the spiritual. Thus the use of elementary forms is logically accounted for. These forms being abstract, we find ourselves in the presence of an abstract art.
--Piet Mondrian, from Art and Reality

To go deeply into something, I first must begin with the surface. The truth of things, its own logic, is reflected on the surface.
--Thomas Hirschhorn, from the press release for Superficial Engagement

1. As of flatness: a devotion
Return to Matt Ronay’s comment at PS1 this past December: that death is our lasting sexuality after Iraq and 9/11. Is trauma then totally interiorized, left, as we are, to the horrors of the imaginary inside and without, to an inwardly imagination converting terror to terror, and terror also to love (cruel or otherwise)? Loving only the mutilations of the Universal, the whole “human war,” our slogan may be a prophetic one of the imagination’s call: “to heal or to war.” A mystical slogan no doubt, however one not finally against beautiful rationalizations or the affections of reason.

If, as Hirschhorn says in the Gladstone press release for Superficial Engagement (hereafter: SE), the only way to go “deeper” (to assume truth as depth) is to spend more time with “surfaces” – to seek truth in the horizontality of a total surface which becomes, given time and attention, a depth in truthfulness (a truth of the false or simulacral: the truth that horizontality, too, can bear witness) we are in the thick of the thick (the thick of a thickness intensified in spreading). “We” (those of us who attended Thomas Hirschhorn’s recent show) remain in the throes of a directness, an immediacy perhaps: direct actions, direct communications, a "too-much" of presentation; the directness of Punk/D.I.Y. ethos, of Constructivist “anti-aestheticism,” and of war’s total, mediatized face – for all to see (or miss in seeing the all). To pixellate (post-Video and long past transcendentalist Abstraction, Mondrian, etc.) is also to flatten. Pursuing this truth in flatness, the grainy truth; the truth of photographic circles of confusion or low res. internet printouts and Xeroxes set into more or (decidedly) less global circulation.

As of flatness looms Mondrian and other Modernists for Hirschhorn. Benjamin Buchloh recognizes in the artist the inheritance of an attempt to posit the art object in its formal purity (and thus “reality”) in order to transcend the particular subject both as author (artist) and receptionist (viewer): to de-identify through Abstraction towards Theosophical-utopian resorts (Mondrian of course holding dear his copies of Madame Blavatsky and Rudolf Steiner; Hirschhorn Mondrian and other Modernists, including, most recently, the “healer” and draughtsman, Emma Kunz, and “color-musician,” Richard Land). But there is another flatness (or a complementary one) that the artist cannot help but negotiate. A “flatness,” “frontality,” “iconicity” of the art object directly presenting, if not communicating, a series of signs as facts, a telepathy or psycho-kinesis of facts if you will… --this art which refuses to aestheticize its political effectiveness (and is hence typically Modernist in its negativity), and when it does forsake this effectiveness does so towards a critique or deconstruction of aesthetic categories and "tastes".

What could be more directly communicating of revolting signs than a severed head, or a barely recognizable human body standing in a pool of blood; what more than a host of texts lifted from various prominent (and not so prominent) media sources… hanging together, a sublime mess, through Hirschhorn’s signature materials: packaging and other common household tapes, nails, screws, cardboard boxes – a detritus of loose and timely material adhering? And this directness (for lack of a better term), a directness so apparently lacking from mainstream political discourse (or art for that matter) is affective, which is to say an emotional thing striking at the heart of the gallery goer, the goer moralizing (and yet in perfect ambivalence about the purpose of art as an instrument of “Moralism” or “sublimation”) before the propinquities and adjacencies of the artist’s “mess”. A mess determinate, yet irresolvable, if to resolve is to terminate any means of productive emotional and critical response, an engagement anything but superficial.

Such an affectivity, that Hirschhorn has produced an affective environment beyond mere “installation,” may account for the fact that everyone has a reaction to his work (whatever which way they are moved). I have certainly found this to be the case in other reviews and in conversations with friends and total strangers about Hirschhorn, including many whose first encounter with the artist’s work was his most recent showing.

The artist is, then, neither a mirror to reflect the world in which she lives, nor a hammer with which to smash said mirror, so much as the bearer of common and extraordinary problems (common problems, then again, often being the most extraordinary) of culture at its most extreme points of pressure, and of the ambivalences these plays of pressure produce irresolvable beyond their presentation. Which is to say, Hirschhorn is valuable to me insofar as his work produces an irreducibility of imponderables. And that these imponderables demand response at the limit where thoughts become feeling (affect) and feeling thought (in between them remaining, perhaps, a profound emptiness; the space in which thought as feeling actively occurs, is born out). As much as ever (and after the 80’s hegemony of critical theory, whereby theory could only stand to frustrate or, worse yet, moralize aesthetic actions) we need the arduous messes of artists such as Hirschhorn. 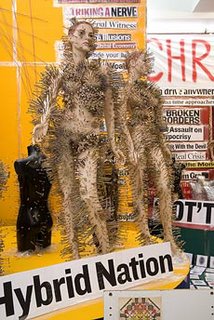 Posted by Thom Donovan at 11:50 PM No comments: