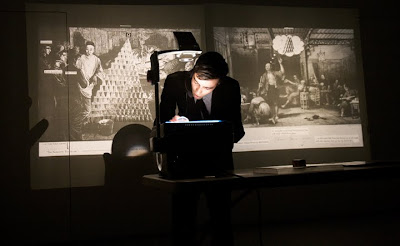 Here is the second installment of my journal for the 09 Performa biennial, at BOMBsite. It features coverage of performances by Alexandre Singh, Omer Fast, Shana Moulton, and Tan Lin.

"Had Singh’s performance been shorter, I think it would have been more palatable. However, I also understand that time was a crucial aspect of the piece. How long can one sustain telling a story? (Scheherazade of The Arabian Nights, the archetypal storyteller, did so for a thousand and one nights in order to save her neck.) How can one pleat the discrete elements of a story in such a way that narrative strands and characters return after long tropes, detours, and hiatuses? How does storytelling embody an act of mind—both of remembering and imagining—that gets an audience to think about how they are processing something being heard and made-up in their own minds separate from the storyteller?

These are some questions I think may be important to ask after Singh’s performance, but also after a performance I saw later in the week, Omer Fast’s Performa commissioned “Talk Show.” ”Talk Show,” like Singh’s stories, takes up storytelling as a practice, and as a problem of cognitive-phenomenological investigation. Only while Singh was more concerned to investigate storytelling as an art of construction—of assembling disparate elements and making them hang together in one’s attention—Fast’s piece was concerned with storytelling as an art of transmissability—handing-down and bearing across cultural information."
Posted by Thom Donovan at 12:32 PM No comments: 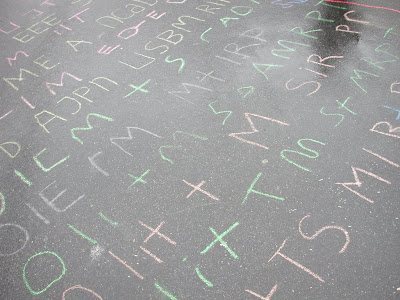 Check out over 400 pics of Tan Lin's chalk playground performance this past weekend here. My write-up of the event is forthcoming hopefully later today.
Posted by Thom Donovan at 11:53 AM No comments:

If you are in Philly next Tuesday (Nov. 24th) come hear me read with Julian Brolaski at the Kelly Writer's House on the UPenn campus. Details here.

Thanks to Julia Bloch, Sarah Dowling, and Jason Zuzga for inviting me!
Posted by Thom Donovan at 11:06 AM No comments: