Such good company to have been included among here!
Posted by Thom Donovan at 1:12 PM No comments: 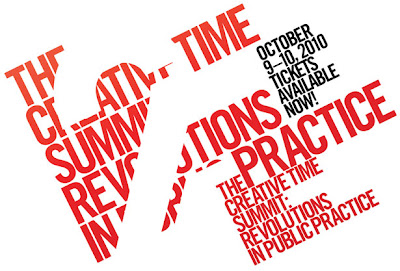 "The third presenter, Bruce High Quality Foundation (BHQF), reappropriated a text by painter Ad Reinhardt about the function of art, using it to present an institutional critique of art world problems and dynamics in regards to the history of the “art school.” This is the fifth time that I’ve encountered BHQF, and each time I’ve seen them, I have had a similar sense that their work is an elaborate hoax intended to express ambivalences and ironies around art’s marketplace and institutions. In this regard, I felt BHQF was miscast with the other panelists who, through their work, have attempted to have a direct impact on how education functions within communities and as a forum for radical socio-political content. In his talk, Jakobsen alluded to a retrograde movement away from the “educational turn” among artists in the 1990s and 2000s. BHQF’s lack of transparency during their presentation (had Creative Time’s curator Nato Thompson not mentioned the organization’s funding of the group, it probably would not have become known to the audience), and their unqualified use of the term “free” (a kind of open signifier during the group’s presentation), made me question the group’s intentions. That BHQF have recently presented work at P.S.1’s Greater New York Show (a pedestal “exchange program”), the Whitney Biennial (an ambulance with video projected inside it about American media representations since the 80s), and have shown work in a prominent Chelsea gallery (an installation of progressive education artifacts such as a paperback of John Dewey’s Art and Education and chalk boards reminiscent of Joseph Beuys’s lecture performances) makes me wonder how they wish to make use of the radical format of the free school."
Posted by Thom Donovan at 12:50 PM No comments:

Please join us for the launch of two new books in the LRL e-editions series: Everything We Could Ask For, by Sarah Campbell, and Remembrance of Things Plastic, by Eléna Rivera.

On EVERYTHING WE COULD ASK FOR
In this second collection, Campbell's richly minimal poems come once again, as poet Zack Finch has written, "sieved out of turbulence," pressed to the point that each syllable counts out from the unaccounted. In sparse and reflective lines, Campbell's poems move with an understated plangency--turning the volume up at the edges of ordinary speech.
http://littleredleaves.com/ebooks/Sarah_Campbell.html

On REMEMBRANCE OF THINGS PLASTIC
In Remembrance of Things Plastic, Eléna Rivera charts a path between cultural displacement and the hyper-pull of consumer images. Migrating from the strictures of girlhood ("Marooned in a room the size of a dollhouse") through the acculturation implicit in Garbo's eyebrows, Rivera laments the social split between self-hood and the feminine body--the insurgent exchange of the personal for plastic that accompanies American adolescence. Through these small remembrances, Rivera recalls the isolation of one between objects: "I was given a shiny plastic yellow ring-shaped radio," she writes, "with a twist; you could twist it open and hold it up to your ear like a phone."
http://littleredleaves.com/ebooks/Elena_Rivera.html

Sarah Campbell studied in the Poetics Program in Buffalo, NY for many years and now lives in Brooklyn.

Eléna Rivera is the author of Remembrance of Things Plastic (LRL e-editions, 2010) Mistakes, Accidents and the Want of Liberty (Barque Press, 2006), Suggestions at Every Turn (Seeing Eye Books, 2005), and the translator of Secret of Breath (Burning Deck Press, 2009) poems by Isabelle Baladine Howald. She was awarded a 2010 National Endowment for the Arts Literature Fellowship in Translation and a 2009 Fundacíon Valparaíso Poetry Residency in Mojácar, Spain. She lives in New York City.

COMING UP NEXT IN THE EOAGH READING SERIES:

Fuels "the system" scratch that
Since resistance is part

Of an organum of control
A matrix of complicities

Stop the world simply let
It be useless, let be the silence

Of a different effort
Sing that it is elsewhere unframed

That conscience and com-
punction are a kind of form

The efficacies of its being for us,
Not an unspeaking thing.
Posted by Thom Donovan at 5:19 PM No comments:

Summons that we feeling
Certain things made
Gathering as a kind of making
An active question that storms our thinking
Called world, how we do
How we no longer called this us
When a name was true
We lost our names
When loss was useful


The new us starts from a dish
Not socialism, continues to grow
Sans system, an attention
To this consumption system, a local
Kissing of totality what will be value
And what's the use, in poking
Our heads out, food sovereignties
Produce this singularity


The new us, the new good life
Well being as muse and health
As wealth all we are saying's
The all new thing, new expression
Being shares this sense, of turning
Around a land, or land fills
Me up with emergence, political
Like a dish, we cannot help,
Gathering around, or con/tem/plating.
Posted by Thom Donovan at 4:38 PM No comments: