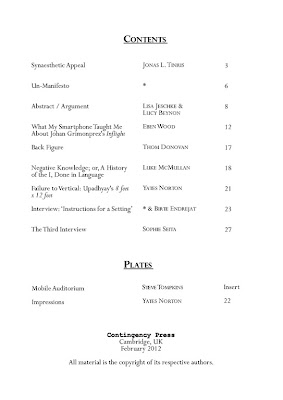 Thanks for including me in *, Luke McMullan and Sophie Seita. A brilliant new journal!
Posted by Thom Donovan at 12:13 AM No comments:

Someplace other than what he read (@ J2)

Here is a little write-up I did about David Buuck's performance this past weekend at the Bowery Poetry Club, for Segue Series.

"As David also commented to me afterward during an extensive conversation about his involvement in the Oakland occupation, where his performance may have seemed to attempt to reenact scenes from the occupation, it instead foregrounded the impossibility of successful reenactment, the bodies that produced its context being withdrawn from us, the social conditions that produced that context someplace other than what he read and the video he showed. It reminded me of something Adorno says in Aesthetic Theory, that we reenact what could not be felt the first time around. Through his use of bodily and textual constraint, and through tactical remediation and recontextualization, David touches an affective content that we might otherwise not feel through the representation of political and social traumas, traumas which for many have become deeply personal through their involvement with the occupy movement."
Posted by Thom Donovan at 11:05 AM No comments: