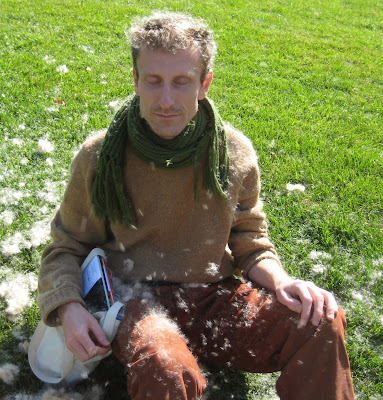 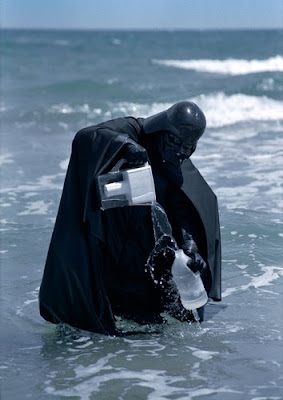 Darth Vader Tries to Clean the Black Sea With Brita Filter
by Daniel Bozhkov
Posted by Thom Donovan at 11:07 AM 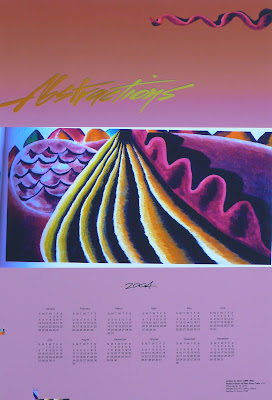 Here's an ad for Seth Price's video lecture, Redistribution, now at EAI Video Project Space (more info below), plus a link to a piece Tan Lin wrote for Artforum on the Redistribution project via Price's 2007 performance with others at the Kitchen, "Freelance Stenographer."

EAI is pleased to feature the latest iteration of Seth Price's new video, Redistribution, at the EAI Video Project Space at X.

Redistribution, begun in 2007 and conceived as a never-finished, constantly updated work, takes up a Guggenheim 'artist's talk' delivered by Price only to pull it apart, reassemble it and graft new material to it, resulting in an open-form hybrid. Equal parts lecture, performance, and essay-film in the caméra-stylo tradition, the work oscillates between fiction and non-fiction, information and entertainment: an exposition as well as an artwork in its own right. Originally made for presentation within the context of Price's art exhibitions, EAI presents the 45-minute video by itself, without Price's artwork around it.

In a conceptual, multi-disciplinary art practice that includes video, sculpture, sound, and written texts, Price engages in strategies of appropriation, recirculation and packaging to consider issues of cultural production, the distribution of information, and the role of ideology. Shifting and manipulating the detritus of commodity culture, his projects have included early sampler-based academic music, anonymous Internet-circulated video, and art historical imagery. Investigating the cultures generated and re-circulated by mass media technologies and information systems, Price ultimately questions the production and dissemination of art and meaning itself.
Posted by Thom Donovan at 1:42 PM

"I have visited her eyes"

I have been trying to write on Bhanu Kapil's poetics since the winter now, and am currently making another go at it for the upcoming issue of ON. Frequenting her blog lately, I came across this beautiful passage last night, from an April 16th, 2009 post entitled "Rain":

"I loved being in a transpersonal classroom. As if that wasn't enough, the next speaker was Elizabeth Lonzano, a Colombian scholar specializing in global feminism and strategies of non-violence. Setting up her power point presentation, she put on some music and said: "This music just wants to make me burst out dancing. I don't know if I'm going to be able to help myself from bursting." It is hard to explain how alive this person was. Who then spoke on her work as an international witness in the peace community of St. Jose de Apartado, where the people who live there resist, through non-violent means, the "killing, rekilling, and superkilling" that have dominated life in their country since the massacres of the 1940s.

Territory/terror: "It's not just that we're going to kill you, we're going to tell you we're going to kill you first. Then, we're going to cut your body into little pieces, because we know that your body is sacred to you, that it represents the earth, and your relationship to the earth, who is like a mother to you." These were Elizabeth's expressions, describing what it's like there every day, the domination of corporate paramilitary and military alliances, and how an act of resistance might look like this: if someone is killed, beheaded, their body chopped up with a machete, the entire village "goes into the jungle, looking for the pieces of the body, and then they bring them back. It's a celebration, it's saying, this blood is life, it's spilled into the earth, and now we've gathered the body and we'll bury it rejoicing that from this life is going to come so much growth." A "symbolic burial." Integrated power versus the power that comes from threat, in peace studies discourse. She described a man who met a paramilitary soldier in the jungle, on a small path, and when the soldier began to tell him, I'm going to kill you, this is what is about to happen to you, I'm going to cut your arm off and then...the man said: "It is not in your power to kill me. You can kill me, but the order is not coming from you. It's coming from God. God has given that order. I follow God's orders, and so do you."

Tell me what you know about dismemberment. As Elizabeth was speaking, speaking about body, jungle/ground and divine feminine as linked by the cellular matter of blood, the blood a kind of milk, I thought of the goddess Parvati, killed by her father and left on the ground. Shiva, her lover, found her and slung her body around his neck. He sat in kind of ruined trance for a long time until one day, unable to tolerate the pain of having lost her any longer, he stood up and flung the pieces of her body to each direction. So that, in modern India, to recreate the body of the goddess, to make that body whole again and to integrate it (through the physical effort of pilgrimage, through meditation, through opening yourself to the vibration of place) with yours, you go, in a lifetime, to all the places -- in India, Pakistan, Nepal and Tibet -- where the parts of her fell. Vulture Peak is where her ear is, I think. In Kolkata: her eye. Her big toe. And so on. I have visited her eyes, her ears, her tongue and her heart. My blood ties flood me, sometimes, and I want to go to where her stomach is, and her nose.

Elizabeth: "Do me a favor. Don't drink Coca Cola ever again. Don't eat Chiquita bananas. Whatever you do, don't eat a Chiquita banana. If you want to support peace and non-violence in Colombia, don't drink that coke.""
--Bhanu Kapil
Posted by Thom Donovan at 12:10 PM