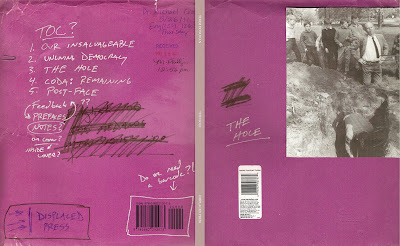 My "first book," The Hole, just dropped at SPD.

But it is really not my book. Or it is only nominally "my book." Because I was so very fortunate to be able to include many incredible contributions from others, solicited responses to an earlier version of the book. And these responses issue from a spirit of collaboration and community endeavor and friendship, which I consider to be the condition of the book's making, from start to finish.

Here are some excerpts:

25 hedge fund managers
are worth 658,000 teachers.
This is just minutes before
totality occurred.
--Andrew Levy

What comes out is an idiolect. When one has an intimate (perhaps ‘intrinsic’) relationship to language the first thing that becomes apparent is our inseparability. It’s not even a paradox. Particularly when the dominant language is hegemonic or oppressive, we need to break from the connectivity and open into the one subsistence we are. We recognize each other because we share recognition (and because “our suffering is beyond conceptualization”). The initial state of language (which, like eternity, if it is not ‘now’, it is not) is first-person-plural. We need a science of the first person plural and it’s only fair that the first discussions for such a science would be ‘lyric’. The Hole. The hoax being accomplished against us (well-described in Thom’s manuscript) is happening by means of language. We need a hole dug as big as the world. It really is the original story: to salvage the world with that with which we screw it up.
--Robert Kocik

Thom Donovan’s The Hole is a protest song, an unmuffled cry. His caring is a direct response to the glaring irony of ablest-fatalism. “How are you I’m tortured.” Pain is the body’s form of protest. Pain sends messengers to the site of trauma in order for healing to occur. No recourse or healing until pain is felt (especially so in fucked-up scenarios—no acknowledgement of suffering: sociopathy as societal norm). […] The Hole turbulently narrates and embodies localized and social pain as it endeavors to exit out of the critique of what remains.
--Brenda Iijima

[…] being at the joint of flex. More than. Once with you at poetry's I mean Poetry's admission of guilt for having been.
--CA Conrad

this poem and a few maybe with it […] must be read in streets, in public gatherings, pubs and cafés, on t.v. […] it's up to us to bring words to those to whom they belong
--Etel Adnan

what of ourselves we put in
the possible

a once that never was
--Jane Sprague

The words invite that gift of night. We move in tandem at times, we who say no, the aversive, a kindred ally, the stubborn immobility, silent potent, an obstinate night’s nothing, whose no unites, disrobes, finds flesh, interrogates the state, of language, of making, and of war, unmakes and disarticulates night’s night, all that everyone has worked for, forces, to which we say no, the subjects who say no, made visible in your ongoing engagement within space.
--Jocelyn Saidenberg

Within the measures of Thom’s project, disaster can’t be seen, nor can it be experienced, and yet disaster hails the lyric subject into social being, commanding the ear, while enjoining the poem to bear witness to that which can’t be witnessed. The disaster can be thought of here as a kind of event: like a hole shot thru perception and around which feeling struggles to hear itself as thought, or a void where a social situation’s structuring antagonisms concentrate invisibly. This triangulation with the eventful disaster threatens to render the poem impossible, but what makes Thom’s writing critical is the way it refuses the convenient alibi that the poem’s disastrous impossibility is a fateful condition of language itself (as Blanchot might think). The poem rather risks its impossibility on social catastrophes where it is unbearably implicated.
--Rob Halpern

Epigraph
and/or
citation
upload a text into a virtual community of intellectual propriety. Elsewhere—not “here”—is confusion. E-volition as a peculiar instantiation of cultural labor apes evolution, expels, from a deflated coterie, product by-product toward a putative public.
--Tyrone Williams

What wind blows through me
Oh that it might carry me

In peril, fatherless and worn
In danger, because I have given everything up
--Dorothea Lasky

I also started to think a lot about scandal in relation to your writing, & draw up some warp & woof in my mind between the word 'scandal' & 'disaster', words just so electrified in this moment, & 'scandal' you know, it has this air of sexiness about it, it implies a secret carnality somewhere out of sight, & I think you[r] book enacts that heat, that sort of starvation, against & through the actual processes of depravation that order the figures of our despair; ecological disaster, political aporia, the half-heartedness that meets them, the bodies & speech both effaced & replenished in prosodic attention, The Hole became for me something scandalous, a rumor (like Rob's Rumored Place), something repellent & absorbing that's transmitted through the glamour of our being together, like the world as it is the dirty non-secret we keep passing off to one another […]
--Dana Ward
Posted by Thom Donovan at 9:14 PM No comments: