Here is an audio recording of a reading I gave from "Ressentiment," the second part of my ongoing anti-memoir, Left Melancholy, at Segue last April.

https://www.mixcloud.com/SegueReadingSeries/thom-donovan-for-segue-reading-series-041517/
Posted by Thom Donovan at 12:17 PM No comments:

MEATYARD, MY NEIGHBOR for Pre-order at Apport Editions 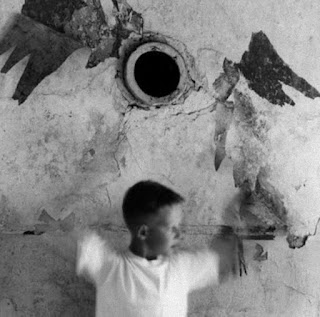 Originally intended as the beginning of a collaboration with another writer, Meatyard, My Neighbor was composed when I first arrived in Manhattan in the fall of 2005, and has been edited and worked over many different times in the past decade, often as part of unpublished poetry manuscripts. During that time I was steeped in the work of the Lebanese writer and artist Jalal Toufic and his many theoretical and aesthetic reference points that I shared an interest in, including the Kentuckian photographer, Ralph Eugene Meatyard. Meatyard’s work appealed to me since it seemed to use photography as a means of visualizing the metaphysical, therefore making the ‘otherworldly’ available through an ensemble of “aesthetic facts” (Toufic’s phrase). Like other poems I was writing during this time, it also became a way of mediating—albeit obliquely—ongoing geo/political crises, such as the USAmerican wars in the Middle East, and widespread racism against Arab subjects. Much of the poem is ekphrastic—a relationship anyone can see who is familiar with Meatyard’s photographs—but with something else in the mix both highly speculative and oddly New York Schoolish (see Hannah Weiner’s The Magritte Poems, for instance) in excess of the verbal description of works of visual art (ekphrasis). Like other poems I was writing in the mid-2000s, it also embodied a melancholy attempt to understand my encounters with the world as a Bardo or state of transmigration. Since the poem has been in a transmigratory state itself for quite some time now, I’m relieved that it has finally found rest in print. –Thom Donovan, 11/2017
Posted by Thom Donovan at 5:24 PM No comments: