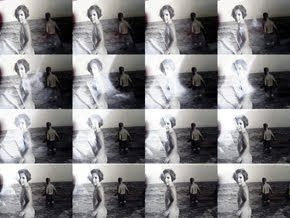 Thom Donovan and Sreshta Rit Premnath, at the invitation of Museo magazine, will interview Svetlana Boym and Matthew Buckingham about the potential of unrealized futures.

Svetlana Boym's theorizing of "Nostalgia" and the "Off Modern" and Matthew Buckingham's re-engagement of forgotten histories are apt points of departure for what they are calling an Archive of the Future Anterior.

With these interviews Donovan and Premnath introduce their video project in which artists, writers, scientists, and colleagues from various disciplines discuss unrealized social and/or personal projects. By producing an archive of futures which have yet to come to pass perhaps it is possible to alter the course of the future, as well as change the way we narrate and remember the past.

"The tense of the future anterior (French: Future auxiliary verb + past participle) is one of potentiality. Within any given present, it images what will have been before an event actually comes to pass. To return to the moments of bifurcation is an objective of our Archive of the Future Anterior. An archive which wishes to serve less as a time-capsule than a provisional index of loss or misplaced futures; where future has not yet become past and multiple futures remain compossible within a single present."

--from Proposal for An Archive of the Future Anterior

Sreshta Rit Premnath lives and works in New York City. He is an artist, curator and founder and editor of the magazine Shifter. He received his MFA from The Milton Avery Graduate School of Fine Art at Bard College and was a 2008 studio fellow at The Whitney Independent Study Program.

Svetlana Boym is a writer, theorist, and media artist who leads parallel lives. She has participated in numerous media exhibits and is the author of several books, also contributing to journals such as Artforum, ArtMargins, Cabinet, Punto de Vista, Critical Inquiry, Representations, Poetics Today, and Harpers’s Magazine. Boym teaches in Comparative Literature at Harvard University and is an Associate of the Graduate School of Design. Native of St. Petersburg, Russia, she now lives and works in Cambridge, MA.

Matthew Buckingham is a New York-based artist who utilizes photography, film, video, audio, writing, and drawing to question the role social memory plays in contemporary life. Buckingham’s work has been shown at numerous institutions around the world, including The Museum of Modern Art, New York; the Moderna Museet, Stockholm; and the Corcoran Gallery of Art, Washington, DC, among several others. Buckingham received his B.A. in film production and film studies from the University of Iowa in 1988, and in 1996 he completed an M.F.A. at Bard College. In 2003 he was awarded a Deutscher Akademischer Austausch Dienst (German Academic Exchange Service), and in 2004 he was awarded a Henry and Natalie Freund Teaching Fellowship at the Washington University School of Art, St. Louis. Buckingham also serves as an external tutor at the Art Academy in Malmö, Sweden.

All events are free and open to the public.