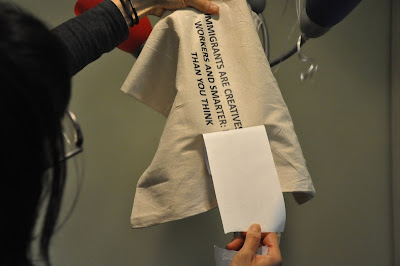 Check out the feature I did at Art21 blog with Cuban artist, Tania Bruguera, practitioner of Behavior Art and Useful Art and organizer of Immigrant Movement International, based in Corono, Queens:

While I practice that expanded version of aesthetics, my work is about the role of the artist in society and the possibilities for art to be directly involved in social endeavors. In order to get involved in social issues, it is important to truly commit to real action. The challenge is that artists are very often confronted with the institutional wall. So the work gets caught between a sort of hyperrealism and representationalism that affects the expectation of the artist, but also the ways in which the institutions are ready, or in some cases not, to deal with this kind of work. It is the old dilemma of responsibility in art and what the people in the institutions think the artist should be doing. Unavoidably the work starts dialoguing from an institutional critique standpoint. A new institutional critique where we do not wait for the institution, but we become “institution builders.” Sometimes within the inside of an already existing institution; other times ignoring them, so they have to catch up. It is positive institutional critique.
--Tania Bruguera
Posted by Thom Donovan at 12:58 PM No comments:

Here's a little statement I wrote for Harriet, on the "emergence of the subject" through poetry and art:

After the armor has been forcibly removed by an adversary, after one has become vulnerable to attack — this is the moment when the “real” subject would seem to emerge, or at least a subject with more reality than it previously had. This subject is both more collective and more singular paradoxically, for it having given itself to a relationship of combativeness. What remains is something between what it was before that having become vulnerable to attack, and the armor scattered around it afterwards. Perhaps the art object or poem is the residue or remains of this event? This is at least something my book-to-come is attempting to explore.
Posted by Thom Donovan at 12:42 AM No comments:

If there were some rainbow at the end of a truncheon. Coerce the crowd and call it art. Call it organization, set the museum adrift. A horse shits on the shiny floor. The voice of the police forms into a voice again. Visual quotations of that commons we’ve never been. If there were some rainbow in those words "crowd control." The voice of the father like a reign machine. In the 30s in the 60s in the 90s. Before we could represent as art the things that were being done to us/that we participated in/that we were doing. Left over from some rainbow, the blood of some truncheon, some whip.
Posted by Thom Donovan at 2:03 PM No comments:

Here is a little questionnaire I generated for a collaboration I am working on with Rob Halpern, as yet untitled. On commons/commoning...
Posted by Thom Donovan at 11:53 AM No comments: