David Wolach on WHOF @ 5, state of the blog, and alternatives to Facebook

Here is a David Wolach's very thoughtful response to my previous post. Thanks for the camaraderie and conversation, David!
Posted by Thom Donovan at 7:07 PM No comments:

"To come down by a movement in which gravity plays no part. [...] Gravity makes things come down, wings make them rise: what wings raised to the second power can make things come down without weight?" -- Simone Weil

Since October 28th of this month (tomorrow) is the fifth year anniversary of Wild Horses Of Fire, I thought I would mark the occasion by reflecting briefly on what the blog might have offered me as a form(at), and the possibilities and potential which it may still be able to make active.

When I began posting at Wild Horses Of Fire, it was mostly to keep in touch with a community that I had left behind and that I sorely felt the absence of. Namely, the students, friends, mentors, and colleagues with whom I lived and worked in Buffalo, NY for five years. To blog was to commune almost exclusively with people who I was separated from geographically across the distance of an eight hour car ride/two hour flight.

Before long, WHOF took on unexpected aspects and qualities. Namely, it became a kind of 'open notebook' or 'studio' where I could compose materials and organize them as I was working with them. A lot of posts from the first years include quotations which I would eventually use as epigraphs and for inclusion within the tissue of poems and critical writings. These posts also include poems that I was working on or towards (through a process).

WHOF took on a different character as I started to make connections with more people in New York City and elsewhere. It became a space where I felt I was defining a set of relationships, where I could address the work of my peers and contemporaries and comment on what was happening 'around' us. A lot of the materials from these years also consisted of ads for reading series, events, and shows, as well as links to content having to do with cultural politics, education, and visual art in particular.

The emergence of Facebook changed the way I was using WHOF as an open notebook and communication/distribution tool. I'm still not sure if this change is totally a negative thing, and don't want to rule out what may be radical about the potential of Facebook as a tool for 'networking', communication, and composition (why, I wonder sometimes, aren't more writers and artists using social networking platforms as a form for their practices?).

I don't lament that the blog has been eclipsed by Facebook, yet prefer what a blog can offer curatorially and as an "attention span" (to nod to Steve Evans's ongoing blog). Mainly, I regard the blog as a space for feedback, and as a potential space for dialogues and exchanges that can become readily visible and publicly accessible. With so many property and privacy issues on Facebook, it is difficult to conceive the currently hegemonic social networking platform in such porous and expansive ways.

How has the blog come to be used as a poetic or aesthetic texture, I wonder after the tradition of the 'long poem' and composition by book (Spicer). To what extent is the blog like and not like a book book? To what extent should or could the blog function analogically--beyond the digital format, translated into print? So often we think about the conversion of print to online, but very rarely in the opposite direction. To what extent do group or collective blogs remain inadequately explored, with the exquisite exception of Laura Moriarty's A Tonalist, which gathers no less than ten Bay Area Writers, and which is now published (in some form) as a book? To what extent is the blog devoted to essays, reviews, interviews, and other critical content pertaining to poetics also inadequately explored. Many models of this critical behavior remain linked at the Electronic Poetry Center and Harriet, though many are also fairly inactive today, if active at all. What would it take to network differently than the ways we have consented to network through Facebook? Facebook is a tremendously amnesiac format, thus inadequate as an archive. How to explore the blog (again) alongside websites and other virtual sites for content as both an archive and distribution device? How can the blog (or alternative social networking technology) provide a space for enhanced participation, discourse, and socio-political engagement? How can it present heterogenous archives for public intellectualism, aesthetic discourse, community and friendship?

I dedicate this post to Michael Cross who, eschewing Facebook altogether, has put much energy recently into his The Disinhibitor, a blog for emergent poetics in the 21st century. It is also dedicated to my many contemporaries still exploring gathering alternatives on the Internet and elsewhere...
Posted by Thom Donovan at 8:19 PM 3 comments: 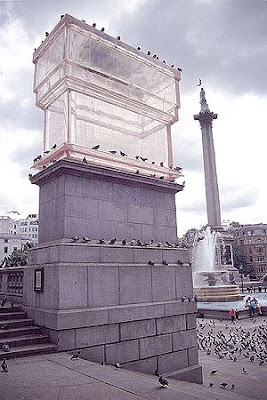 A course of law could stand
No earth nor other
Orders of being
Crowned by its waste.
Posted by Thom Donovan at 11:33 PM No comments: