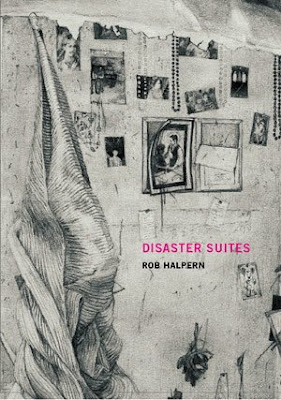 I have been enjoying Brandon Brown's conversational blog, HI, which is ever breezy and yet concise (a rare quality in criticism). Here goes the longish entry, which you can also find here if you scroll down for awhile:

"1. Yes, I’ve been living with Rob Halpern’s Disaster Suites. There is so much to think about and so many various ways the conversation could go, but maybe I could just make some mentions.

For one thing, there is the fascinatingly fraught relationship with the lyric that’s both performed and discussed. In the prose piece which comes after the suites themselves, “Post Disaster,” Rob writes, “I hope these poems don’t persist. Or rather, I hope the conditions that make them readable do not.” This is shocking for the perhaps obvious reason that the lyric has always been obsessed with its own preservation. Catullus and Horace, to some degree typical of classical lyric practice, inscribed into their verses prayers that their works would endure. I read these sentences in Disaster Suites as the negative of those prayers. The “rather” is hopelessly, beautifully emblematic of the paradoxical desires and intentions that constitute so much of the text. How would you read an illegible work? Except, there is a way in which the world that makes such work illegible could then be read as bearing meaning. Or something like that.

There’s a terrific paradox in which what is to be desired is refusal itself, performed in the world No! One wants to say no to the disaster, no to the conditions that permeate and structure disaster. It’s a gorgeous affirmation of the desire to negate—but, viz. the last lines of the suites:

In words with no future we seek portals
Holes and faults hew new relations quicken
Chasing that persistent and ongoing no!

The meaning of the word “hew” and its use here really evokes Oppen for me, someone who I know is terribly important to Rob. To “hew” of course means to cut and to fashion. Like “render.” This chase after negation is critical for so many reasons: the “troika” of police, state, and capital demands obedience (framed as “yes”), the media representation around disaster is inevitably productive of, not resistant to, the disaster. The proliferation of imagery and analysis (Rob mentions the racialized distinction between “looting” and “finding” in post-Katrina coverage) is a sort of persistent and ongoing yes! to the disaster, etc.

There’s so much more to say—maybe there are things I’ll be able to say in the future (besides omfg stop reading fucking talking points and read this book), but I also think that this book demonstrates that uncanny relationship with the lyric in its form. I mean, this is so hard to talk about, so do you mind if quote:

There are like dozens of moments in this text where such formal stratifications are at play."
--Brandon Brown
Posted by Thom Donovan at 10:50 AM