In Robert Smithson's *Collected Writings* under the title, "A Cinematic Atopia," Smithson imagines a project for what I would like to call a "total process" or "autotelos"**. Smithson describes the project as such:

What I would like to do is build a cinema in a cave or an abandoned mine, and film the process of its construction. That film would be the only film shown in the cave. The projection booth would be made out of crude timbers, the screen carved out of a rock wall and painted white, the seats could be boulders. It would be a truly "underground" cinema.... (142)***

In Smithson's project for an "underground cinema," the work of art displays a total process insofar as it begins and ends with itself--spiralling in its own interstices, self-becoming perpetually--or, in Smithson's case at least, until the film breaks-down, the walls cave-in, entropy wins-out. The idea of a "total process" can be located across art works, and fields of production. I read it firstly in Herman Melville's *Moby Dick* where, besides being a late-Shakespearian allegory and reflection of American Imperialist exceptions, the book entails an encylopedic reference to the whaling industry at mid-19th century told by the book's narrator-documentarian--Ishmael--and the dialogue of the book's other characters.

Other cases that may be made for total process include Dziga Vertov's *Man With a Movie Camera*, where the film moves among frames of reality or "windows" (Lev Manovitch) in order to provide degrees of reflection for film reality. Here we have multiple (if not often combinatory) degrees of mediation. The first being the film itself (what the camera-consciousness sees without reflection); the second what is revealed of the film's making (editing, shooting, staging); the third reception (the audience within the film seeing the film); and the fourth reception of reception (us seeing ourselves seeing the audience seeing the film).

In Georges Franju's *Blood of the Beasts* and Stan Brakhage's *The Act of Seeing With One's Own Eyes* I observe comparable film forms for total process. Franju's film of course involves a recording (with sparse, accompanying voice-over narration) of Parisian slaughterhouses in the 1950's. In the film, the filmmaker shows various moments in the process of slaughter (the initial blows to the head with a pressure gun, desanguiation, dissection, skinning, hanging). Franju's motivations for making the film are not clear to me (Does he wish to sing a common labor practice, of "our daily bread"; best known for his horror film, *Eyes Without a Face*, does he rather wish to produce shock/terror in his audience through recording actual gore?) Perhaps the motivations (and effects) of this film are deliberately ambiguous.

Similarly, in Stan Brakahge's early 70's *The Act of Seeing With One's Own Eyes* (meaning *autopsy* in Latin), Brakhage records a human autopsy from start to finish. Where Franju's film is restrained in its camera movement, and uses dissolves and time-lapse cinematography to convey the transformation of the "beasts," Brakhage's film tends towards "real" or "lived" time--with edits only for breaks in the autopsy procedure. What has always struck me watching this film, and even showing it once to students, is how important Brakhage's use of "hand-held" is to lend his "Document period" reality and credence.**** That Brakhage trembles before his subject (and so also his camera) conveys a truth less of "the birth of the clinic" (Foucault), than of the individual envisioning-soul bearing witness to death in its purest immanence. 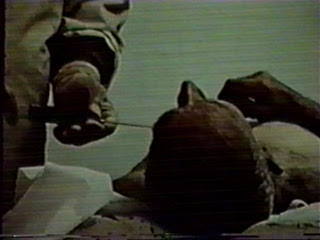 Another figure who I have considered for this project is Matthew Barney, whose works have fascinated me since I first saw *Cremaster 2* in 2000. Seeing *Drawing Restraint* this past fall (and thinking of Melville) I was reminded how much Barney is exemplary of total process in his use of "molds," his athletic procedures, as well as in the large-scale underakings of his works since *C2* (I can only imagine rental fees and/or legal permissions for use of the Chrysler Building and a Japanese whaling liner).

Whereas Melville or Franju seem put into the service of factuality, documentary and history (despite Franju's somewhat aestheticized narrative, and the deep mythological-allegorical underpinnings of Melville's text), Barney's work differs as a mytho-historicization of Capitalist postmodernity (the Guinness logo of *C3* occupying the same narrative space as CGI ogres and dwarves; Gary Gilmore & Houdini emblamatizing myths of Manifest Destiny & American antinomianism). In *DR* I am less interested by the fact that Barney is "Orientalizing" (a charge many have made against the film), than that he reveals the ultimate cultural mobility of his project. Whereas Barney's most substantial films preceding *DR* (*C2* and *C3*) draw upon American icons, motifs and locations to bear-out Barney's foremost problem of creative process and (self-)becoming, in *DR* these problems are graphed onto Japanese culture. *C2*, *C3* and *DR* are all appropriative & mythologizing, only the latter seems more awkward in this appropriation, less "appropriate" (...I think here of the tea ceremony, as well as the parade that inagurates the voyage of the whaling vessel).

Talking to Kevin Killian recently, he mentioned that Barney refers to his Vaseline molds as "self-lubricating". I had not heard this term before, but it confirmed what I already suspected about Barney: that he is *the* artist of total process/autotelos in our era insofar as his works begin and end with themselves, "self-lubriate," self-transform (think of Bjork and Barney chopping off their limbs at the conclusion of *DR*). The works are meta-historical in this respect. That is, unlike Franju, Melville or Vertov, Barney's works do not refer to a historicity beyond themselves, their processes. Though they employ figures from a popular cultural lanscape (Mailer et al), such figures remain iconic and mytholigically enactive. Yet history may interrupt meta-history in *CR3* and *DR* where I for one can not view the Chrysler building without thinking of the men and women who contributed to its making, and its prominence in the NYC skyline; nor can I can think of any whaling vessel nowadays without immediately imagining it being tracked by Greenpeace and other environmental agencies.

Whereas it has become fashionable in recent years to think of historical structures as containing a primordial element both constitutive and disrruptive of its subjects (e.g.: "The Real" or "traumatic kernel" of Zizek and other Lacanians), perhaps we should also be thinking about historicity as something that interrupts the primordial, mythological, meta-historical, interior and imaginal. In Barney, factuality interrupts a form for mythology and pseudo-ontology. However inadvertent, History is the angel that rushes in to save meta-history from itself. Facts depose mythopoetic enclosures, if only briefly. 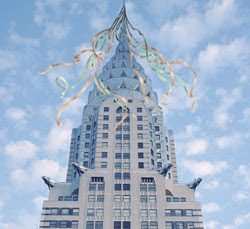 *a prospectus for Stacy Szymaszek's reincarnated *Gam*.
**thanks to Eliza Newman-Saul for drawing attention to this term.
***from The Collected Writings of Robert Smithson.
****see the 2002 Chicago Review special issue on Brakhage for elaboration of Brakhage's term "Document".
Posted by Thom Donovan at 10:25 AM

If history, defined by its factuality, its extra-aesthetic relevance, imposes (or, perhaps, presupposes?) on the “mythopoetic” seal of Barney’s films, is this interruption a violent break? What kind of interpretation does it bring to the closed and total world of the films? Does it make the films, despite themselves, allegories of their world (to use Jameson’s language)? Furthermore, where is history’s interruption located--in the text, in the spectator, in a collision or collusion of cinematic and extra-cinematic histories and horizons?

I haven’t seen _Drawing Restraint_ yet, but I can’t help but wonder if the awkwardness of “appropriation” in the film is not only cultural, but might also lie in pointing to the problem of labor and work itself. In the preview I saw for the film, the Japanese ship captain comments on one of Barney’s more practically insane spectacles, only to shrug it off with a kind of helpless indulgence, adding that he knows nothing about art. In this film, it seems, you have the art works, the artist at work, and those whose labor is more “everyday,” the traditional worker, for lack of a better term, at work, and possibly this work coincides and does not coincide?

This representation of work itself might be a point of strange resemblance with Vertov’s Soviet film. What you have in these frames is a reflection, for Vertov in _Kino-Eye_, of cinema as a productive labor of socialist society. What is produced? A new way of seeing? Social and aesthetic possibility represented by the trope, as Annette Michelson says, of revolution as a literal revolving, as of machine parts, as of the camera itself? Is this the “total process” as, paradoxically, a means of reconstruction rather than an end in itself? And in the almost hypercapitalist counterpoint of Barney’s films, in which this “total process” might be cast as ends not means in this reduction I’m making, does the responsibility for reconstruction, an interpenetration of history and its reflection perhaps, then shift from the man with the movie camera to the spectator herself?

Siegfried Krakauer claims that film reveals through recording, but, because of what you could call an “ontology of images,” this revelation is also a dissimulation in relation to a lived world. Film becomes a self-justifying record defined by and outside of a precise identity between an image and its impressed object. What happens, I wonder, when the visual historical archive becomes film’s content, becomes aestheticized beyond its initial intent? I’m very interested in the Italian filmmakers Yervant Gianikian and Angela Ricci’s work with archival material from World War I in this regard. They’ve restored war images from archives throughout Europe and aestheticized this archive, so to speak, through hand tinting and an original score. Reference is made to the original location, but the images themselves are inscrutable. For example, we see prisoners in an Austrian camp at work--men sewing, baking bread, butchering, dancing together, building carts. The images form a semblance, a viewpoint which is ultimately an anti-war warning, or even parable, according to the filmmakers’ intent. Yet, where does this inscrutability, this illegibility even, come from? Is there something in every image that won’t be given up, and how might this affect an idea of “total process”? Would it depend on the angle of perspective as to whether such an inscrutable historical kernal were the justification or undoing of this self-becoming and self-making?

nice post, it's really interesting for me today, thx