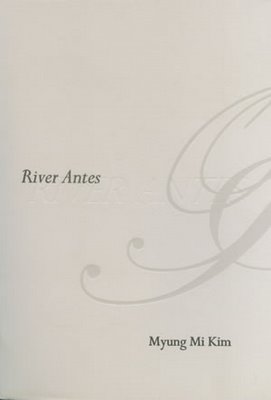 I have long wanted to address the work of Myung Mi Kim, whom I have been reading with delight and devoted interest for over a decade now. Her most recent work with Michael Cross' B-flo based Atticus / Finch Press provides me with an opportunity, albeit brief....

When a section from *River Antes* appeared in Cross Cultural Poetics a couple years ago, what struck me immediately about Kim's new work was not a syntactical or lyrical innovation-- a significant change in the language or content of the work per se-- but the unprecedented and abundant use of two punctuating marks: the double slash ("//"), as well as a mark I'm not sure the proper name of, but which appears as a kind of partition or staff: "|".

As early as Kim's book, *Under Flag*, and throughout her more recent books, *Dura* and *Commons*, the poet has struggled to express language as a time-inhering and shaping material. The ways she has successfully achieved this are quite various, if not innumerable. For starters, Kim expresses durational meaning through a singular use of the space of the page where the reader finds ample tabs and spacings between words: the poet also does so through grammars which stress the palpability of word tenses, and deictical words (words indicative of time, place, and subject); by using inchoate words, phonemes and morphemes, and illegibility to enact states of language both of acquisition (learning to speak a language) and the post-semantic; and in her extensive use of notebooks, where Kim continualy accretes materials for her composition process.

Although Kim has employed punctuating marks before in unconventional and often diacritical ways, I am interested in how significantly punctuation marks seem to factor in *River Antes* and shape the book's meaning. While I am sure that the "|" and double "|" marks delay a reading process-- that is, delay the eye as it reads and processes--I wonder if there is not a deeper import at stake in the use of the marks. Do they mark, for instance, an ontological rupture--difference, trauma? Are they marks of dis-*aster*--the disconstellating of stars, and thus fate and time? I take this to be a possible meaning of the mark in the following from *RA*:

Two pages later, the mark sounds a very different sense to me as it seems to perform another kind of lapse: the time-lapse of a cinematic or photographic process as it reveals a social-biological one--the consumption of corn-on-the-cob:

Kim's scoring is especially meaningful as corn is transformed suddenly into its waste product (corncob) through the phantom objectivity* of the jump-cutting mark. Elsewhere the marks "|" and "||" seem to act as partitions cleaving highly discrete, anti-grammatical word sequences. Are these partitioning marks in fact mirrors?

The mark acts here as a kind of visual and aural rest, if not also the transferential surface of an abandoned dialectics--"spar wanton drear dear forbid" obscuring "hold facing simple adore one"; and "rights tie wallow heaving cause" not having a reflection at all (thereby nothing to be (mis-)identified by unless by absentee itself?).

In *RA* I am also struck by how Kim's concern for duration *qua* articulation (articulation of economic, racial and gender-based oppressions; articulation of "natural" and cultural forces; articulation of the interpollated and language-bearing self undergoing world) is given possibly its most creative book form to date. Through the poet's collaboration with her publisher, Michael Cross, the two have arrived at a form that not only treats Kim's hard-earned words elegantly (as all of her books to date have done), but that may possibly further the poet's project in book form.

Such an innovation becomes most clear in the pages of *RA* that fold out to three separate pages. In these fold-out "triptychs" there is a terrific sense of simultaneity as one scans all three "panels" at once, taking in the diversity of Kim's exquisite word scores and shapes. Among these pages are a variety of forms: on four of the pages the type is centered; on four others discrete words with spaces between them are divided by the mark "||" [as in the above]. On a page I find particularly stunning, Kim has arranged words that have been made partially illegible through photo-copy. In the center panel of my favorite of the five fold-outs the mark "|" and slash marks cascade down the page interrupted by periods and limited spacing, as if the punctuation marks from the book had conspired to form a Concrete poem. In this condensation of markings Kim provides a playful reminder of her ongoing preoccupation as a poet: to relate language itself as a time-based, and thus socially informed, process.

*"phantom objectivity" is a term used by Georg Lukacs to indicate a circumstance in which producer and produced are no longer related in a process, that are, therefore, abstract in their reification.
Posted by Thom Donovan at 9:06 PM

Is it just because I'm a dog owner that I want to read "corncob" as both a noun & a verb? & in that sense also see the partition line as a kind of "projective" springboard (or plank)? (Not that this really adds anything to your already very thoughtful take.--Just a note to say thanks for such an insightful post/blog...)