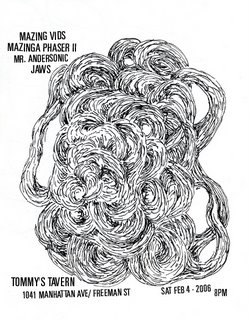 The Saturday before last, February 4th, I had the pleasure of seeing one of NYC's most over-looked and under-published bands in action at Tommy's Tavern in Greenpoint. Mazing Vids are two members, Ryan Byzantine (of Tallboys and Soft on Cuba fame) and Ryan Sovereign (AKA "Redux," of the esteemed Lasereye Stingray and also of the defunkt Soft on Cuba). Their typical configuration has the duo trading off instruments (Yamaha synth. and Fender Jazzmaster) while an 808 drums on. Both players lyricize and (dare I say it!) sing however it is Byzantine who really holds forth, talking psychotically and/or hysterically chanting in a style redolent of any number of post-punk ranters, and particularly channeling (thru years of practiced transmutation) Mark E. Smith (that original of literary histrionics).

Despite their generic company among emergent and established "noise" afficianados, Vids have a particular pop knack, the knack of bands as disparate as Cabaret Voltaire (the early drum-machine based stuff especially), The Clean (and Flying Nun Recs. in general), Desperate Bicycles, Theoretical Girls and others of stripped-down/total-intensity post-punk/electro expertise. What accounts for this knack (among other things) is the entrancing insistence of Sovereign's guitar "lines" whereby the guitarist repeats one riff (or note) thruout an entire song against the grain of the 808 and Chowdhury's lyric weavings. Of the later, the genius of Byzantine's lyrics lie in the artist's singular ability to elaborate within songs as short as two (or so) minutes a veritable set of formal and expressive clarity. As if to break the spell of his (self-induced) siren's song, Byzantine will often take random swipes at the Yamaha or Fender before concluding a song. And it would seem it takes such a gesture for him to return from the mental distances, the distances of psychotic attention, his lyrical performances clearly demand.

Given the duration, intensity and pedigree of the Vids who have played-out with some of the most formidable "art-rock" musicians of their generation (Black Dice, Yeah Yeah Yeahs, and Gang Gang Dance to name but three) I can't help but wonder why they haven't had an EP yet, let alone a full-length. But this is something for the labels (if not historians of NYC "rock") to sort out.
Posted by Thom Donovan at 11:35 PM