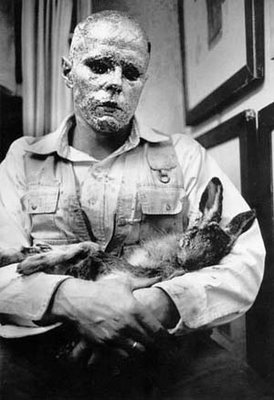 The act of thinking became identical with suffering, and suffering with thinking. From this fact, Nietzsche posited the coincidence of thought with suffering, and asked what a thought would be that was deprived of suffering. Thinking suffering, reflecting on past suffering -- as *the impossibility of thinking* -- then came to be experienced by Nietzsche as the highest joy. But does thought really have the power to *actualize itself* without itself suffering, without reconstituting its own suffering? Does thought itself suffer from its own ability to actualize itself? What then is doing the suffering or enjoying? The brain? Can the cerbral organ enjoy the suffereing of the body of which it is a function? Can the body rejoice in the suffereing of its supreme organ?
-- Pierre Klossowski