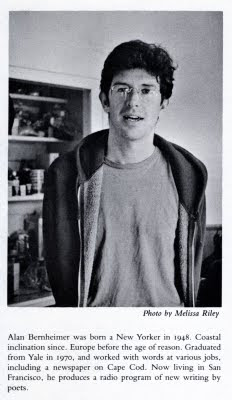 Social histories of poets has always been an interest of mine. Whether Alan Bernheimer is a 3rd generation New York School poet or a 1st generation Language Writer does not matter so much as the fact that Bernheimer is writing and publishing poems again—after a hiatus of nearly a decade—and that these poems are available for our delectation.

Delectation is not a glib critical phrase in the way I’m using it here because Bernheimer’s poetry is all about enjoyment. It is also about an adventure of the mind tuning the senses, exchanging them, inverting them, desynching them—reversing the roles, making them haywire. Synaesthesia rules in Bernheimer’s work, and perhaps that is why he can be easily confused with a New York School poet. Psychadelia is of the hour, it is of practically every line. Sense always negotiating nonsense, and nonsense ideation. His company is Larry Fagin, and Bill Berkson, and Ted Greenwald swerving from the radical cultural movements of the 60s, forward looking at the deconstructions of “a political economy of the sign” in the 70s and 80s.

What Bernheimer shares with Language Writing is a sense of language as a proposition about sense, and how sense-making determines the socio-political. Underpinning each of Bernheimer’s lines is a pun, or, when there is not a pun, a sense of surprise or defiance of expectation that one did not appear. Among my contemporaries there has been a lot of use of the pun towards a political poetry in the last decade or so. I am thinking here of Gregg Biglieri, David Buuck, Louis Cabri, Craig Dworkin, Judith Goldman, Jennifer Scappettone, and Kyle Schlesinger among others—Schlesinger in particular, whose poetry resembles Bernheimer’s own perhaps more than any one else. As I have argued of Schlesinger’s work, and I will say the same of Bernheimer’s: to challenge sense via the pun is always political; it is what undergirds a politics of language insofar as it challenges language’s tendency to become instrumental and representative. Something that stands in for direct action, participation, expression, thinking.

Like Kit Robinson’s work, or Bob Perelman’s, or Lyn Hejinian’s, or Charles Bernstein’s, with Bernheimer there is also a sense that ideas are always affective, and that words—as an abstraction of the real, and as envelopes of the mind—were always bound to our emotional complexes. There is a warmth that radiates from Bernheimer’s work that I associate with the aforementioned writers, though Bernheimer’s political commitments are perhaps a bit more elliptical, his theoretical references a bit less theory laden, his attempt to dissolve the referent in wild significations less performed, more breezy.

I like the term breezy because it underscores an ease or facility of speaking/writing, a kind of grace. What if you could turn le mot juste to all the purposes of language doing philosophy, or simply scoring our least plausible thoughts and sensations? What would any of this prove except that in what we write inheres an incredible potential for language to express non-experience and subtle sensation, to make us dream the actual, to put the real back into what was supposed dream?

Through a logic of language games poetry in the 70s and 80s was able to achieve a distinctly American kind of surrealism—a surrealism beyond the logic of symbols, or the phenomenology of a subconscious; a surrealism of what words can do unleashed from master discourses—of performance, and speech act, and grammatology. With Bernheimer’s recent 'new and selected'—The Spoonlight Institute—we are transported to the beginning again. Of an actual dreaminess that is our everyday having to live with words.
Posted by Thom Donovan at 8:16 PM