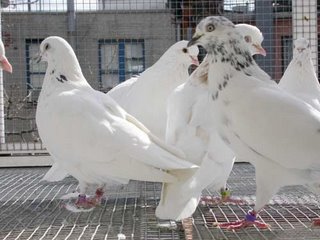 Andrew Levy teaches in the English Department at QCC-CUNY, serving as Faculty Advisor for the student newspaper, Communiqué. He is the author of ten books of poetry, including Ashoka (Zasterle Books), Paper Head Last Lyrics (Roof Books), Curve 2 (Potes & Poets Press), Values Chauffeur You (O Books), and Democracy Assemblages (Innerer Klang). New titles are forthcoming from Factory School, and Innerer Klang. His newest manuscript is Don't Forget to Breathe. He is editor, with Roberto Harrison, of the poetry journal Crayon.

Peace On A is an events series devoted to emergent work by writers, artists, and performers.

“how real or imagined it was real”: E. Tracy Grinnell

In its persistent movement between “clip” and “example,” E. Tracy Grinnell's *Some Clear Souvenir* enacts actuality as it is composed doubly by memory and perception in discrete historical self-experience. Language is a cinematic rack focus whereby the poem alternates between objects in the foreground and the back, memory and immediate data of consciousness, percept and essence. A forming blank* resides between two focal points: perceiving one’s self in the mirror (as one holds up a camera to take a snapshot?) and recognizing the reproduced photogram in the mirror’s frame—the news clipping which wrests a particular instance in space-time. Present perception struggles to cognize concomitantly the photogram affixed in the mirror (and thus also the mirror as exterior frame for perception) and a self involved in a consciousness of its perceptions. The poet/reader inhabits less a pre-subjective “mirror stage” than the point where virtuality and actuality haunt one another in clairvoyance (i.e., clear seeing):

“of four hands or disembodied

motivation that is external

to motion so that one haunts

or is haunted by the actual world”(10)

In Grinnell’s work the quest of a poetics is ultimately the question of actuality’s forms. I am reminded of George Oppen’s late-work—that poet of the “small words”—where space opens both in the poem’s horizon (at the level of line, and between words and phrases within individual lines) and the poem’s vertical axis (between lines and pages) to present thinking as it occurs in language. I am also reminded of poets as diverse as Larry Eigner, Madeline Gins, Robert Grenier, Jessica Grim, Lyn Hejinian, Leslie Scalapino, and Hannah Weiner—who have managed to push poetic technique to the point of a practical and lived phenomenology. A marriage of quotidian revealing and ontological rigor.

To get to the chiasmus of world and self through the shared third-party Experience, sensation turns not inside-out but upon the indiscernible points where one touches the world and both feels themself touching and being touched, acting and knowing itself in action: 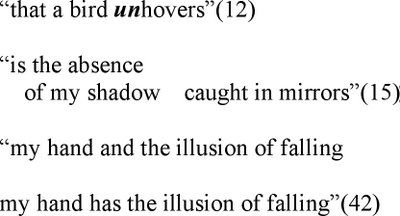 Poetry approaches the limits of interiority where subject and object, interior and exterior, here and there are constituted in the intense lapses of prepositions, conjunctions, articles and other relating words towards the abstract injunctions of grammatical becoming: “newsprint grey / of everything / changes everything”(47). Thought-sensation is formed where the writer touches and is touched, where words risk tautological coevalness. By the play of more and less formal elemental intentions appearing to unfold and unfolding to disappear, Grinnell maintains the mobility of perceptions, sensations, ideas, and memory shards where one might otherwise “see” prehensively, foreclosing the open. Beyond theory *per se* and literary mannerism are lived words the located remnants of actualities, desires, potentia. Where experience touches experience “these locations are history”(65). When words evidence lived duration “rupture is / rapture”(8).

*”forming blank” is a term invented by Madeline Gins and Arakawa.

“No ideas but in effects”*: Andrew Levy

“Out of all the stream of human life
And action

If Andrew Levy’s newest manuscript, *Don’t Forget to Breathe*, seems a clear continuation of the poet’s work—which for the last 15 years has yielded some of the most rigorous poems of “language effects” and tactical (dis)informing—the manuscript also seems a crisis point for Levy’s poetics. I have no doubt that this crisis stems from 6 years of the Bush administration, which has—as Donald Rumsfeld’s infamously mystifying addresses have gone to show—developed an effective poetics of rhetorical abstraction towards the end of Noble Lying: the rule of the hep (if not wise) through calculated dissimulation, disinformation, and distraction.

Reading Eliot Weinberger’s 2005 *What Happened Here*—a must-read chronicle of the W years—one encounters one of the most baldly stated and chilling statements of the Bush doctrine of Noble Lying: "An unnamed ‘senior advisor’ to Bush recently told the journalist Ron Suskind that people like Suskind were members of ‘what we call the reality-based community’: those who ‘believe that solutions emerge from [the] judicious study of discernible reality.’ However, he explained, ‘That’s not the way the world really works anymore. We’re an empire now, and when we act, we create our own reality… we’ll act again, creating other new realities, which you can study too, and that’s how things will sort out. We’re history’s actors, and you, all of you, will be left to just study what we do.’”

Against the actors of “history” so-called and of empire for real, Levy accretes remixes of subject position, address, information, affect, and fact to effect thought and action among his community: reality-based readers, writers, artists, students, family and friends who would work to alter the course of history by halting the current political, social and economic travesties of the United States. To do the voices, in Levy’s case, means butting a multiplicity of voices truthful and false, imagined and real, reasonable and justifiably hysterical against one another in order to reopen the question of how the real is arranged and inscribed. As apocalypse is of the hour in a global cultural imagination, and hope a scarce commodity, I can think of no more responsible way to be conducting one’s self as an artist at this point in history. To intend a new ordering for reflection; to attend a language as much of tactical abjection (proto-Flarf) as felt necessity is not to further suspend reality—to give in to the fantastic, sentimental and anti-intellectual as too much recent writing and art has done—so much as to hoist by their own petards those who would abuse it to gain and maintain power.

There is always the danger
The facts will fall and part


Repeat what cannot be altered
Infinite and misunderstood


If I were the pronunciation of my name
The miseries of human life, tension of nothing
The softening of its existence, of yours
Arrested through mute consonants
Omniscient flood distributing a cultivated
Fragrance able to be fairly complementary
Or vernacular or made less arbitrary
In this undefinable sweetness

It says to me – it is you who incorporate
Domestications committed atrocities
Doctrines of isolation, the perfect boring
Controls of irresistible onslaught and slaughter
Betray continuity and visions of speckled fish
Calm and judicious views that housed
All of nature qua cultural whims given and
Completed – it is you who’s dead

This tasty loyalty?
This secret and secreted polis?


This innocent yet compelling
Permanence